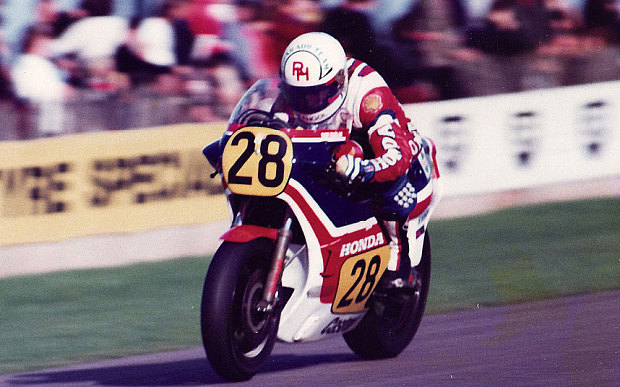 Derbyshire racing legend “Rocket” Ron Haslam is making a special appearance at this weekend’s Donington Classic Motorcycle Festival – and Telegraph readers can get £5 off on-the-gate prices.

To get the reduction, simply quote “The Telegraph” when you arrive at the Donington Park ticket booths, to get £5 off a ticket for Saturday or Sunday (usual price £15) or £5 off a two-day ticket (usual price £25).

He said: “I can’t wait for this year’s event, it gets better and better each year. It’ll be great to catch up with many familiar faces and I’m looking forward to taking part in the parades, and also Saturday night’s entertainment.”

The Donington Classic Motorcycle Festival is established as one of the biggest classic bike events in Europe, with 500 racing machines expected on the swooping Donington circuit over the course of the weekend. The racing is organised by the Classic Racing Motorcycle Club (CRMC), with the emphasis on thoroughbred Grand Prix machines.

Other racing highlights include the UK round of the 2015 FIM Europe Vintage Championship, rounds of the ACU Classic 500cc and ACU Post-Classic 350cc Championships.

The Wheatcroft Trophy, named in honour of Tom Wheatcroft who restored racing to the circuit, goes to the winner of the race for pre-1986 machines, which is expected to be intensely fought. Grand Prix machinery from the 1950s and 1960s will race in the Lansdowne Cup Series. There’s also a race for pre-1972 sidecars.

Alongside the racing there will be a variety of on-track demonstrations of classic two-wheelers, as well as static displays. The Vintage Japanese Motorcycle Club will once again be holding a show in the Exhibition Centre.