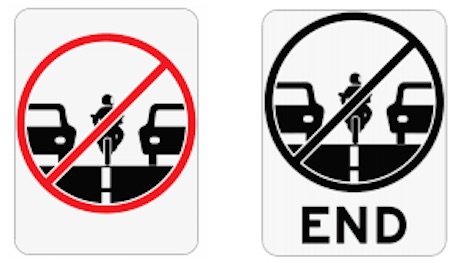 Signs showing riders where legal lane filtering ends and recommences will be erected in Victorian cities when the new laws begin on November 2.

Victoria is the third state of Australia to introduce lane filtering laws along with Queensland and NSW, while the ACT is in the first year of a two-year trial. Several American states are also considering introducing lane splitting, a faster version of lane filtering which occurs in slow-moving  or stationary traffic.

In advance of the new law, the Victorian Government has published the complete list of regulations, including reference to three demerit points for breaches. There is no word about the fine amount.

You can read the full regulations here.

They include signs that show where lane filtering is not allowed, presumably where the lanes are too narrow.

They are indicated with a lane filtering depiction and a big red line through it, Ghostbusters style.

The end to the banned lane filtering zone is indicated by the same sign but with a black line, instead of red, the word “END”.

Hopefully, they won’t become prolific and riders will be allowed to exercise their own judgment on where to lane filter safely.

What we‘d prefer to see are signs erected in all states with lane filtering that alert all motorists to the fact that the practice is now legal.

That might put a quicker end to aggravation by ignorant drivers unaware that lane filtering is now legal and advantage to them by clearing traffic jams.