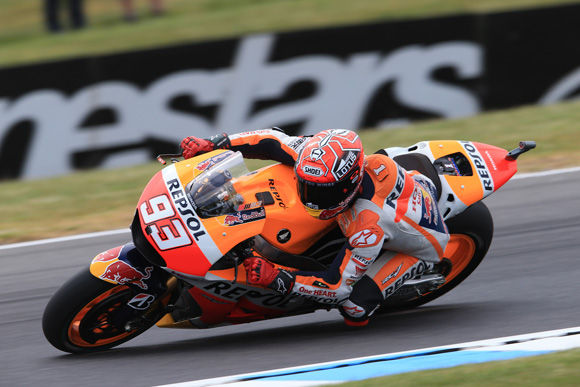 The stars aligned, apparently, as the best race of the year, and perhaps in many years, occurred earlier today at Phillip Island, Australia. After leading the first two-thirds of the race, Yamaha’s Jorge Lorenzo was joined at the front by three other riders, including Marc Marquez (Honda), Andrea Iannone (Ducati) and Valentino Rossi (Yamaha). The drama ratcheted up until the final lap of the race.

Nearly countless overtakes among the top four riders appeared to set Lorenzo free at the front, once again, with one lap remaining. But Marquez had a special lap left, the fastest of the race, and overtook Lorenzo for the win, while Iannone passed Rossi for third and Rossi finished fourth. Roughly one second covered all four riders at the flag.