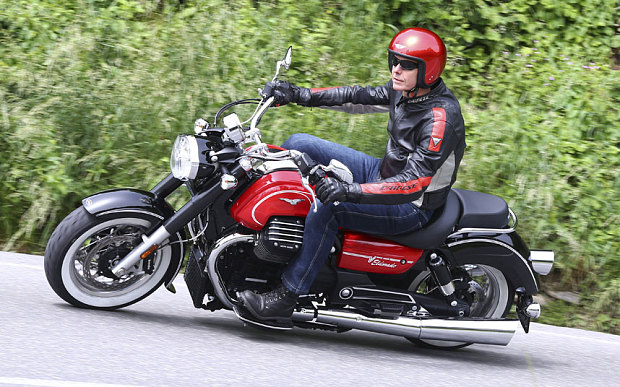 With its high, wide handlebars, big V-twin engine, laid-back riding position and abundance of chrome, Moto Guzzi‘s Eldorado is the closest and most convincing yet European approximation of a Harley Davidson from the Italian firm that has long looked to the United States for inspiration.

Along with its less glitzy sister model, the Audace, the Eldorado is also rolling, white-wall-tyred confirmation that Guzzi, which is now owned by scooter giant Piaggio, is stepping up its effort to become a serious contender in the cruiser market.

It’s not before time from the famous old marque, which has rumbled along on minimal investment for most of the years since it was owned by automotive baron Alejandro de Tomaso in the Seventies. Like Harley, Guzzi has a museum at its atmospheric old factory on the banks of Lake Lecco in northern Italy. But where Harley’s Milwaukee showpiece is bustling and interactive, Guzzi’s contains rows of old bikes that could use a polish and an information plate. Nearby the pioneering wind tunnel, which shaped the firm’s all-conquering Fifties racebikes, looks tired and ignored.

At least some Stateside glamour is rubbing off on the Eldorado which, like the California on which it is based, was shaped at Piaggio’s small design studio in Pasadena. Guzzi’s links with the Golden State go back to the late Sixties, when the original California was created in conjunction with the Los Angeles Police Department. The first Eldorado, released a few years later, was a spin-off civilian model with a larger, 850cc V-twin engine.

This Eldorado is bigger in every way, and follows the two new-generation California models, released two years ago, by being powered by a V-twin engine of 1,380cc capacity. Final drive is by shaft; air-cooled cylinders stick outwards in time-honoured Guzzi fashion. The newcomer has a more extrovert look, its cowhorn bars, chromed tank panels and white-wall rubber giving a more relaxed character than that of the naked California Custom, without the practical screen and panniers of the California Touring.

It’s relaxing to ride too, apart from at very slow speed when the 314kg of weight requires careful manoeuvring despite the helpfully low seat. Beneath the retro look it’s a modern bike with ride-by-wire throttle, cruise control, traction control and choice of three engine maps, which is hardly needed. The softly tuned, 96bhp V-twin has a torque spread as wide as Lombardy, and sweet throttle response even in Veloce (“Fast”) mode. The rubber-mounted engine vibrates at idle then smooths magically, sending the bike forward with an effortless surge of acceleration until it’s cruising long-leggedly at what ever speed its rider’s neck muscles can stand.

Handling lives up to Guzzi’s traditionally high standard, despite the weight and laid-back steering geometry. Uniquely the Eldorado has 16in, wire-spoked wheels, and a narrower rear tyre than the California Custom. This contributes to respectable agility for such a big bike. The respectably well-damped suspension manages to give a comfortable ride, helped by the broad seat. The triple-disc brake system has plenty of power, though surprisingly the front and rear Brembo calipers are not linked as they were on Guzzi’s V-twins in the Seventies.

The Eldorado lacks most of the California Touring’s practical features but has usefully large foot-boards, and can be fitted with accessories including a screen, heated grips and leather panniers. Those would add to the already hefty price of £15,635, another respect in which the Guzzi echoes its inspiration from across the Pond. But if the Eldorado has some of the look and feel of a big Harley, it offers its own subtly different, Italian-accented and appealing take on the chrome-laden V-twin cruiser theme.

Now all Guzzi needs to do is spruce up the museum, dust down the wind tunnel, revamp its sales network and start maximising its rich heritage with some aggressive, American-style marketing techniques like those with which reborn Indian has made a big impact in less than two years. Easier said than done, admittedly, but the Eldorado is a promising and enjoyable start.

VERDICT Laid-back, long-legged cruiser that is expensive and not particularly practical but offers an appealing blend of American-influenced style and traditional Moto Guzzi character

Three stars out of five

This is the archetypal big Harley, combining its 1,690cc V-twin engine with wire wheels, white-wall tyres and other traditonal features echoed by the Eldorado. Gorgeous “Hard Candy” metalflake paint adds £550.

The base model of reborn Indian’s range until recently joined by the blacked-out, £16,499 Dark Horse, the Chief is expensive but beautifully finished, and holds a punchy 1,811cc V-twin engine in a very capable chassis.

Triumph’s 1,699cc parallel twin gives an alternative European take on the American cruiser theme, and is nicely detailed, competitively priced and fun to ride without quite matching the involving character of its V-twin rivals.