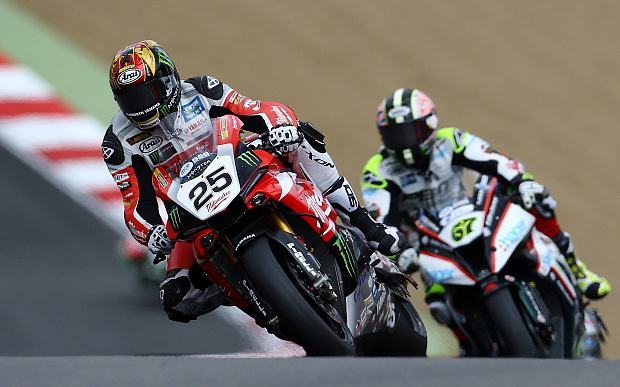 Each rider gets through about £2,500 worth of tyres during a typical race weekend Photo: PA

The MCE British Superbike Championship is widely lauded as the most competitive domestic motorcycle championship in the world. And in my book that makes it the world’s third most prestigious series, behind only MotoGP and World Superbikes.

This is logical enough, given the similarities between the bikes in British and World Superbikes, but the similarities go deeper than that. Both series also run control tyres; that is to say, all teams use the same tyres, and in both series Pirelli is the brand of choice.

Currently, tyres are developed in the World Superbike Championship, with the technology then transferred to British Superbikes for the following season, before filtering down to road riders, giving us better grip and better tyre wear.

The 2015 season has seen several new lap records set. And while improvements to the bikes themselves are a major contributor, the latest advances in tyre technology have also played a part.

I recently got to spend a weekend with the Pirelli team at the Snetterton round of the British Superbike Championship to see just what goes into a typical race weekend for the tyre supplier. 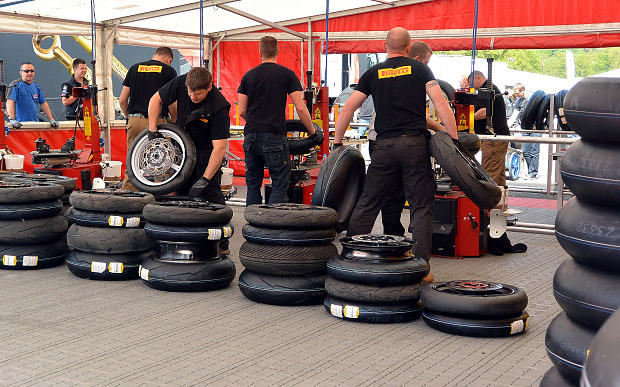 In the Superbike class, each rider has an allocation of six front and nine rear tyres for practice, plus whatever is needed across the two races, which is generally two more rears and two more fronts. If you or I were to purchase the equivalent quantity of road tyres for a 1,000cc superbike we would be looking at a cost of about £2,500.

Another way of looking at it is that the allocation of eleven rear tyres over a typical race weekend is roughly what your average sports bike rider would go through in ten years or, more than likely, even longer.

Pirelli’s commitment doesn’t end with the supply of the tyres. In fact, that’s just the beginning. For the team, the race weekend starts on Wednesday with four staff assembling the tyre fitting and admin areas that will probably be the busiest single off-track location.

Then from Thursday through to the end of the meeting on Sunday there are 16 men and women servicing those 200 race bikes. Typically, the team will complete in the region of 2,000 tyre changes over a race weekend.

The fitting area is run like a military operation; everyone knows their job and everything runs like clockwork. The process is split into four basic functions: bead breaker, tyre picker, fitter, and balancer, with six fitting and six balancing stations.

In the hands of a skilled operative, which all the Pirelli guys and girls are, this is far quicker and every bit as accurate. Each balancer also adds their signature to every wheel they balance, giving traceability should there be an issue. 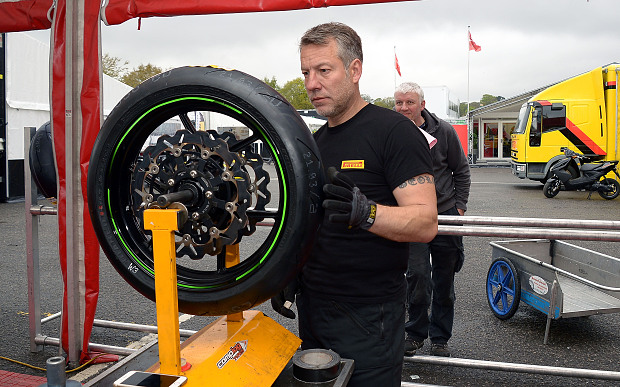 Everything is run like a military operation / Photo: Jon Jessop

On average approximately 15g of weight is added to each wheel to achieve the precision balance required by a high performance racing motorcycle. With 2,000 tyre changes, that equates to 30kg of balance weights used over the weekend. And with the weights being covered with Gaffa tape that means some 200 metres of it is used.

One thing the Pirelli crew don’t take responsibility for is tyre pressures. All tyres are inflated to 90 psi to seal them on the rim, and are then deflated to 33 psi before collection by the racing teams. What pressures the individual teams run at is a closely guarded secret and varies depending on climatic conditions.

Any used tyres that the teams don’t want at the end of the race weekend are taken away by Pirelli and collected by a recycling company; they go into everything from asphalt to creating safe surfaces in children’s playgrounds.

So, next time you watch a round of the MCE British Superbike Championship, be it on TV or trackside, spare a thought for the 16 men and women from Pirelli without whose services the racing wouldn’t be the spectacle it is.

Pirelli is offering a free three-day pass to selected rounds of the British Superbike Championship to anyone buying a set of Pirelli Angel GT tyres. Details can be found at: Pirelli.co.uk