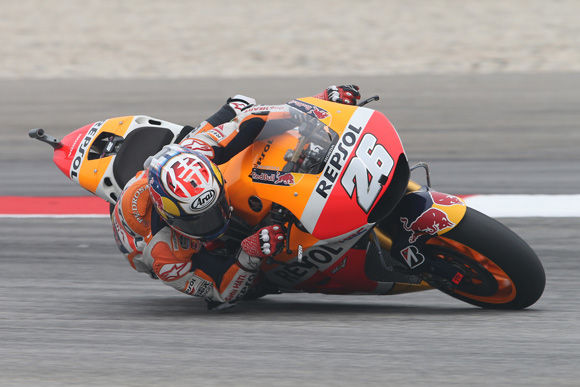 Fighting over 3rd place, Valentino Rossi and Marc Marquez came together with Marquez crashing out. Many race observers believe Rossi deliberately pushed Marquez wide, and then lifted his foot from his peg nearest Marquez and pushed Marquez causing him to crash. You can see a video of the incident here: http://www.snappytv.com/tc/943691/327278.

Race Direction investigated the situation, including review of all available video of the incident and interviews of the riders involved, and concluded that Rossi was at fault. Rossi was therefor given 3 penalty points, which will result in Rossi starting from the back of the grid at Valencia, the final race of the year.

The Sepang race results stand, however, so Rossi will keep his points for third place. This means Rossi enters the final race with a seven-point advantage over his Yamaha teammate Jorge Lorenzo. This article will be updated with more details later today.

Here are post-race quotes from both Rossi and Marquez:

“Marquez knows it wasn’t red mist that caused the incident. It’s very clear from the helicopter footage that I didn’t want to make him crash, I just wanted to make him lose time, go outside of the line and slow down, because he was playing his dirty game, even worse than in Australia. When I went wide and slowed down to nearly a stop, I looked at him as if to say ‘what are you doing?’. After that we touched. He touched with his right underarm on my leg and my foot slipped off the foot peg. If you look at the image from the helicopter it’s clear that when my foot slipped of the foot peg, Marquez had already crashed. I didn’t want to kick him, especially because, if you give a kick to a MotoGP bike, it won’t crash, it’s very heavy. For me the sanction is not fair, because Marquez won his fight. His program is OK because he is making me lose the championship. The sanction is not good, especially for me, because I didn’t purposefully want to make him crash, I just reacted to his behaviour, but I didn’t kick him. You can’t say anything in the press conference, maybe it changes something, but to me this was not fair, because I just want to fight for the championship with Jorge and let the better man win, but like this that’s not happening. Like I said, I didn’t want to make Marquez crash, but I had to do something because at that moment Jorge was already gone. The championship is not over yet, but this sanction cut me off by the legs and made Marquez win.”

“We were having a good race up until the incident. At the beginning I made a mistake, but then I regained confidence. Valentino overtook me, I followed him for half a lap, and I saw that I could go faster than him, so I tried to overtake him back. We started a fight between us and I always passed without making any contact with him. At Turn 14 he passed me on the inside, I sat the bike up, he kept going straight ahead and I saw him looking at me. I didn’t know what to do. Then he kicked out at me, knocking my brake lever, and I crashed. I will leave the sanction in the hands of Race Direction. All I know is that I scored zero points and ended up in the gravel, but thankfully I’m fine. Both what Valentino said to Race Direction and what he did on the track has made me disappointed. I’ve never seen anything like it: a rider kicking another rider. It might be down to nerves, but I want to try to forget about all this and the important thing is that I’m fine physically. I hope, for the sake of the sport that this ends here.”