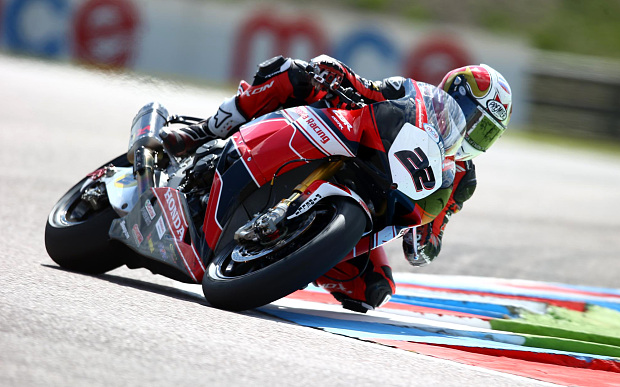 The MCE British Superbike Championship visits Lincolnshire’s Cadwell Park this weekend for the penultimate round of the regular season. Billed as “The Party in the Park”, it promises spectacular action on the “mini Nürburgring” circuit, with the “mountain” section, where bikes become airborne, a particular highlight.

Going into Cadwell, Millwaukee Yamaha rider Josh Brookes heads the championship and is already confirmed for the end of season shootout. He is also the current form rider having won the last four races.

Reigning champion Shane Byrne, on the Paul Bird Motosport Kawasaki, currently lies in second place, 12 points behind Brookes, and is also confirmed to be in the shootout. Coincidently, Byrne had also won four races on the spin when the series went to Brands Hatch, the place where Brookes began his current winning sequence.

Of the 14 races held so far, the pair have won nine between them, making it difficult to see anyone else making it to the top step of the podium this weekend.

At last year’s Cadwell meeting, it was Byrne that performed better, achieving two second places to Brookes’s one fourth place; he was disqualified from race two after crashing on the warm-up lap.

The points gained so far by Brookes and Byrne guarantees they will occupy the top two places in the championship come the end of the regular season. But with 125 points still to fight for, there’s plenty of intrigue lower down the order.

Third- and fourth-placed men James Ellison (on the JG Speedfit Kawasaki) and Byrnes’s teammate Stuart Easton are both sitting Cadwell out due to injury, so there is every possibility that one or both could drop down the leader board and into the clutches of riders with aspirations of a top six finish, such as seventh-placed man Jason O’Halloran.

Ellison expects his broken wrist, sustained at Thruxton, to be sufficiently healed in time for the triple header at Oulton Park in September. Easton, meanwhile, is out with a broken leg sustained at Brands Hatch.

The fifth and sixth places in the championship are currently occupied by Tyco BMW teammates Michael Laverty and Tommy Bridewell, and they will be looking to consolidate their positions. Of the two, it’s Laverty that’s had the upper hand of late.

Elsewhere, it has now been confirmed that American ex-MotoGP star John Hopkins will replace Jakub Smrz in the Lloyds British Moto Rapido Ducati squad until the end of the season.

It’s a virtual impossibility for Hopkins to make the shootout, but with the pace he has already shown, it seems likely that he will take points off those fighting for a top-six finish.

Hopkins crashed while leading race two at Thruxton, having retired from race one when the exhaust on his Panigale blew off. This followed a sixth-place finish first time out at Brands Hatch.

Over in the Motorpoint British Supersport Championship, Luke Stapleford will be looking to continue his recent superiority and further extend his lead in the championship.

Stapleford is currently 28 points ahead of second-placed man Kyle Ryde, with Glen Irwin a further 38 points back in third place.

Coming into Cadwell, Irwin will be full of confidence on the back of positive results at the recent Ulster GP, where he scored two podiums from three starts.