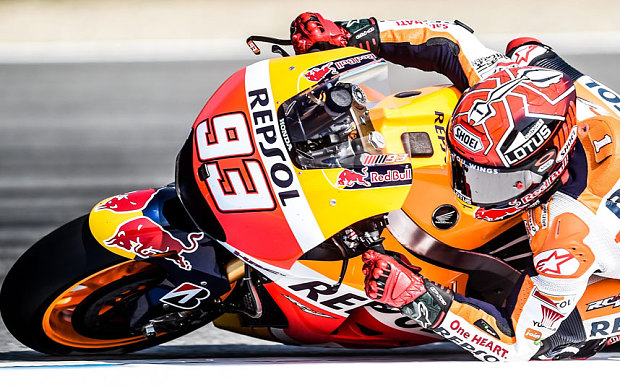 The MotoGP series heads to the Czech Republic and the Automotodrom Brno for round 11 of the 2015 championship.

Valentino Rossi continues to lead, although after last week’s Indianapolis round his lead over Yamaha team-mate Jorge Lorenzo has been reduced to nine points. However, the largest gain was made by Honda’s Marc Marquez, who won for the third consecutive year at Indy. He has now moved to third in the championship, 56 points behind Rossi with eight rounds remaining.

Marquez is now on the same number of wins for the season as Rossi, with three. Over the last three rounds Marquez has amassed 70 points, compared with a total of just 69 from the preceding seven. He has now finished on the podium in three consecutive races, once more than he achieved in the first seven races of the season.

The change in fortune is undoubtedly due to the team replacing the 2015 chassis with the one from 2014, which has given Marquez the confidence and feel required to push harder.

Like Indianapolis, results from recent years would suggest that the Brno circuit favours the Hondas, with their winning streak going back to 2011 with Casey Stoner on board. Interestingly, in the three intervening years Dani Pedrosa has had the upper hand, with two wins to the one of Marquez (Pedrosa coming out on top last year when Marquez only managed fourth place, with the Yamahas of Rossi and Lorenzo between them).

Once again at Indianapolis Rossi was his own worst enemy, only managing to qualify in eighth yet again and therefore leaving himself a mountain to climb on race day. The eventual battle he had with Pedrosa for third proved to be probably the best battle of the race.

With Marquez, Lorenzo and Pedrosa all enjoying something of a resurgence, it will be crucial for Rossi to qualify well at Brno. He really needs to be no further back than the front two rows for the race on Sunday.

Regardless of qualification, however, Rossi’s saving grace could be the weather. The current forecast is for rain on race day, and wet weather is normally a condition that Rossi excels in.

MotoGP standings ahead of round 11

In the Moto2 supporting series, Johann Zarco goes to Brno with a 71-point over nearest rival Alex Rins, who in turn has a three-point advantage over third place man and defending champion Tito Rabat.

With Zarco having such a commanding lead, it looks as though the fight will be for who finishes second. Thomas Luthi in fourth on 109 points and Britain’s Sam Lowes in fifth on 107 can’t be ruled out of that particular battle just yet.

Last year’s Brno race was won by Rabat, something he really needs to repeat if he is to regain his crown. Zarco, however, has a good record at Brno, despite not having the most competitive machinery.

The 71-point lead that Zarco holds at the head of the championship is actually the biggest across all three categories. The standings going into Sunday’s race are:

Despite a 21st place finish and consequently no points, Britain’s Danny Kent continues to lead the Moto3 championship.

Although his lead over Enea Bastianini has been reduced to 56 points, Kent remains the favourite for the title. Once again at Indianapolis Kent was favourite for the race win until rain at the start forced an impromptu wheel change which didn’t go smoothly – and from which it was virtually impossible to recover.

Kent has revealed this week that he is currently considering an offer to move to the blue riband MotoGP class in 2016. Australian Jack Miller made a similar move this season – bypassing the intermediate Moto2 category – and so far has found the transition difficult.

Kent is undoubtedly hot property at the moment and one thing that is for sure is that he won’t be in the Moto3 class for 2016.

Moto3 standings ahead of round 11