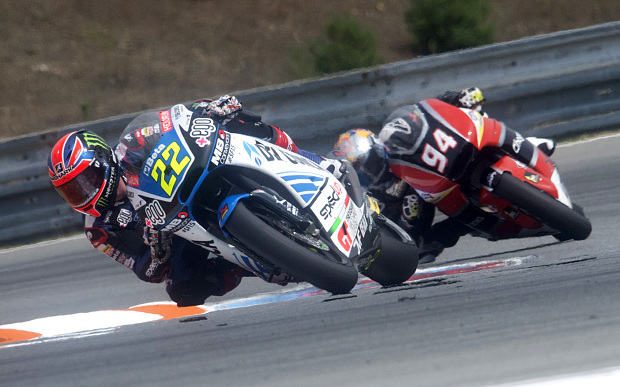 Britain’s Sam Lowes will be looking to improve on his seventh place of last year Photo: Getty Images

As Moto2 heads to Silverstone, it’s a Frenchman who is dominating. Johan Zarco currently leads the championship by 79 points, having won four of the 11 races to date. But even more impressive, and the biggest indication of his supreme consistency, is the fact that he has now finished on the podium in each of the last 10 races – a record for the Moto2 class.

Zarco has also perfected the art of finishing ahead of his title rivals; at every round since Argentina he has extended his lead at the head of the championship.

The fans at Silverstone will, however, have home-grown talent Sam Lowes to cheer on. And like his Moto3 compatriot Danny Kent, Lowes will have a dedicated stand for his supporters.

Last year, Lowes, in his rookie season, finished a creditable seventh at Silverstone. But what impresses most about Lowes’s performances so far this season is that he runs a Speed Up Chassis; in a class where the riders all run identically-tuned Honda CBR600 engines, the chassis is all important, and Lowes is currently the only rider in the top 10 using the Speed Up. The remaining nine all use the Kalex chassis, as do 17 of the current top 20.

Lowes is currently eight places and 71 points ahead of the next rider on a Speed Up, Spain’s Julian Simon.

To date, Lowes has been the sole Brit in Moto2, but that will change this weekend, with Kent teenager Bradley Ray making his GP debut as a wildcard, one-off entry.

Ray will take on the role of Cinderella, working at his day job as a builder, before heading off to the ball on Sunday on his FTR Moto2 machine. Your fairytale rags to riches story it may not be, though, with Ray knowing only too well that his chances of a top-10 finish are remote.

Instead, success will be bettering the lap times of Gino Rea, who used the same chassis at the 2013 British GP. Even if Ray achieves this, he will be two whole seconds behind the lap record set by current series leader Zarco in that same 2013 race.

It’s also going to be difficult for Ray because he has no data from previous rounds to work with. And although he has tested the chassis with a stock CBR motor, he will only receive the race engine from Dorna on Thursday.

Also unlike Cinderella, Ray has no fairy godmother lending him a hand. Instead he has supportive parents, a very generous personal manager, a benevolent chassis owner (the chassis is on loan) and an of-the-moment phenomenon: crowd funding.

It’s estimated that the whole weekend will cost in excess of £20k, with Ray hoping that a strong performance will lead to a full-time ride in next year’s championship. If anyone out there is keen to support the young, up-and-coming rider, donations can be made through the website www.thefabcrowd.co.uk.