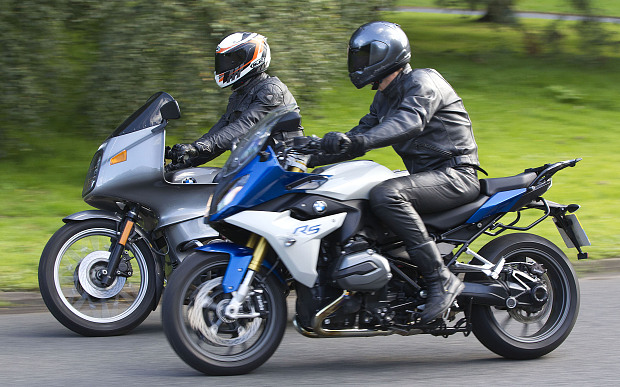 Both have two-cylinder engines, but chassis design has come a long way Photo: Jeff Gilbert

The latest BMW sports-touring boxer has a lot to live up to. The R1200RS shares its initials with the R100RS that revolutionised motorcycling in 1976, when it became the first series-production bike to be fitted with a full fairing.

Park the old and new RS models together and the family link is clear, not least from the shared engine layout that combines sticking-out cylinders with shaft final drive. But there are many differences too, ironically including the fact that instead of following its futuristic forebear with a full fairing, the R1200RS makes do with a less substantial half-fairing.

Almost 40 years ago, the 980cc R100RS was an extraordinarily advanced superbike with a price tag to match: at £2,899 it cost more than twice as much as the mighty four-cylinder Kawasaki Z900. Its latest relation is less glamorous. The R1200RS is essentially a half-faired version of the naked R1200R, also released this year, and is powered by the 1,170cc, liquid-cooled engine introduced three years ago in the R1200GS. 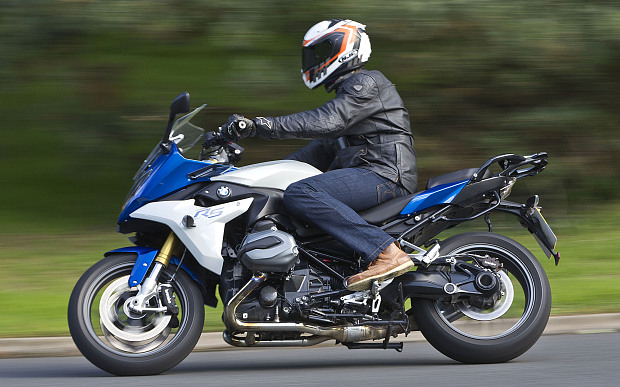 The R1200RS is far more agile, and has more grip and ground clearance

Despite the R100RS’s advanced design, riding the two boxers back-to-back emphasises how far bikes have advanced in four decades. The newcomer’s eight-valve unit produces 125bhp with a broad spread of torque. In the case of the top-spec Sport SE version, it’s enhanced by a gearbox quick-shifter that works seamlessly on both up- and down-changes. As well as being thrillingly quick, to a top speed of about 140mph, the modern RS is smooth, refined and comes with multiple engine modes plus traction and cruise control.

The R100RS’s air-cooled, pushrod-operated engine produces just 69bhp, but that’s enough to make a well-preserved and original example like this one – which is owned by Telegraph managing editor Ian Marsden – enjoyable and respectably fast. Naturally, its acceleration is less dramatic, and its five-speed gearbox requires deliberate use of the left boot. But the older boxer engine remains flexible and reasonably smooth towards the bike’s 120mph top speed.

There’s a more obvious difference in chassis performance. In the R100RS’s day there was much to admire about a bike that combined high-speed stability with levels of handling and ride quality that few rival superbikes could approach. All these years later the elderly boxer’s conservative geometry, 19-inch front wheel and shaft final drive make it seem ponderous, despite its slight weight advantage and narrow tyres. 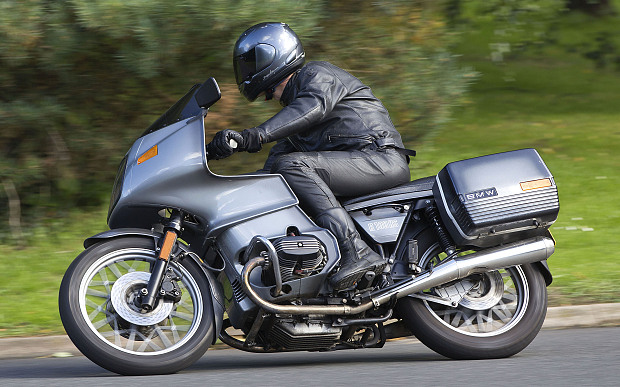 Meanwhile the R1200RS is far more agile, has much more grip and ground clearance, and in Sport SE form has suspension that can be fine-tuned at the press of a button. And its powerful brake set-up of radial four-piston Brembo front calipers and efficient ABS makes the older bike’s combination of small front discs and calipers seem worryingly feeble.

But the R100RS fights back with that ground-breaking fairing, which BMW developed at great expense in Pininfarina’s wind tunnel in Italy. The relatively sporty riding position dictated by fairly low and narrow handlebars means the rider’s chest and hands are efficiently protected, allowing relaxed high-speed cruising that is impressive now and was game-changing in 1976.

By contrast, the modern RS offers only partial protection for its rider’s hands and legs. And although the screen can be manually swapped between high and low positions, even the higher setting generates turbulence for tall riders, partly because the new boxer’s riding position is more upright and its bars are higher and wider – which is useful in town but less so at speed. 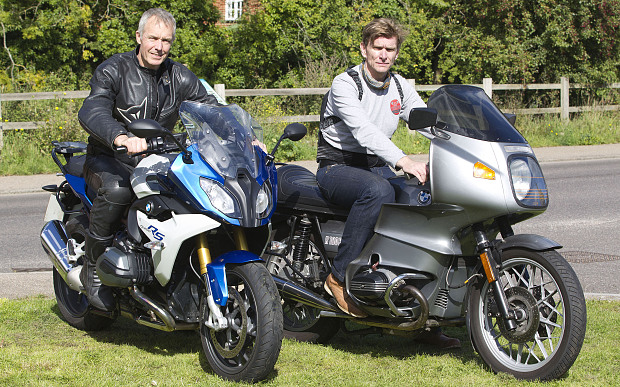 Roland and the owner of the 1976 RS, Ian Marsden, compare notes

It’s hard to escape the conclusion that the R1200RS is compromised by sharing so much with the naked R1200R. Further evidence comes from a fuel capacity of 18 litres that limits range to 150 hard-ridden miles while its ancestor, holding 30 per cent more, manages more than 200. At least the dual-seat is similarly broad and comfortable, and incorporates solid pillion hand-holds.

Despite those RS initials, the modern machine that most faithfully updates the R100RS’s blend of boxer-engined performance and fully-faired comfort is not this R1200RS but the more touring-oriented (and expensive) R1200RT. This latest member of the RS family is more all-rounder than dedicated mile-eater but it can shine on longer trips, especially if fitted with luggage.

And there is one area where the new RS outclasses the old: price. In 1976, specifying the optional alloy wheels put the R100RS into rarefied £3,000-plus territory. (A good, original example like this is worth roughly £4,000 now.) The R1200RS costs from just under £11,000 for the basic model to £13,000 for the Sport SE. So although this latest RS won’t replicate the impact of its illustrious ancestor, it’s a worthy successor with a more down-to-earth appeal.

Verdict: Sports-touring boxer that offers lively performance, all-round ability and value for money without approaching the game-changing brilliance of its exotic RS forebear

The R100RS’s spiritual successor is the fully-faired R1200RT, which shares the R1200RS’s 125bhp engine and provides improbably agile handling plus outstanding comfort, albeit at a higher price

This latest in Honda’s famous sports-touring family produces a relatively modest 104bhp and lacks some of the R1200RS’s features, but handles well and complements its versatility with appealing V4 character

The sports-touring derivative of Kawasaki’s naked Z1000 is popular for good reason, offering 140bhp performance, sound handling and competitive price but not quite matching the RS’s all-round ability