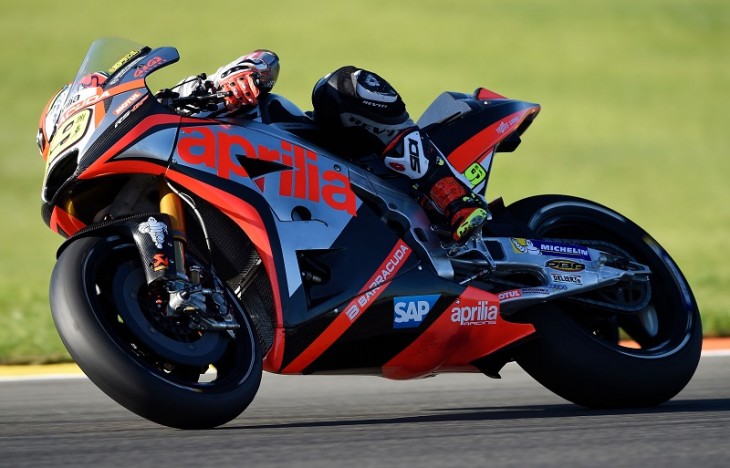 Valencia, 11 November 2015 – The virtual shift from the 2015 season to the 2016 MotoGP season took place at Valencia, the track that hosted the last race of the season and the two days of testing which ended today. There were two new items that Aprilia Racing Team Gresini focused on, under the technical leadership of Romano Albesiano, Aprilia Racing manager: the new Michelin tyres and the single electronics package, both changes that will go into effect for everyone next season.

Alvaro Bautista and Stefan Bradl put in a lot of laps over the two days, working hard astride their RS-GP machines that they rode to finish out the 2015 championship, whilst awaiting the arrival of the new Aprilia prototype that will race next season. These were demanding trials that also included a few crashes, fortunately without any physical consequences for the riders.

In the afternoon of the second day of testing Mike di Meglio also took the RS-GP out on the track for his first contact with the Italian MotoGP bike. The French rider put in 28 laps.

“These were two very intense days with the big change being the tyres and we still need to do a lot of work on them. The rear end performance is already quite good, but there is still a lot of room for improvement on the feeling with the front end. We will definitely have to change a lot both in terms of settings on the bike and riding style. To take the best advantage of the new tyres you have to favour braking with the bike straight. They have different characteristics compared to what we were accustomed to and it will take time to find the right compromise.”

“These were definitely two demanding days of testing because the Michelins have a very different feeling than what we were accustomed to, especially the front, and that caused a lot of crashes. So we worked a lot on the bike setup to try and improve this feeling and to get the tyres to work as best as possible. We worked on fork adjustments, geometries and weight distribution. We still haven’t achieved the results we had hoped for, but it was important to begin this job. At the end of the month we’ll go to Jerez so we can continue this adaptation process on another track as well.”