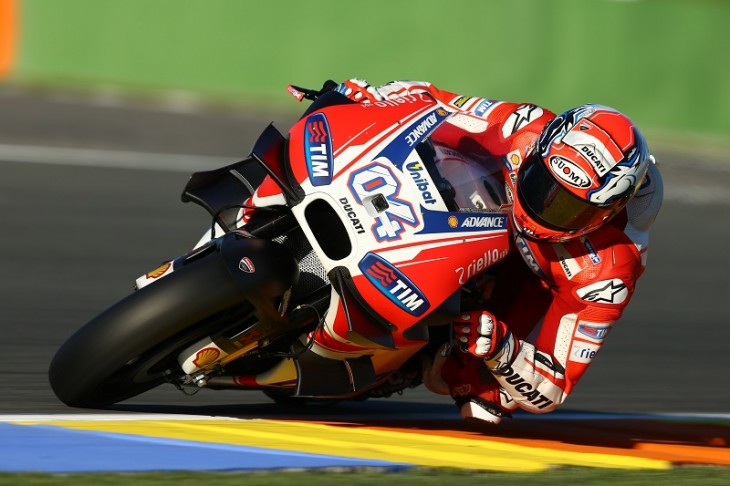 Two days of IRTA tests, which marked the official start of the 2016 MotoGP season, have come to a close at the Ricardo Tormo circuit in Valencia.

Andrea Iannone and Andrea Dovizioso continued with chassis set-up work on their Desmosedici GP machines, to adapt them to the 17” tyres from Michelin, the new one-make championship supplier. In the morning Iannone was the victim of a harmless crash at Turn 5 during his second lap, but afterwards he continued to lap constantly together with his team-mate Dovizioso. Towards the end of the day the two Ducati Team riders went out on track again to try the new unified software, which will be obligatory for all teams starting from next year’s championship.

Both men improved on yesterday’s times: Andrea Iannone finished the test with a time of 1’31.619, which put him in ninth place, while Andrea Dovizioso was fifteenth quickest in 1’31.967.

The Ducati Team will be out on track one more time in 2015, before the two-month test ban from December 1 to January 31 comes into force. The Italian squad will in fact head to Jerez de la Frontera for a test session at the end of this month: Andrea Dovizioso will test for just one day on November 27, together with the Ducati Test Team test-rider Michele Pirro, who will also be present on the previous two days. Andrea Iannone on the other hand will have to embark on a period of total rest after he undergoes an operation on his left shoulder on Tuesday November 17.

Andrea Iannone (Ducati Team #29) – 1’31.619 (9th), 61 laps
“I am pleased with how well I got used to the Michelin tyres: overall I’ve got quite a clear idea on the riding style you have to use and in next year’s tests I feel sure we will continue to make progress. Today we also tried the unified software and in the end it went well because I always managed to improve, and we did other chassis set-up tests, using the bike the way it was during the race weekend. I am quite satisfied, but not with the final result because my goal is to always be amongst the best, and instead a ninth place does not live up to my expectations.”

Andrea Dovizioso (Ducati Team #04) – 1’31.967 (15th), 62 laps
“It was an important test because we had to get a good idea of how the new Michelin tyres behave, and that’s the most important thing at the moment in order to be able to go strongly. In these two days we have worked a lot and I believe that we have managed to give important feedback for the development. Towards the end of the day I also used the new software, which is a bit different from what we were used to, but all things considered I felt OK and I am happy with the way things went.”