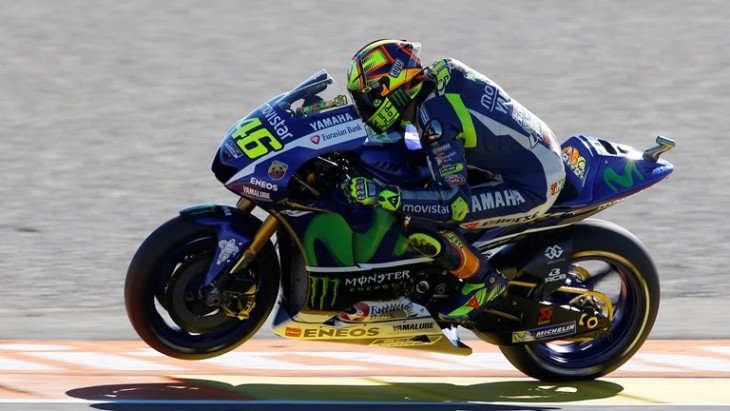 Movistar Yamaha MotoGP’s Jorge Lorenzo and Valentino Rossi headed out on Circuit de la Comunitat Valenciana – Ricardo Tormo this morning and were able to make a big step in the afternoon as they tested the 2016 YZR-M1 machines, with the fuel tank on the back of the bike, new front forks and the mandatory electronic software for next year’s season.

Following the same procedures as yesterday, Lorenzo was the first of the Movistar Yamaha MotoGP team-mates to make his way out on track. It didn’t take him long before he confirmed his key protagonist status as he briefly took over the top spot. He spent the majority of the day on his 2016 bike and completed a total of 48 laps. Throughout the day the Spaniard bettered his time to a 1’31.282s on his penultimate lap to complete the day in fifth place, 0.222s off the front.

Team-mate Rossi also had a productive second day of testing. He energetically tackled every item on today’s schedule and completed more than two full race distances. As the day progressed he adjusted the settings of his bikes to match the Michelin tyres and clocked a personal best lap of 1’31.498 on lap 57, moving him up to sixth place, 0.438s from first. Rather than focusing on bettering his time, the Doctor ended the day collecting valuable data with a steady final run on the 2016 machine and was pushed back to seventh place by a late flurry of activity.

Today’s results secured Lorenzo and Rossi fifth and seventh place respectively in the overall combined practice times. They now look forward to returning home for a well-deserved break during the winter stop after a long season and hard work during the Valencia test.

“The 2016 machine we tried in Aragon is the bike that’s adapted to the Michelin tyres to get the best performance. The fuel tank is on the back, behind the seat, before it was in front of the rider. Today we focused on the electronics, as our lap times are still half a second slower than the lap time we made with the old version. The other thing we worked on is the front tyres of Michelin, which we are still trying to improve. I felt for example that under braking the rear is very grippy in the centre of the tyre but when you start leaning with the front whilst still braking, the front gives you more instability and you can’t push so much with the brakes. I used the 2016 electronics all day. Yesterday neither the power nor the engine brake was giving the best performance, so they worked on that for the next morning and today I felt that it was much better and we improved quite a bit during the whole day.”

“The second day, for us, was quite positive. It was a long day, I did a lot of laps and I tried to improve my feeling with the new tyres. I’m quite happy because in the afternoon my lap times were not so bad. I did long runs to understand the tyres and I was always quite fast. We improved the bike a lot compared to yesterday and the tyres, especially the front gave a better feedback and this is the most important. We also worked a little bit on the electronics systems for next year, which has already improved a lot compared to yesterday, but we still have work to do. For me we need to continue to work, because it looks like we are a bit more in trouble with the Michelin tyre, especially corner entry and weight distribution. For sure, this is just the first step, but it’s not so bad because we improved by a second compared to yesterday so we just have to make some more kilometres.”

“It has been a good second day of testing. The riders focused on coming to terms with the new electronics and setting up their bikes for the new Michelin tyres. We saw them make big improvements compared to yesterday and the team was able to provide both Jorge and Vale with a setting that gave them a better feeling. Yamaha’s Japanese engineers will gather all the data we have accumulated here over the last two days and work towards making another step in the next test. Our work is not finished yet, most likely we are going to have another test before the end of this month. After that we will have a well-deserved holiday to recharge our batteries for the next year.”

Monster Yamaha Tech3 Team rider Pol Espargaro successfully wrapped up his final appearance on track for the year at the Ricardo Tormo circuit today with a run to 8th position. The Spaniard partially sampled his new Yamaha YZR-M1 MotoGP bike for the 2016 season and continued his work with the Michelin tyres in order to start collecting valuable information for next year. Espargaro’s best time of 1’31.619, which he set on his penultimate lap, saw him close the test in 9th place in the combined standings, which a gap of just over half a second to the time at the top of the field.

Meanwhile, Bradley Smith began his in-depth and methodical work with his new MotoGP bike for the forthcoming year whilst also continuing to the test the Michelin tyres. The Briton rode relentlessly and eventually completed more laps around the circuit than any other MotoGP rider today, outlining his intent to understand his new Yamaha YZR-M1 as well as the tyres fully. He set a personal best time of 1’31.694 which was only 0.075 from his teammate and now the 24 year old rider confidently awaits the next outing at the three day Sepang Test in February.

“Overall, I am quite satisfied with what we achieved in the test, although, of course, there are many factors to improve in the future as it was just the first time on the new bike with the new tyres. The day didn’t start perfectly as I fell in the morning which made me lose a bit of time, but the team repaired the bike quickly. Then, together with the Michelin guys, we started to work on getting a better feeling in the front and achieved our goal. I was able to set a solid lap time and although it wasn’t incredible, I’m very pleased as the rhythm was good and we must remember that it was only the first two days of pre season testing so we can be satisfied with our performance. There are a lot of things that can change in the future, plus I need to adapt my riding style more to suit to the Michelin tyres. Also, I think that the riders who were using softer tyres this season, have a slight advantage at the moment as they are used to a higher level of rear grip compared to us and that’s definitely a characteristic of Michelin tyres. However, altogether I’m satisfied with how this test went, but we need to bear in mind that all tracks are different and Sepang is very dissimilar when compared to Valencia, so we will see how things go in February. Nevertheless, I am already looking forward to getting back on the my Yamaha after the winter break.”

“We can be pleased with what we have achieved and it was a big day where I completed 71 laps as we focused on my new bike for 2016. The team and I needed to understand what sort of Yamaha we will ride next year, which in all honesty, was a big task as we had to go through everything thoroughly. This wasn’t necessarily to make things better instantly, but it was for knowledge which will help to prevent any potential issues in the future. After last year, we know how vital this is and hence, this is why I rode so many laps. In the end, we ran out of soft rear tyres so I had to use the hard compound, but I was still able to improve my time from yesterday even though the conditions were a bit tricky in the last hour here. In addition, we should only compare my lap time to the other satellite riders as we had just two front and rear compounds available, while the factory guys had more options to try. Altogether, I’m satisfied as it has been a positive day and we now have a very good understanding of the bike as well as a solid base to start 2016 with. It’s time to pack away my M1 for the winter break and I look forward to seeing it again in February!”