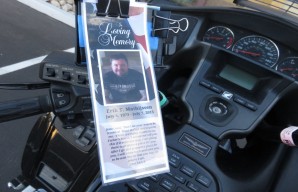 On a Goldwing, Williams Arizona.

While checking into our hotel in Williams, Arizona, after the first day of our 16-day road trip, we started talking to a guy named Josh. He told us he and many others from all over the county were in town for the memorial service for a fallen war veteran. Their group is composed of ex-military veterans or ex-military contractors that support and fight against terrorism as patriot Americans.

Later that night while walking back from dinner we passed the memorial gathering and talked to several more members. Both my wife, Sheila, and I gave our condolences, and one guy handed us a prayer card for the fallen vet, Erik T. Mathijssen. 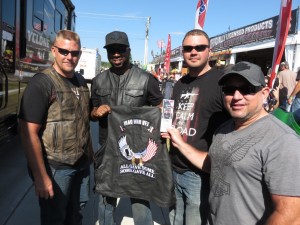 USMC Gunny Sergeant Mathijssen, who had served multiple combat missions in Iraq and Afghanistan, passed on Monday, July 7, 2015, just one day shy of his 42nd birthday. His last motorcycle ride ended that fateful night when a car making a left turn pulled out in front of him. Erik’s last ride never finished, it stopped!

Maybe it was because he was ex-military and a motorcycle rider that my wife and I felt a deep connection to this man whom we had never met. I read his prayer card several times, and on the back it said “I’m Free.” Isn’t that the feeling we all felt when we started riding? That morning I told my wife we were taking Erik with us for the rest of our 5,000 mile trip, so we clipped his prayer card to the side of the windshield and off we rode. 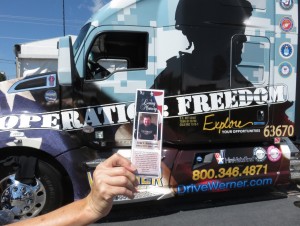 We were going to take Erik’s spirit with us, a ride to remember, and one that would have a happy ending. We rode up to the Grand Canyon and later to Four Corners, where we ran into four of the guys who had attended Erik’s service. We introduced ourselves and told them we were taking Erik to South Dakota, Montana, Washington and then back to California with us for the rest of our trip. They saw the prayer card clipped to the windshield of my Gold Wing, and one of them said, “He’ll be traveling in style.” We took a few pics with them and we all left in the cold rain.

We traveled through Durango and Pagosa Springs, where we stopped for the night. The next day we visited our son, who is currently based in Canon AFB, and his wife in Clovis, New Mexico.

The following day, the air was hot as we rode up Interstate 25 to Denver. Erik was getting a front-row view. We finally made it to the Black Hills, where we stayed for several days. In town we told our story about Erik and asked a number of people if they would pose for a picture. It seemed everyone could relate and nobody refused.

On to the Beartooth Highway and Yellowstone, the weather was spectacular and the roads dry. Heading north to Glacier National Park and up and over Going to the Sun Road, we had another outstanding day. From Missoula, we turned West on State Route 12 and took the LoLo pass into Kennewick. 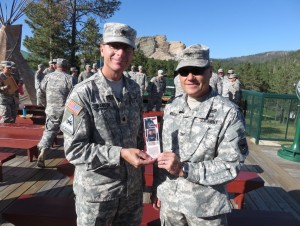 U.S. Army at Crazy Horse, in the Black Hills

The air was heavy with smoke, but we managed to get through the pass before they closed the road. It seemed like someone upstairs was looking out for us too.

Finally making our way to the coast we stopped in Astoria, with a calm sigh of relief as the cool air brushed our faces. Riding south on State Route 101 we drifted over 300 miles of the Emerald Coast, stopping at the Tillamook cheese factory and numerous other places.

We passed more coastline and multiple stands of Giant Redwood trees as Sheila and I continued south with Erik still clipped to the windshield. I must have looked at the back of Erik’s prayed card a hundred times and read the words “I’m Free” because that’s what my wife and I felt. No time schedule, no appointments, no meetings, just being one with nature and the calling of the road. 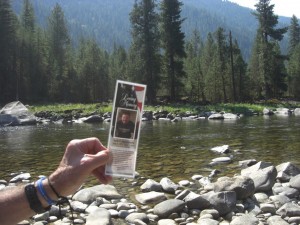 The date was August 16 when we arrived home in California, 41 days after Erik started his last ride. We stopped by the beach and took several more pictures. This day, both our ride and Erik’s was finished. It was our honor to share this ride with him.

Now you can rest in peace, USMC Gunny Sergeant Erik T. Mathijssen. Your journey is over.