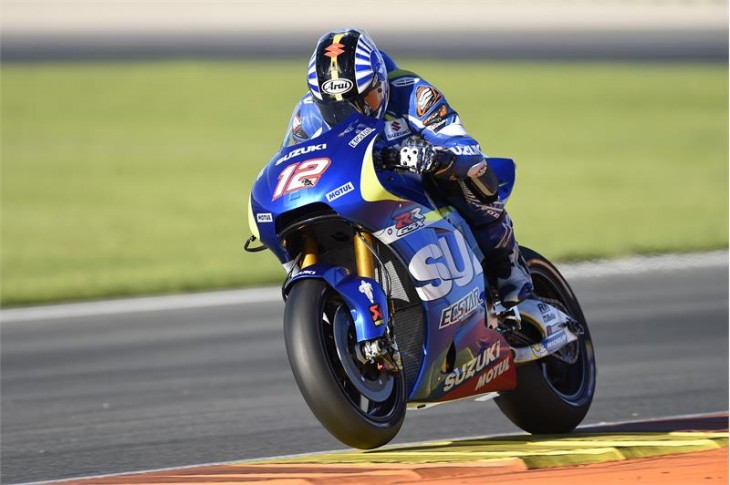 The 2016 season started today for MotoGP™ at Valencia in Spain as Aleix Espargaro and Maverick Viñales took to the track for the opening session of the official tests.

The main change for Team SUZUKI ECSTAR and the other teams was the use of Michelin tyres – today marked a change in the Official Tyre Supplier – with the French brand coming back into MotoGP™.

Espargaro has already had the opportunity to test them during the year, but the new tyres were a ‘first’ for Viñales, who was impressed and very positive by their performance. Today’s work mainly focused on getting the riders’ first impressions about the new characteristics; and running their machines with the same set-ups from Sunday’s race.

Both the riders reported a positive feeling; not only the GSX-RRs will have to be adjusted, but also the riding style will need modifications, as the reported feeling from both riders is that the grip has improved on the rear, while the front still needs further improvements.

Team SUZUKI ECSTAR’s positive feeling is backed-up by the positive results in terms of lap times: Viñales scored a personal best at 1:31.720, which set him in the fourth place of the classification, only 0.168 from the leader. Espargaro was well in the top-10 also, with a personal best of 1:32.005 that put him in ninth place, less than half-a-second from the leader.

Team SUZUKI ECSTAR was joined at Valencia by SMC test team riders Nobuatsu Aoki and Takuya Tsuda. The two Japanese are supporting the Factory riders in the development of the set-up for the new tyres but they are also testing the new unified software that will be introduced next year.

According to the team’s plan, Espargaro and Viñales are focusing only on tyres and will start testing the new software later, hopefully in a private test that will take place in Sepang, Malaysia on November 23rd and 24th.

“Today we have focused mainly in finding the feeling with the new tyres and my judgement so far is very positive and I feel comfortable with them. I could have been more effective in the braking as the rear is so stable, allowing me to be effective in the entrance of the corner and also in corner-speed. The character of these tyres is different from the previous ones, we need to better-understand how they react and the crash I had today is proof of this: I suddenly lost the front without any warning; my feeling is that they have much-more grip at the rear but still some uncertainty about the front. This will affect my riding style because I will probably have to load the front more to keep it more stable.

“In the afternoon we started to introduce some little adaptations in the set-up and the electronics to see the reactions and to prepare tomorrow’s job. But I think we can be satisfied with today, we did a good job with a good fast lap-time, but also the consistency is very good, when the tyres get worn I still feel I can trust them.”

“This day has been a little strange because it’s the very first time in my career that I have crashed twice in the same day. Of course, new tyres mean a lot of work to adapt the riding style because their behaviour is pretty peculiar; now we have a very good performing rear-end and a front that still needs improvements. In fact, the two crashes I had were due to a sudden lack of grip at the front.

“For sure, the riding style has to change; I need to push more in the front and to take advantage of the positives of these new Michelins. To have much-more grip at the rear means that I can take the bike up immediately at mid-corner and open the throttle earlier. Of course we need to also change the machine’s set-up; so far we focused to get our impressions of the tyres without major improvements in the bike, so we will now start to change the machine.”