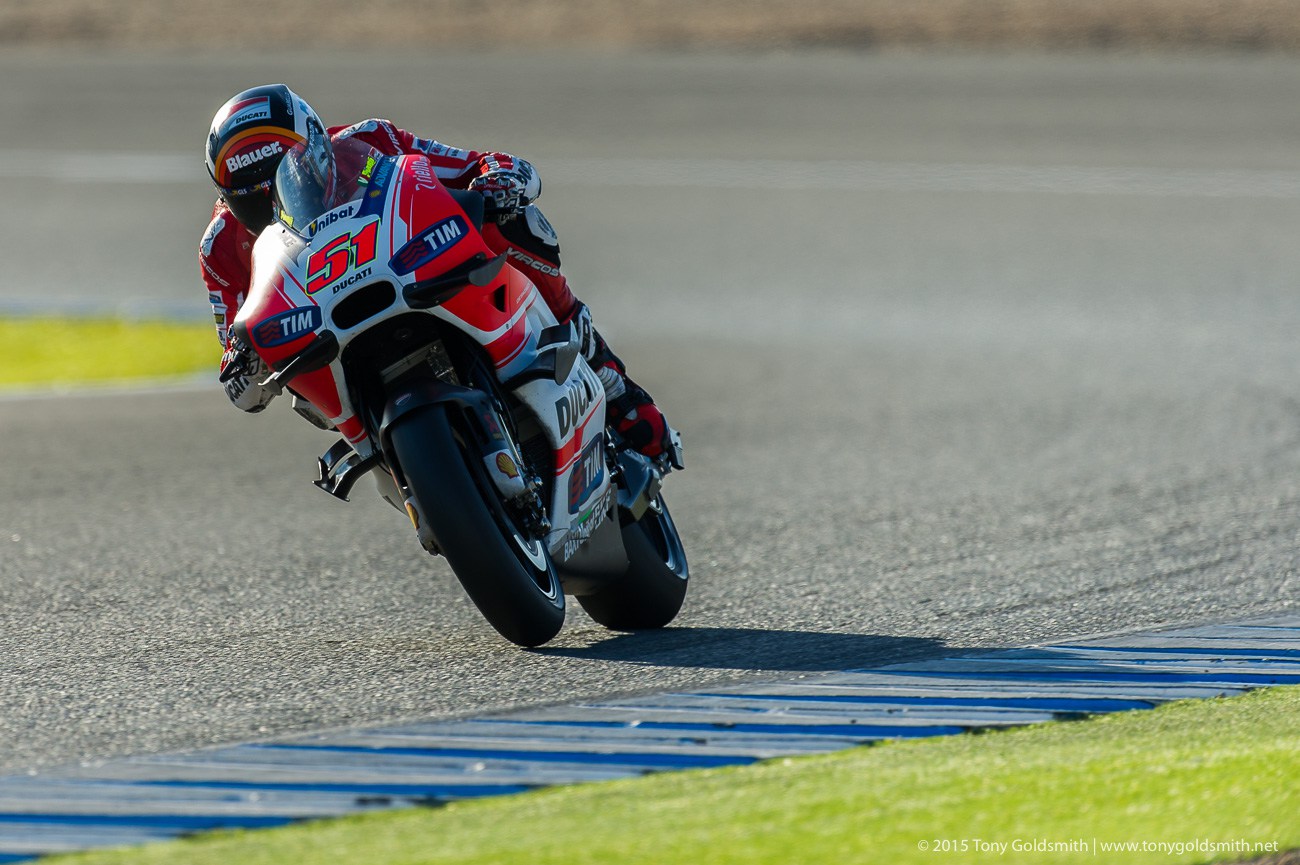 So, testing is over and the winter test ban can start. Riders who intend to race in 2016 are banned from testing between December 1st, 2015 and January 31st 2016.

Engineers now have a long winter ahead of them to try to make sense of the data gathered at the test at Valencia and Jerez, or else send their test riders out in the chill of winter, as Aprilia intend to do at Jerez in a few weeks. Those engineers have an awful lot of work ahead of them.

The men and women at Ducati will be getting the most time off over the holiday period. It is clear from the first two tests that the Italian factory has hit the ground running with the new unified software, and have the systems working relatively well.

One Ducati engineer reckoned that they were already at about 50% of the potential of the software, far more than the 10% MotoGP’s Director of Technology Corrado Cecchinelli had estimated at Valencia.

The fact that Scott Redding topped the final day of testing at Jerez on the Pramac Ducati GP15, a couple of tenths faster than Marc Márquez and the only rider to crack into the 1’38s, is proof enough that Ducati have the situation under control. (For a full list of unofficial times, see below).

Redding has been impressive throughout the test, and was a very happy rider after Friday. “The good thing for me is that I feel comfortable on the bike,” Redding said.

Last year on the Honda, the RC213V did anything but talk to him. Whenever he tried to go faster, he would go slower. Now, on the GP15, he was fast, knew he could go faster if he pushed harder.

Redding was very happy, as were the Pramac team he is now riding for. Even more importantly, Ducati management were happy with Redding, Ducati’s MotoGP boss Davide Tardozzi singing Redding’s praises to journalists.

Redding’s teammate Danilo Petrucci was fast too: a quarter of a second off the pace of the Englishman, but just a few hundredths slower than Marc Márquez. Both Andrea Iannone and Andrea Dovizioso were nearly as fast after just one day of testing as Márquez was on his second day.

What have Ducati done so right? It looks like they are reaping the benefits of their work with Avintia and the Open class Ducatis in 2015. Ducati’s engineers have a solid understanding of how to use the unified software, at least, despite the major changes it has undergone for 2016.

The new software, and the interface used to control and manage it, is based on last year’s software, and so that experience is coming in handy.

The problem is the same at Aprilia, who were focused on their own effort this year, and completely ignored the ART bike being run by the IODA team of Giampiero Sacchi. Aprilia barely touched the unified software at Jerez, despite this being their second test in November.

That experience with last year’s software is beneficial could be an advantage for Yamaha too. Yamaha shirts were regularly seen in the Forward Racing garage, working with that team to get the best out of the Yamaha M1s being run by the team.

That knowledge will transfer into both the factory Movistar Yamaha team and Tech 3, and should allow them to get up to speed with the electronics more quickly in 2016.

With private testing limited to just five days for 2016, Yamaha elected not to test at Jerez, preferring to save their test days for the season next year. That is a luxury which Honda have already foregone.

With the electronics now more crude, engines are becoming more difficult to control. This, in turn, is benefiting Ducati, the Desmosedici having a more user-friendly nature, despite its massive horsepower. This had meant Ducati had fewer problems with the electronics, as Andrea Dovizioso explained.

“We didn’t have any big problem, but it’s different from what we use before,” the Italian said. “You have to ride very smoothly, especially in the middle of the corner when you have the maximum angle. There is less control than what we used before.”

This again should also benefit the Yamaha, once they take to the track.

It certainly didn’t help Honda. The aggressive nature of the RC213V and HRC’s lack of experience with the unified software saw Marc Márquez thrown violently from his bike early on Friday.

“The highside was really strange,” Márquez said. “Really strange, because it was not a corner that you open the gas more, you just keep the gas steady and in one point I lose the rear really quickly. This never happened to me in MotoGP, I never had this experience, but now I was more careful in this corner.”

The place where Márquez crashed was fast, Turn 3 or Doohan corner. “I went in with some gas. I was consistent with the gas, but in one moment I lose the rear wheel in a really aggressive way, and then I fly! Maybe we have to understand better these new electronics,” he said.

That crash happened with Honda’s new engine, which was an improvement, but was still aggressive and powerful. After three days of testing, both Dani Pedrosa and Marc Márquez felt the new engine had more potential, but it was still not completely where it needed to be.

They were both uncertain whether Honda had enough time to build a new engine ready for the Sepang test in early February, but there were still some avenues open for exploration.

Falling at the Front

Acceleration was where Honda was struggling in 2015, but they had been able to get it all back in braking. That could be a much tougher ask with the Michelin front tires.

“Looks like last year we lose in acceleration, we gain in the brake point. This year, still we are losing on the acceleration at the moment, and we cannot gain a lot on the brake point, because the Michelin tire is more in the limit, and is more difficult to find the limit.”

The front was not as strong as the Bridgestone had been. “In the last long run, in the last ten laps, I push and when you push all the laps on the brake point, you overheat the front and then it’s easy to lose the front. So we have to find a way to gain on the exit and acceleration,” Márquez said.

In that last long run, Márquez had suffered his second crash of the day. It had been entirely his own fault, he said. “We did the comparison with both engines and everything, and Honda asked for us to be on the limit to try to compare well, and the limit on the brake point with the Michelin is dangerous.”

The problem with the Michelin is that it is hard to feel exactly where the limit is, Andrea Dovizioso explained. Again, they had been helped by the fact that both the Avintia and Pramac teams had already been testing, and had provided the factory team with data.

That had helped improve the feeling with the front of the bike, but there was still room for improvement. “Overall, you have a good feeling when you ride, but you don’t understand everything that happens,” Dovizioso said.

That made it hard to manage the front tire over the course of a race, he said. “We have a lot of grip on the rear, we can be really fast, but it’s not easy to manage the front.” The transition between braking and off the brakes was the risky part.

“On braking, with braking, but also the critical point is when you touch the throttle. At maximum angle, when you unload the front, it’s easy to lose the front. That’s why it’s not easy to manage, and we have to understand if we can improve this feeling.”

It is no real surprise that Michelin tires should behave this way. When asked if the feeling was any different from Valencia, when they used different compounds, Dovizioso echoed the sentiments of Valentino Rossi, who had referred to the DNA of the Michelins being unchanged. “It doesn’t matter the compound, the rubber, this is the characteristic of the tire,” Dovizioso said.

There have been an awful lot of crashes on the Michelins, but this will start to diminish over time. The riders’ riding habits are still infused a Bridgestone attitude, but this will have to change.

The Bridgestone is big and stable, and that stability allows a rider to keep the front brake applied quite forcefully all the way to the apex.

The Michelins are much more sensitive, and need riders to do much more of their braking in a straight line, pitching into the corner with a lot less brake, and not upsetting the bike through the corner until the bike is in a position to start to use the tremendous grip of the rear Michelin.

Apply it too early, and with too much lean angle, and the rear can overpower the front and cause it to wash out. But be a little more patient, and you can exploit all that grip to get massive drive out of corners.

Lessons for the Future

What the Jerez test has confirmed is what seemed apparent at Valencia. Though the RC213V can be quick for one lap, the Hondas are in trouble. The Michelins allow a bike with great acceleration to get out of the corners very quickly, but the front is much more critical when it comes to braking.

That is diametrically opposite to what HRC’s current design philosophy needs, Honda riders able to exploit outstanding braking into corners, and having to find a way to manage the lack of acceleration.

More rear grip will definitely help the Hondas, but nowhere near as much as they will help the Ducatis and the Yamahas, bikes which already have fantastic drive out of corners.

The Jerez test also exposed two more of Honda’s handicaps. Firstly, the engine is still too aggressive, making it much more unsettled through corners, again making it more difficult to manage the limit of a twitchy front tire.

Secondly, the lack of experience and knowledge of the new unified software is making it harder for their engineers to calm the engine down using the electronics. HRC is full of incredibly smart people, but they need time to figure out how to get the best out of the bike.

This was also costing Pedrosa and Márquez track time during testing. They spent a long time sitting in the pits waiting for software changes to be made, as data engineers figured out how to make the adjustments to the electronics needed to achieve their intended bike behavior.

You have to wonder whether HRC is starting to regret not putting more time and effort into supporting the Open class Hondas in 2015. They could have started 2016 with an idea of where to find solutions to their problems with the software. At the moment, the impression they make is of a factory which is floundering.

Unofficial Times from Friday at the MotoGP Jerez Test::