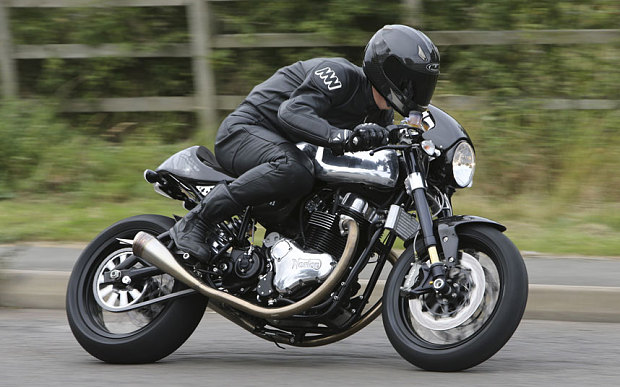 The low and loud Dominator SS is very much at home on winding roads Photo: PHIL MASTERS

Reclining on its side-stand with the Gothic splendour of Norton’s base at Donington Hall as a backdrop, the Dominator SS looks every bit the archetypal British café racer. Sun glints off a curvaceous, polished aluminium petrol tank. An aircooled, parallel-twin engine has Norton’s distinctive logo on its crankcase, and is held in a tubular steel frame whose curved rear section mimics that of the marque’s legendary Featherbed chassis.

This Dominator is not some lovingly restored relic from the early Sixties, when Norton’s Dominator 650SS, whose name and silver-painted tank it echoes, was among the fastest and finest bikes on the road. This Norton is brand new: assembled by hand at the small factory in the grounds of the Leicestershire manor. It’s the flagship of a marque that has overcome a troubled past to make recent headlines for the right reasons.

It’s now five years since Norton returned to production under the control of Stuart Garner, a youthful entrepreneur who’d made a fortune in fireworks before buying the ailing marque in 2008. His first model, the Commando 961, was a stylish retro roadster, conceived by an American engineer and Norton expert who had run out of money. Garner revamped the Commando prototype, brought it to market and has since been producing small but increasing numbers while expanding the business around it.

That progress was recognised in July, when Chancellor George Osborne visited Donington Hall – the former British Midland airline base that Garner bought in 2013 – to announce £4m of Government support. This will help fund the British Motorcycle Manufacturing Academy, based at the site, which will soon be training more than 90 apprentices. Garner has raised over £10m, which is also being used to develop a 1,200cc V4 engine that will power a new-generation superbike, due in 2017, and a related range of liquid-cooled 650cc twins.

It’s a far cry from the saga that had seen Norton – which built its first motorcycle in 1902, and won the inaugural Isle of Man TT race five years later – mired in a succession of failed revivals and legal battles. After much success in the Fifties and Sixties the firm struggled through the following decades. Its nadir came in the Nineties, when the promise of rotary-engined roadsters faded, replaced by a hopelessly optimistic 1,500cc V8 superbike, the Nemesis, which generated excited headlines without coming close to production. 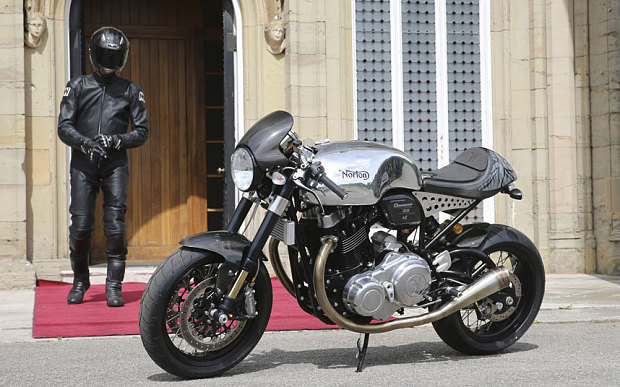 The Dominator SS is much more down-to-earth. Like the closely related Domiracer, a non-street-legal model of which just 50 units were built and quickly sold last year, it’s essentially a café racer version of the Commando 961. Its 961cc, parallel-twin engine is identical to the Commando’s, complete with old-style pushrod valve operation. The modest maximum output of 80bhp is unchanged, although the limited-edition SS comes with a free-breathing exhaust system that adds a few horsepower.

In fact “free-breathing” is a euphemism because at the press of its starter button the Dominator SS comes to life with a deep bark that turns to a deafening din with every twist of the throttle. Low “clip-on” handlebars and rearset footrests dictate a racy riding position. The carbon-fibre seat unit is thinly padded but gives enough legroom that I didn’t feel cramped despite being tall.

Donington Hall is surrounded by lanes on which the Dominator is very much at home. Its throttle response is excellent; the motor wonderfully flexible. A little parallel-twin vibration intrudes near the 8,000rpm redline but that’s not a problem because the Norton punches hard from low revs, changes sweetly through its five-speed gearbox (though first was sometimes hard to engage), and is hugely involving and fun with the hedgerows flashing past as it thunders towards a top speed of about 130mph.

Handling is excellent, as should be expected of any bike with a blend of Norton Featherbed frame and Öhlins suspension. Steering is light and accurate, and the forks and easily adjustable rear shock unit give a respectably compliant ride as well as good control. Brembo Monobloc front brake calipers provide fierce stopping power, albeit without ABS. Ground clearance might be an issue on the nearby Donington Park circuit but there’s ample for enthusiastic road use.

The authentic British bike experience was not enhanced when the rear light assembly vibrated loose. But the SS’s overall build quality is excellent, as it should be at £24,500. In fact the UK’s allotted 50 of the total of 200 units have sold out. But the standard model, which costs £19,950 and has conventional Commando-style tank and exhaust, is starting production.

In either form, the Dominator is a captivating blend of traditional café-racer style and modern performance, from a marque with an exciting future.

The R nineT has an upright riding position but its retro looks, punchy 110bhp twin-cylinder performance and fine handling give similar appeal to the Norton’s and have made it a big hit.

Like the Dominator, the Continental GT has café-racer style and an old English name but the 535cc, Indian-built single makes 29bhp so differs as widely in performance as it does in price.

With its café racer styling and 865cc, 69bhp parallel twin engine the Thruxton looks like a close rival, but it’s relatively soft and heavy so can’t approach the pricier Norton’s raw thrills.