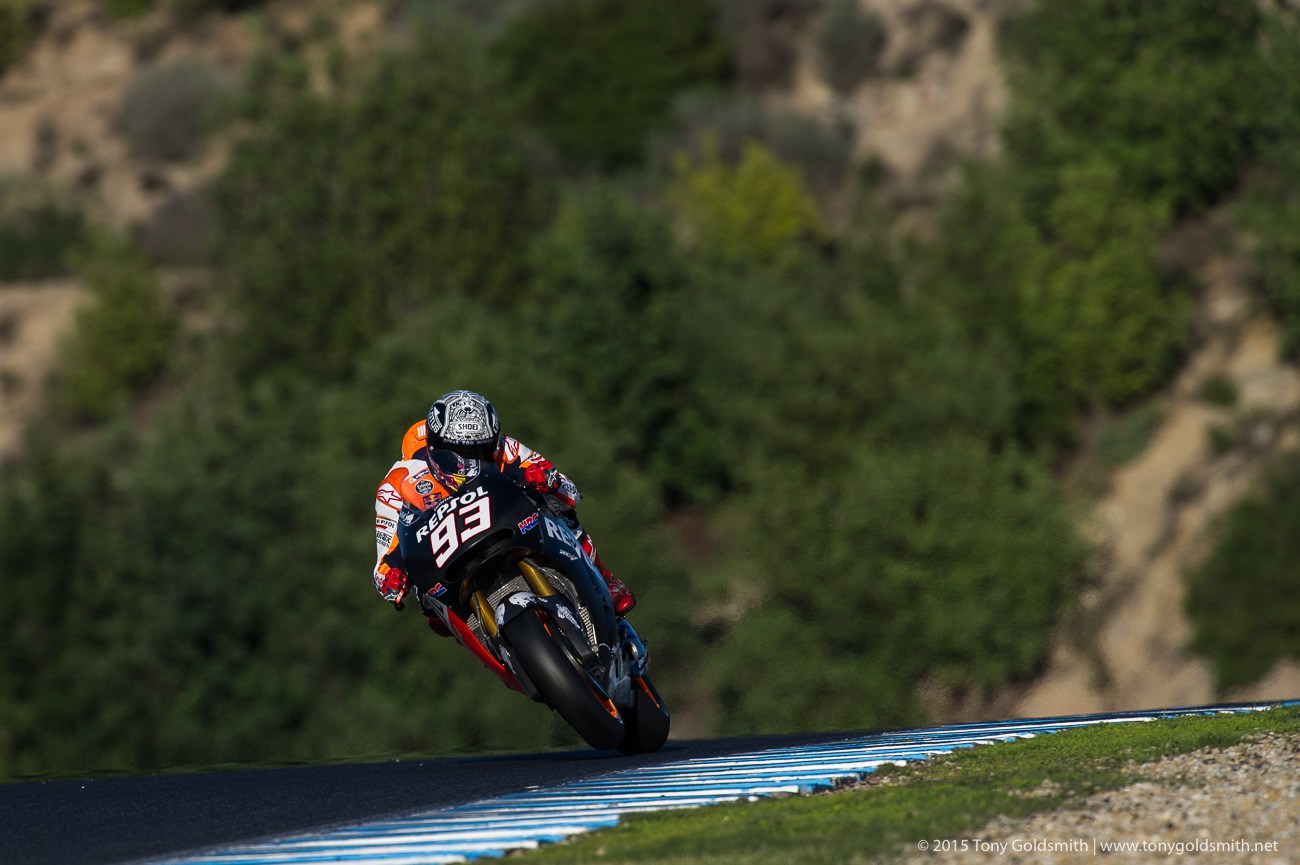 Have HRC made the same mistake again? In 2015, the Honda RC213V was a nasty beast to tame, suffering with an excessively aggressive engine.

The engine was probably the single most important reason Marc Márquez could not mount a realistic defense of his second title, forcing him to try to make up in braking what he was losing in acceleration, and crashing out as a result.

At the Valencia test, all eyes were on Honda’s new engine, to see if they had finally fixed the problem.

Valencia turned out to be a little too complex to make a real judgment. The switch to spec-electronics and Michelin tires introduced way too many variables to be able to filter out a single factor, Honda engineers taking a long time to extract some kind of consistency from the new unified software all MotoGP bikes must now use.

The 2016 RC213V engine seemed a little less aggressive, but the new software made it hard to tell. The current test at Jerez was supposed to give a clearer indication, with HRC’s engineers having a better handle on the unified software.

Though the verdict is not yet in, it is not looking good for the 2016 engine Honda brought for the tests in Spain. Both Dani Pedrosa and Marc Márquez have reported the engine as still being too aggressive, and difficult to manage, though the engine character has changed.

The key will be finding the right balance between the top and bottom end.

Less Would Definitely Be More

How that manifests itself is in overpowering the tire as it wears. “At the moment, with the tire is new, you can adjust,” Márquez said. “But the torque is quite aggressive in acceleration, the wheelie is coming too much, some laps more and some laps less. Not consistent, but we are working there to try to be more consistent in the exit of the corner with the gas, and this will be much better for the acceleration.”

Dani Pedrosa was unwilling to label the 2016 engine as aggressive, but was clear that Honda had to make the right choice based on the feedback from the two Repsol Honda riders, to ensure they don’t find themselves in the same boat as 2015, where they discovered they had a problem too late to change the engine design.

“I wouldn’t use this word [aggressive],” Pedrosa said. “But sure it’s a little bit more difficult. Because again, we don’t want to make the mistake, we are trying to make the correct choice for next year. And sometimes, when you have a new engine and the feeling comes right immediately, then the decision is more easy to take. But this time, the differences are a little bit less, so win and lose, win and lose. So we must take care for what we choose for next year, because at some point, we cannot change. We have to be really open now, and take the time.”

Power Is Nothing Without Control

How big a problem was the 2015 Honda engine? Scott Redding came off the Honda RC213V in 2015, and onto a bike that is even more powerful, the Ducati Desmosedici. The Honda’s problem was not horsepower, however, but the way it produced that power.

“Last year, on the Honda, I was going at 110%, and I couldn’t do anything, I was already at the limit.” The Ducati was a totally different ball game, Redding said.

“The Ducati is so easy compared to the Honda,” Redding said. “Even today, when we were trying to put the weight on the rear, and the other guys complained about wheelies, I was like, OK, this is still not really wheelie. OK, it’s coming closer, but it’s still not wheelie.”

The Ducati engine was a lot more user friendly. “I feel good, the power is really manageable off the bottom.” Redding said.

“It’s almost too lazy, we have some things to try tomorrow with engine management to make it a bit more aggressive for me, but it’s just so easy and predictable. Especially here. At Valencia, it was a bit more rough, but now, because it’s bit bigger circuit, everything is good. I can’t say anything negative, it’s more noisy, and things are happening and stuff, but actual throttle connection and feel is great.”

Both Repsol Honda men continued to work on setting up the spec-electronics, which is a very time-consuming affair. “Working on the new electronics is slow, takes a lot of time,” Márquez said.

He had only used the 2016 engine on Thursday, precisely because it took so long to find the right setting for the two different engines. “I see that with the 2015 engine and the 2016 engine, we need a completely different map. Because it’s a different character of engine.”

“Yes, it’s true, here it’s a little bit better. In Valencia it was everything, the wheelie, the traction control in the middle of the corner, but here everything was more smooth, and working together with the throttle. So a little bit more understanding when you are on the bike, and the bike is not making such big moments like we had in Valencia. But still, we have to go more deep, we need more experience for these controls.”

The electronics are more of an issue for the Honda than they are for the Ducati, perhaps a reflection of the fact that Ducati’s engine is more user friendly all round. “[The electronics] feel pretty good,” Scott Redding said.

“Even when the tire drops, my lap time drops maybe two tenths. But even with ten, fifteen laps on the tire, I can still do a half-decent lap time, where last year I would struggle. We haven’t even touched the electronics at all today, I was just riding the bike and working with feeling. And actually I feel we’ve got quite a good base with the electronics.”

With all the focus on engines and electronics, it is easy to forget that an issue remains with the Michelin front tires. Two heavy crashes again on Thursday saw Michele Pirro shaken up, and Eugene Laverty fracture his radius, both caused by the front washing out.

The problem appears to be caused by a slight lack of feel from the front tire. “The main thing is a little bit light feeling on the front in fast corners,” Scott Redding said.

Marc Márquez also identified faster corners as being a real problem. He had had a few moments in the fast corners, especially as got close to the limit of grip.

The issue is also down to the front tire not being as hard-wearing as the Bridgestone had been. The Bridgestone front was nearly as good on the last lap as it had been on the first, whereas the Michelin was quickly losing grip, Redding explained.

“It drops, not quick, but it drops like a rear tire, whereas the Bridgestone front, the last two or three laps of the race, maybe it will drop. But this one is definitely dropping more like a rear tire, consistently getting worse and worse.” At least the loss of grip was predictable, making it something a rider can manage.

The front is one area which Michelin is working hard to solve. Alvaro Bautista had been given three different front tires to test, one of which he particularly liked.

But, Bautista said, the problem of it being difficult to feel where the limit was remained. It meant changing styles to adapt, the factory Aprilia rider said. You have to brake as much as possible while upright, instead of trailing the front brake deep into the corner.

The MotoGP men have one more day to continue working. The factory Honda and Aprilia men, along with the satellite Ducati riders, will be joined by the factory Ducati riders. It will be a crucial final day of 2015, giving the engineers enough to work with over the winter.

Unofficial Times from Thursday at the MotoGP Jerez Test: