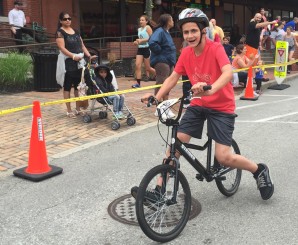 “Stability scores in all body planes were significantly improved during the five-week duration,” said Shim, who conducted the research at the Pier Center for Autism in Sioux City, Iowa. “Starting on a Strider Bike can assist children with special needs in transitioning to a regular, two-wheeled bicycle without the anxiety of falling or using training wheels.”

The five-week study involved eight children with ASD between the ages of six and 10 who had no prior bike-riding experience. They met three days per week for one hour and, on average, rode for about 15 minutes each time, based on their tolerances.

A MANOVA, a multivariate analysis of variance, was used to determine significant changes, if any, during the five-week period. Variables such as static balance with their eyes open, unstable surface with their eyes open, and stability in four body planes (front, back, left, right) were measured consistently during the five weeks. Scores were recorded on a computerized balance plate which determined Center of Pressure scores and Limit of Stability scores.

The research was sponsored by Strider Sports International, the leading manufacturer of no-pedal balance bikes, which has sold over one million Strider Bikes since 2007. The Strider Bike line-up includes the 12-inch model for riders from 18-months up to 5-years old, and the 16-inch and 20-inch models developed for older children and adults with balance and coordination challenges.

A full report of Shim’s 2015 findings is expected to be published in early 2016. Findings released last week show that ASD affects one out of every 45 children in the United States. Many people with ASD never learn to ride a two-wheeled bike because of challenges with balance and coordination.

Strider Sports created the Strider Rider Fund in 2014 to facilitate providing balance bikes to non-profit organizations serving individuals in need. One percent of Strider Sports’ gross revenue from worldwide sales each month is allocated to the Rider Fund, which is expected to exceed $300,000 this year. To learn more about the Rider Fund, visit striderbikes.com/special-needs-bikes. For more information about Strider, visit striderbikes.com.