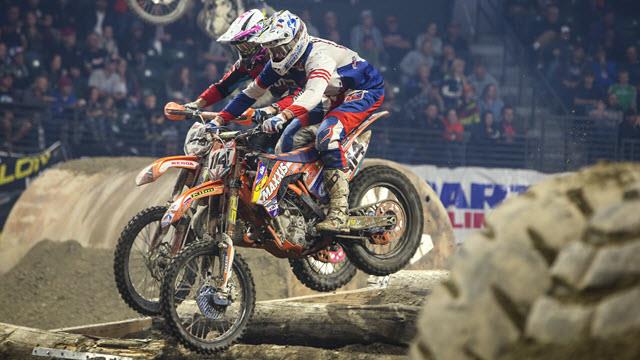 Nevada’s Ty Tremaine confirmed that he will compete in the 2016 FIM Superenduro Championship, which will kick off in Poland on December 5th. The FMF/RPM/Team Maxxis KTM rider won the 2015 Junior class championship after taking three wins in six events and will move up to the Prestige class for 2016.

Tremaine, who competed on a KTM 300 2-stroke during the 2015 Superenduro series switched to a 350 4-stroke for the GEICO AMA EnduroCross series, where he currently holds down seventh in the championship. For 2016, he plans to switch to a KTM 250XC-F 4-stroke and will ride that same bike at the GEICO EnduroCross finals in Ontario, California on November 21st.

Tremaine will now be facing off against Taddy Blazusiak, the defending Superenduro champion, Cody Webb, the defending AMA EnduroCross champion, Jonny Walker and David Knight among others. But the American feels ready for the challenge and has competed in the pro class in the AMA series for the past two seasons, where he has won the Junior class championship, which is a championship within a championship in the US series.

“Ty Tremaine will be the main focus for our team’s efforts in 2016 to contest in the Maxxis FIM SuperEnduro World Championship Series”, commented RPM Racing Team Owner, Mike Hurlbert. “Ty is very young, talented, skillful, hardworking and has the same long term goals as the team which it to win races, championships and enjoy the sport we love.”