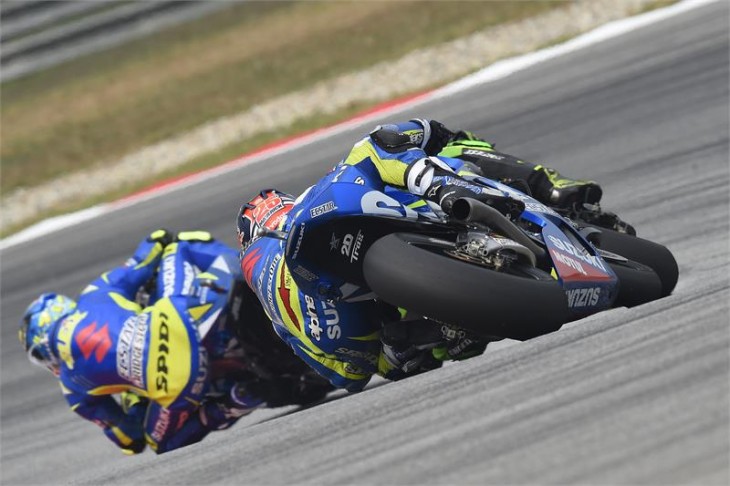 The last race of the 2015 MotoGP™ World Championship is about to take place at the Circuito de la Comunitat Valenciana and the enthusiasm of Team SUZUKI ECSTAR is buoyed by the fact that their rider Maverick Viñales is already winner of the Rookie of the Year title.

The young Spaniard leads the special classification with 92 points, making his first season in the Top Class a positive one. His path to the title came through consistency; although his performances in some races were not as good as he was expecting, his riding skills and efficiency on the Factory GSX-RR has constantly improved. The positive side of his performance is highlighted by the fact that he has always been inside the top 15 and well into the points in 15 GPs out of the 17 raced so far.

On Sunday evening he will be crowned Rookie of the Year at the annual FIM MotoGP Awards Ceremony 2015.

The Valencia GP is also looked forward to by Aleix Espargaro, who is getting back to Spain after the Far Eastern rounds with the desire to finish his first season with Team SUZUKI ECSTAR in a positive way; and he is looking forward to test the new set-up that will mark the beginning of the 2016 season.

The Circuito de la Comunitat Valenciana is a facility completed in 1999 and since then has been hosting the GP de la Comunitat Valenciana. The track is pretty tight, but the complex can hold around 150,000 fans in the stadium style grandstands. Being the last GP of the season it will see many people coming to support their heroes. The MotoGP™ events are held on a 4km track comprising five right-handed corners, eight left-handers and a 650m straight, for a total distance of 120.2 km (74.7 miles) covered in 30 laps.

“The last races marked a positive improvement in the finalisation of the set-up of my machine and my feeling has got better and better since the difficulties I had after the mid-part of the season, but the results we had didn’t satisfy me completely. I feel that we are working hard and positively but we still miss something. The Valencia round will be the last one of the season and I definitely want to get a positive result, to pay back the efforts that me and my crew and the Factory put in this project. My expectations were to end the Championship in the top 10, but unfortunately I’m in 11th place right now but we have the 100-points target very close and I’m only six points away from the top 10, therefore there is still room for a positive end of the season. After the race we will start testing for 2016, it will be very interesting to see how we will manage the new tyres and new electronics, even though I want to take it step by step; first the race and then we think about the test.”

“For sure I’m happy for having taken the Rookie of the Year title, even if it wasn’t my priority it is a good feeling. My objective for this year was not to focus on the classification but to learn as much as possible with the new class and the new machine; also being a Factory rider in a fully organised Factory team. This has been an amazing experience, I could learn a lot and I feel I still have much to gain, this keeping my ambition always high. The race in Valencia will be important as all the others, we are very close to the 100-points target and not so far from the top 10 in the Championship; it will be hard but it would be a good result after the positive season. I like the circuit, it could also be good for our machine’s layout and the fight will be very interesting. We have developed a way to approach the race that makes me feel comfortable, I like to work hard to prepare for the race and this is basically what we are going to do.”