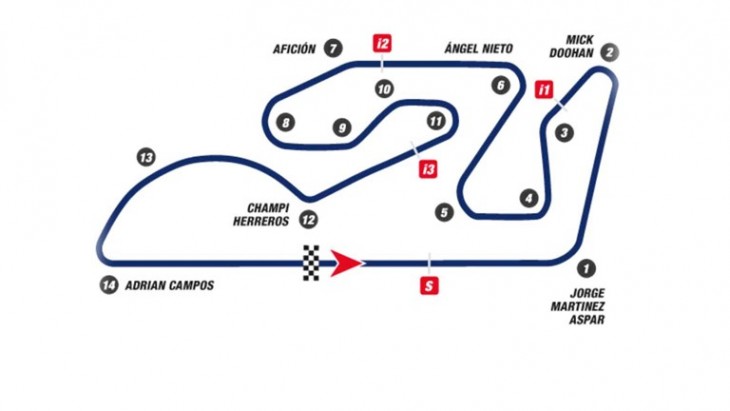 Movistar Yamaha MotoGP’s Valentino Rossi and Jorge Lorenzo prepare to go head-to-head during the final round of the 2015 MotoGP season at Circuit de la Comunitat Valenciana – Ricardo Tormo this weekend where the championship will be decided.

Movistar Yamaha MotoGP have made their way back to Europe to wrap up the 2015 MotoGP season in Spain this weekend at the Gran Premio de la Comunitat Valenciana.

With just seven points separating Valentino Rossi and Jorge Lorenzo in their battle for the championship title, the riders are shaping up for a fierce battle on Sunday.

After three intense race weekends overseas Valentino Rossi arrives in Spain with a chance to win his tenth World Championship Title, which would be his eighth in the premier class. Though Valencia is admittedly not his favourite stop on the MotoGP calendar, he has enjoyed his fair share of success there and hopes to add another top result to his tally. In previous years he secured two premier class wins in 2003 and 2004, three second places in 2002, 2009 and 2014, and three third places in 2005, 2008, and 2010.

Teammate Lorenzo rode three very strong races during the fly-away rounds and arrives at his fourth and final home Grand Prix of the season ready for battle. He looks forward to delighting his fans with another podium place this weekend and hopes to celebrate with them his fifth World Championship title victory, his third in the MotoGP class. So far Lorenzo has claimed two premier class victories at this circuit in 2010 and 2013 and a third place podium position in 2009.

The 4.0 km Ricardo Tormo circuit was completed in 1999 and has a unique atmosphere since the round of Valencia became the traditional closing stage of the MotoGP calendar in 2002. The circuit is known to draw record crowds and it will be even more popular this year as the 2015 championship will be decided in the final race of the season, making it a must-be-at event. The layout of the circuit permits fans a perfect view of all parts of the track from every stand, so they won’t miss any of the final racing action.

“It will be a very intense weekend and also a very important one. I want to think just about what will happen at the track. My goal is to work at my best capabilities with my team and make the most of every session to get to the race on Sunday with everything I need to express myself in the best way possible. I’m still waiting to hear the decision of the CAS, but I hope I can do a normal GP to battle and fight for the title on equal terms with Jorge. In Valencia there will be so many fans and I’m glad for that. I’ll try to do my best on the track.”

“We have arrived in Valencia after a very busy and exciting season. In Malaysia we got a good result and we recovered more points in the championship, but I will skip past all that happened there and stay focused in Cheste, where there is a lot at stake. I hope the fans will support us at home and that we will have a good race. This year I won the previous three races that were held in Spain and to do well in Valencia would be amazing. I’ve always noticed the warmth of the fans and I’m sure in Valencia we will enjoy a great show. I will give everything on the track to get this championship title.”

“The end of the season is rapidly approaching as we head to Valencia for the final race. This weekend will be a very important one for Yamaha as we will officially claim the ‘Triple Crown’. I’m sure the fans are just as curious as we are about which of our riders will win the rider title. Both Vale and Jorge are in top shape and we are sure they will put in their maximum effort as they always do. Throughout the entire season the team and riders have done a great job and we are motivated to work hard this weekend to give it our all in the last race. We aim to hit the ground running in the first session on Friday, so our riders have the means to close the season in the best way possible.”

Monster Yamaha Tech3 Team riders Bradley Smith and Pol Espargaro will arrive at the Ricardo Tormo circuit prepared and ready for the Gran Premio Motul de la Comunitat Valenciana where they aim to close the year with two strong results. After a demanding triple flyaway header, the MotoGP paddock returns to Spain for what promises to be a thrilling end to the 2015 racing season with the 4 kilometre circuit being an incredible stage for the action. The track, which features eight left as well as five right corners, is situated in an amphitheatre that allows the roaring crowd to view every section of the circuit where many memorable battles have been fought in previous years.

Bradley Smith heads to Spain fully primed for the fight as he targets another top six result in order to confirm his status as the leading satellite rider of 2015 as well as 6th in the World Championship standings. The young Briton comes off the back of a superbly executed 4th place finish in Malaysia and as he has positive memories of a previous victory at the Valencia circuit, he confidently seeks to close the year on a high. Meanwhile, Pol Espargaro aims to give his all and fight to a solid finish in his home country, despite still being in pain due to the injury he sustained at the previous round. The young Spaniard unfortunately hurt himself during the warm up at the Malaysian GP and suffered a cervical fissure and sprain. Yet, he brilliantly powered through the pain and persevered to 9th. He will be intending to make amends this weekend, despite not being fully healed, and he hopes to repeat his performance from last year, where he completed the race in 6th and as the leading satellite rider.

“Next up is the season finale and I can’t wait to get going at Valencia where I fully intend to close this incredible year with a good result. My main objective is to complete the 30 lap sprint inside the top six so that I can clinch 6th in the championship standings and finish as the leading satellite rider. This will be super for me and the Tech3 Team and a testament to how hard we’ve all worked in 2015. I’ve had some strong performances at Valencia, which includes winning my last 125cc race, plus after achieving three decent results in the fly away GP’s, I am fully confident of doing a good job this weekend. The event is bound to be a memorable one and we definitely need to hit the ground running on Friday. The layout of the track doesn’t provide too many chances to overtake, so a solid qualifying performance will be crucial in order to be in a promising position for Sunday. Having said that, the weather there is always unpredictable and so we need to be ready for any circumstance. As far as I know the event is sold out and the grandstands will be packed, which will be great to see, therefore I am really looking forward to the last challenge of the year.”

“I am looking forward to racing in front of my home fans at the Ricardo Tormo circuit, which is a track that I really enjoy riding on and one that always has an amazing atmosphere. However, I am under no illusions that this round will be easy, especially because I am nursing the neck injury from the Malaysia GP. I am still in pain and to be honest, that race was one of the toughest that I have ever had to ride. It marked a tricky end to the flyaway events, which were all quite challenging and for sure, I would have liked to finish those three races further up the order. However, we never gave up and pushed nonstop so now we will focus on Valencia and I am confident of riding to a solid result. Last year, I completed the GP in sixth, which was a positive way to end the season and even though this may be a bit tricky to repeat due to the competition as well as my injury, it is what I will be hoping for. Having said that, the fans support will really help me and motivate me even more. There will be thousands there and I will do my best to give them a good result to remember the race by. I know that we can conclude the year positively and I will fight through the pain and do my absolute best at Valencia with my Yamaha YZR-M1.”

After seventeen races, the Circuit Ricardo Tormo in Valencia will host the 2015 season Grand Final. Loris Baz and Toni Elias will go hunting for the Open Class title.

Baz, MotoGP rookie, is just five points off the lead of the Open class and will race to claim the Open class title. Elias is also confident to repeat himself on the Spanish track after the points gained at Sepang.

“I’m going to Valencia motivated to do well. The Open Championship is still open, I have to recover five points in just one race, it will be difficult but I will do my best to say goodbye to the team in the best way possible.”

“After the points gained at Sepang obviously the goal is to repeat ourselves. It will be difficult, but I finally managed to find a good feeling with the Yamaha Forward. In Valencia I’ll do everything to hit the Top15 again in order to thank the team for this great opportunity.”