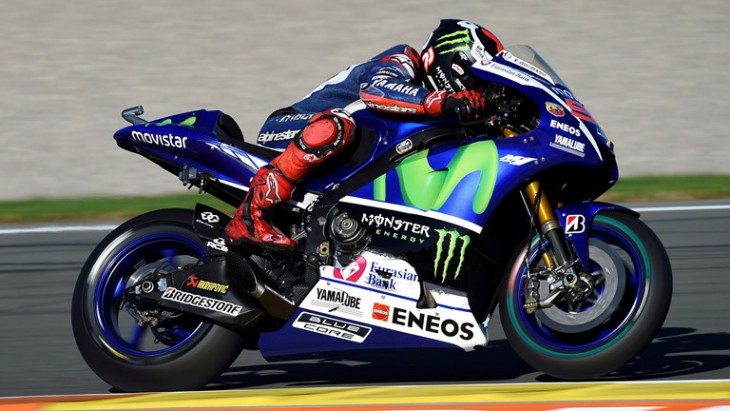 Movistar Yamaha MotoGP riders Jorge Lorenzo and Valentino Rossi came out of the starting blocks strongly during the first practice sessions in Valencia ahead of this Sunday’s championship showdown.

Lorenzo made a great start this morning and set multiple fastest laps in the Spanish sunshine. Happy to be riding in front of his home fans, he worked hard as the times dropped and posted a 1’31.434s just past the midway stage and led until the final minutes, before settling for second place just 0.184s from the front.

The Spaniard kept his form in the baking afternoon session that followed. He had a solid start, scoring fifth place on his first lap, and then steadily improved his lap times to move up the order into the top three. Despite the hot conditions he set a best time of 1’31.111s to claim provisional first place and continued to push out low 1’31s as he completed the day at the top of the combined free practice times.

Teammate Valentino Rossi also needed little time to get back into the swing of things for the final European round of the season. He was looking competitive while he spent the first half an hour of FP1 trying to find the perfect set up, before dropping under the 1’32s mark with a 1’31.665s lap. He wrapped the session up in fifth position, 0,415s behind the leader.

The nine-time World Champion also wasted no time in the afternoon and immediately took provisional second place on his first lap to take over the top spot with a 1’31.851s on the very next try. He continued to better his time as he and Marquez battled it out for provisional first. Throughout the session he worked through a couple of set up changes and ultimately set a fastest lap of 1’31.475s for fourth and secured fifth position in the combined session times, 0,364s behind his teammate.

“The day started positively and we improved the bike a lot in the afternoon. The bike is working really well and I feel strong, with good concentration. I’m riding well, but the bike, to be honest, is working very well for me to keep a high pace, even with old tyres, so I’m very happy about the beginning of the weekend.”

“When I’m riding I’m more relaxed and I’m quite happy about these two first practices, because already this morning my pace was not so bad and I was also quite competitive with the used tyre, which is very important for the race. I’m also happy that in the afternoon we tried something different that made me increase my rhythm and improve my lap times. I used the hard tyres and it wasn’t so bad and after I tried the soft to make a comparison and make the right choice for Sunday. It’s true that we have to decide our strategy now, because I think it will be difficult to use the 15 minutes of qualifying like a free practice, so I think maybe I can do the normal procedure anyway.”

“We’ve made a good start; both our riders are looking strong, so we can be content with the performance we delivered today. Jorge and Vale are also quite satisfied. Jorge showed a good speed and pace and added another step in the afternoon when he rode a stint of low 1’31s. Vale also looked competitive since the beginning of the first free practice and made a good progress in the afternoon with a best lap of 1’31.475s. We will continue to put in our maximum effort to smooth out the areas of the bike where there is some room for further improvement.”

Monster Yamaha Tech3 Team rider Pol Espargaro concluded the first day of action at the season finale in a positive manner by finishing in 8th position overall. The young Spaniard kicked off the Gran Premio Motul de la Comunitat Valenciana event at the 4.0 kilometre Ricardo Tormo Circuit with a strong run to 6th in the morning shake down session. When the practice started, he got onto his Yamaha YZR-M1 as he began making the initial alterations to the setup of his bike for the highly anticipated race on Sunday, despite still suffering with his neck injury. After completing a total of 20 laps, his best time of 1’31.892 left him only three tenths back from third and confident of a strong performance later in the day. Espargaro’s solid run continued when the second free practice session got underway and he carried on undertaking the setup changes with his Monster Yamaha Tech3 Team. By the time the chequered flag fell, the 2014 rookie of the year had powered to a quick time of 1’31.647 which saw him just half a second from the top of the field. The Spaniard now focuses on the all important qualifying practice tomorrow, where he will intend to clinch a competitive grid position for final race meeting of 2015, in front of his passionate home crowd.

Meanwhile, Bradley Smith endured a challenging opening day, at the last round of the 2015 MotoGP World Championship, which he concluded in 15th overall despite a thorough effort. The 24 year old began proceedings by launching into the setup work for his Yamaha YZR-M1 to suit the Ricardo Tormo circuit. He plugged away throughout the practice as the sun shone brightly overhead and completed a total of 21 laps before finishing the first session of track action in 17th. In free practice 2, the English rider pushed onwards as he sought to set himself up for the season finale on Sunday and focused on creating a strong setup which meant that he completed over a full race distance on the same rear tyre. Nevertheless, on his penultimate lap out of 22, Smith rode a 1’32.508 which put him in 15th position in the session as well as overall. However, he remains fully confident of battling to a solid grid position tomorrow and then completing his third season in the premier class in the top satellite position in the world championship standings.

“It has been a very positive first day and I am pleased because it has been quite a long time since we had such a strong start to the weekend. I was able to ride my time fairly easily and the tyres are working really well here, especially the rear which has a lot of grip. This is certainly also thanks to the high grip level of this circuit, which I like riding at and that I know very well. Therefore, I enjoyed being on my Yamaha today and to see the lap times being strong straight away is a really good feeling after this tough season. Now we will see how the weekend unfolds with the changing grip levels and the weather conditions, but we will do our best and try to continue this positive momentum until Sunday’s race.”

“Today was not great in terms of the end result, but I am fully confident that we can progress more tomorrow and get back to where we should be. Throughout the day, we improved gradually and made some small steps forward but we wanted to be as ready for possible for the GP and so we did a lot of laps on the rear tyre in order to get a good race setup. Anyway, we started to find a good direction in FP2 and I am sure that we will be much more competitive with new tyres when we get going again tomorrow. The main area where we have to improve is sector four which is the part of the track that I am struggling with and which also prevented me from setting a stronger lap time. Yet, I’m convinced that the team will work hard tonight and we will surely be back inside the top ten tomorrow morning.”

It was an intense working day for the riders of the Forward Racing team who will be competing in the last round of the 2015 season at the Valencia Circuit. Loris Baz and Toni Elias spent the whole day improving the set-up of their bikes and they closed the practice sessions in 18th and 24th place respectively in the combined standings.

Baz, still fighting for the Open title, posted a positive 1’32.597 on the Spanish track which earned him the third place in the category at just over half a second behind the leader Barbera. The Frenchman focused on finding the right setting for his Yamaha Forward, and is convinced he can do well in qualifying, where the goal is to get the Open Pole.

It was also a good day for Toni Elias, 24th in the standings with a personal best of 1’33.411. Back on track after the points at Sepang, the Spaniard has found a positive feeling and a good pace. He is confident for the race on Sunday.

“I am pleased with what has been done today: it was a good day of work. The overall feeling is positive and I lapped for most of the session with worn tires. In the end, I used fresh tyres to improve my lap-time and I’m confident for tomorrow’s qualifying.”

“It was a very positive Friday’s practice. I think I can still lower my lap-time, but I’m satisfied with the work done. I already have some clear ideas for the race and I am confident for it. The pace is good and the feeling is positive even with worn tyres. The goal for qualifying is to close the gap with the other Open bikes.”