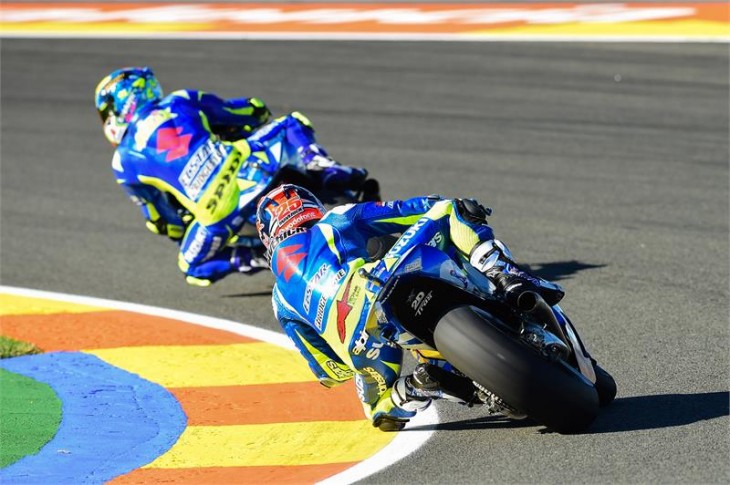 The final MotoGP™ round of the year at Ricardo Tormo circuit in Cheste, near Valencia will be very emotional for the two Team SUZUKI ECSTAR riders as it is the final round of their first year with the newly-returned Suzuki factory in MotoGP™ and it is also on home-soil for both the Spaniards and not far from their home cities.

Today’s first free practice sessions saw Aleix Espargarò and Maverick Viñales confident with the circuit, having at their disposal information from last year’s race, which was the very first appearance of the newly-born Team SUZUKI. Since then, the conditions have changed and the two Factory GSX-RRs are much improved. Due to this, the riders felt these early laps around Valencia were the closure of a first chapter in this new story.

Espargarò found a good feeling with the circuit quickly, starting to lap in the top-10 from the very beginning. In the morning session, a lack of confidence with the front gave him some trouble, but in the afternoon some changes in the set-up gave him better feeling. His best lap of 1’31.678 gives him the provisional ninth place in the combined classification.

Viñales also had some troubles with the front this morning, meaning that the improvements done with the GSX-RR throughout the season have been important, as the feeling with the bike is different since previous testing here. He improved his performance in the afternoon after the needed changes in set-up were made. His job focused on the finalisation of the race set-up, which still leaves room for improvement. His best lap of 1’31.986 sets him in provisional 11th place.

“A positive first day, both our riders could make some improvements and our work is proceeding well. Both of them had some troubles this morning in finding a proper feeling, but then in the afternoon things went much better. Aleix in particular was fast in both the single lap and in the long runs, his feeling with the soft tyre is already good and the race-pace is giving important feedback. Maverick in the early session had a minor crash so we had to change his plans, it took some time for him to finalise the electronics settings, but in the afternoon the changes in set-up and the configuration gave positive improvements. Both riders had positive feedback after the sessions and this leaves us positive for tomorrow.”

“It’s been a positive day, it’s good to start from a base and improve from there. This morning I struggled a little with the feeling at the front: I didn’t feel I could make the GSX-RR turn as I wanted, but in the afternoon things definitely went better. We are trying many different set-ups and the path we are on is pretty positive. With the softer tyre I had already a good fast lap and with a used tyre also the pace is consistently fast. I’m very confident with the soft tyre, usually the first attempt with the soft is pretty cautious but here I could immediately find a good feeling and be fast straight away.”

“This morning I went out to the track with too much enthusiasm and unfortunately I had a minor crash on the very first lap; my brakes were not at the right temperature and in turn 8 I went into the gravel. This changed our program for the day, we had to recover and to do everything quicker, but finally we made good improvements. This morning I struggled a little with the electronics and the traction, but in the afternoon the feeling was definitely better. With a new set of tyres I could lap very fast, improving a lot the lap times I did last year in testing. Since we lost some time today, I have the feeling that we still have room for improvement; tomorrow we will try to be more consistent and cut some more tenths. The electronics can be improved I think, as well as the set-up and my lines. I’m confident that we can improve a lot.”