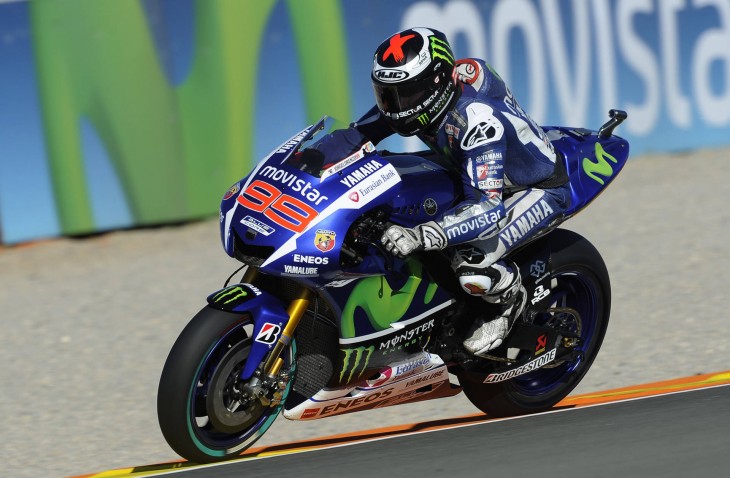 With teammate Valentino Rossi’s appeal to CAS still looming in the background, perhaps Jorge Lorenzo feels his safest bet is to win the race tomorrow … regardless of where Rossi finishes. Lorenzo increased his chances of doing exactly that today by breaking the lap record on the way to taking pole position for tomorrow’s race.  Lorenzo’s lap was so quick it put roughly 1/2 a second between himself and the next two qualifiers, the Repsol Honda duo of Marc Marquez and Dani Pedrosa.

Valentino Rossi, despite his FIM punishment placing him last on tomorrow’s grid, participated in qualifying and pushed hard (we think we know why – see below). Rossi found the gravel outside of Turn 8 when he lost the front during his fast lap, however, and ultimately recorded the slowest lap time in Q2. Rossi was unhurt.

As we reported earlier, Rossi was denied his request for a stay by CAS, but his appeal of the punishment levied by the FIM goes forward. Rossi likely thinks that, should his appeal be successful, he could be awarded points for this race based on his qualifying position rather than his finishing position. This could explain his effort to qualify, as normal, during this race. Here are the Q2 results from Valencia earlier today: