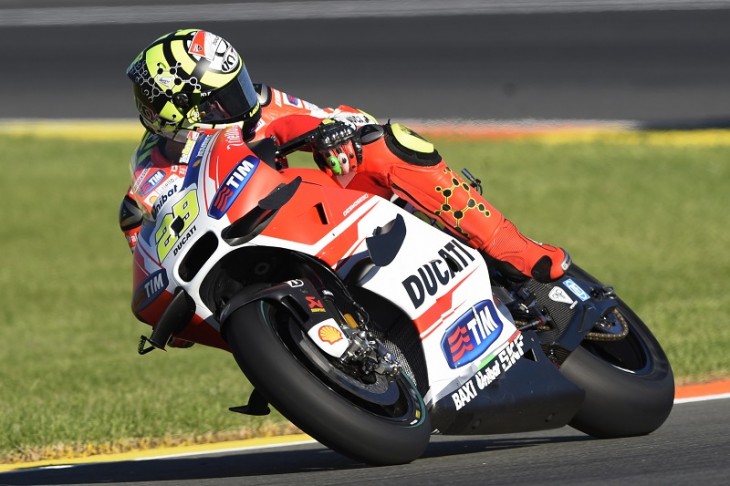 In the morning Dovizioso ended FP1 in fourth place, after setting his best time on a soft rear slick, while his team-mate Iannone preferred to use a medium rear throughout the session, ending up with seventh quickest time.

In the afternoon’s FP2 run, Iannone and Dovizioso both fitted soft rear tyres towards the end of the session, finishing respectively in third and fourteenth, but on combined times they ended the day fourth and seventh.

Michele Pirro took to the track at Valencia for his third race in 2015 as wild-card rider. The Italian tested some new detail parts and solutions on the Desmosedici GP15 of the Ducati Test Team and finished the first day of practice in thirteenth place.

“In the end it was a good day, but to be honest I expected to struggle less and be a bit closer to the leaders. In any case I am quite satisfied because the weekend has just begun and we managed to improve from this morning by only making a few small modifications, which were very beneficial. We got closer to the front and so we will continue in this direction to gain some more tenths, in order to be ready for Sunday.”

“It was a very difficult afternoon in that there was not much grip on the track and it was very difficult to control the bike. I was not able to do even one clean lap, because I made several mistakes which were caused by lack of grip. The rear tyre also showed an odd pressure drop so we now have to try and understand the reason why. In any case we must improve my feeling with the bike for tomorrow and so we’ll be working in that direction.”

“It wasn’t an easy day, because I still haven’t found a good feeling with the bike and I wasn’t able to be as fast as I would have liked. We worked on both bikes, testing some new detail parts and now we have to analyze the results to see what we need tomorrow in order to improve our times. My goal is to get inside the top ten and directly into Q2: my bike is going strong and so it’s only a question of feeling, but tomorrow I’m sure we’ll manage to find it.”