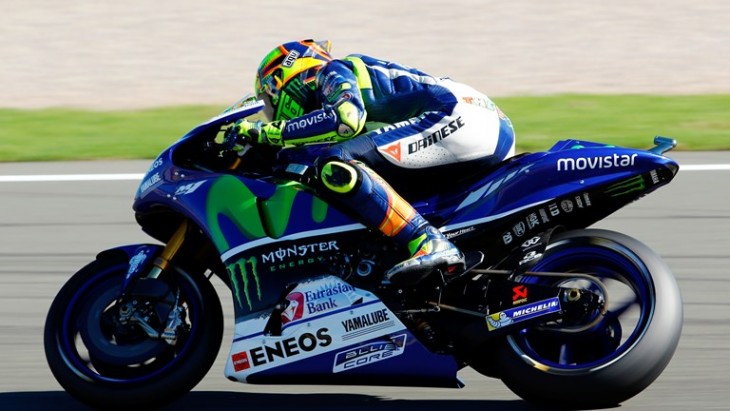 Movistar Yamaha MotoGP riders Jorge Lorenzo and Valentino Rossi were back in action today at Circuit de la Comunitat Valenciana – Ricardo Tormo to get underway with the 2016 preparations and test the Michelin tyres, wrapping the day up in fifth and twelfth place respectively.

The Movistar Yamaha MotoGP team made full use of the first day of pre-season testing in Valencia to get to know the Michelin tyres better. Lorenzo and Rossi both went out on 2015 YZR-M1 first so the data derived from this year’s bike could be used as a point of reference for when they switched to the 2016 machine later on.

Newly crowned triple MotoGP World Champion Lorenzo was the first of the Movistar Yamaha MotoGP team-mates to enter the track nearly two hours into the session and focused on balancing the bike. Without the pressure to do a time attack, he gradually picked up the pace over a total of 41 laps. His best time of the day was a 1’31.767s for fifth place, 0.216s off the front.

Rossi appeared on the scene not long after Lorenzo and followed the same approach to the session as his team-mate. After getting a feel for the new tyres on the 2015 bike, he moved on to the new edition. His pace steadily quickened towards the end of the day and after completing 57 laps in total, his best efforts of a 1’32.401s put him in twelfth place in today’s testing results, 0.850s from the front.

“It is fantastic to ride around as the World Champion. It’s an unbelievable feeling, I couldn’t be happier. The situation during the whole championship and especially the last race couldn’t have been more emotional, but I still have to test the Michelin tyres and I can’t relax and enjoy it completely because I need the tension to not make a mistake and crash. We started the test with completely the same bike as the race, just with the Michelin tyres. At the beginning it was difficult to get good lap times, but by changing the setting of the bike little by little, we improved the feeling of the front quite a bit. We didn’t solve the problem completely. I now have a feeling that I think everybody has; at the entry of the corner we lose a bit of stability and also when reaching the maximum lean with throttle the front can close suddenly if you push so much. It’s the opposite for the rear tyre, it’s fantastic! It’s unbelievably grippy and it gives you a very good feeling. We need to work a bit more on the front.”

“It’s a big change and it will be interesting, especially the tyre will make a big difference for next year. A lot changed, especially the setting, the weight distribution of the bike and everything. It looks like our competitors are a little ahead, because they’ve made more kilometres with the Michelin, but it’s just the first day. I also tried the new electronics and also that, as I expected, was quite a big step because it’s like going a little bit into the past. However, that too could be interesting and it’s only the first day, we have a lot to work on. The rear tyre is very similar and Michelin is good, it has very good grip. The front is the big difference. We need to understand how much weight this tyre needs to turn at the maximum. We need some more time.”

“The 2015 season has barely ended, but today we already started our preparations for next year. The riders spent most of the time on the 2015 bikes, adjusting the setting to the Michelin tyres and getting a first impression. So far our riders are quite satisfied with the rear tyre that provides good grip. There is still some work to do to improve the feeling with the front. It was very important to let the riders do a few laps with the 2016 prototype bike before the end of the day. Tomorrow we will continue work where we left off.”

2016 season preparation kicks off for Espargaro and Smith

Monster Yamaha Tech3 Team rider Pol Espargaro launched into his testing programme today during the first day of track action after the Valencia GP as the 2016 season preparations got underway. The young Spanish rider focused on sampling the new Michelin tyres and then set about exploring setup options on his MotoGP bike. At the close of the day, his best time was just under three-tenths from third and left him in 7th as he now confidently looks forward to riding his updated 2015 Yamaha YZR-M1 for the first time tomorrow in the final day of track action this year.

Meanwhile, Bradley Smith continued the positive momentum from his impressive 2015 season where he finished 6th in the standings as he started to get to grips with the new Michelin tyres. Similarly to this teammate, the Briton took steps forward in modifying the base setup of his Yamaha YZR-M1 to suit the French tyre manufacturer. The 24 year old rider’s best time was just 0.060 back from his teammate and left him in 8th. He now aims to make further advances tomorrow after a tireless effort today.

“All in all it has been quite a positive first day as the lap times of the whole field were competitive compared to this weekend’s times. Yet, there were a lot of crashes as we are all trying to adapt and we can’t expect everything to be perfect as soon as we start. However, I’m happy that we have another day of testing as we need to progress and try more options so that I will have a better feeling before we head into the winter break. I know that Michelin are working hard to improve the front tyre, which is the main issue at the moment, but I must also say that the rear compound is already really good. We have my new bike for 2016, which is the Factory Yamaha’s bike from this season that I will finally ride tomorrow and therefore, I’m fired up to close the test in a positive manner.”

“Day one has been completed here in Valencia and I feel that we had a really productive time. It goes without saying that for everyone today, the circumstances were new as we were all using Michelin tyres. Yet, from the information that we already had from Malaysia and Aragon, we were in a better situation to start from. I began this morning with this year’s bike and we worked to find a base setting in order to try and explore the potential of the tyres as much as possible. For my final run, we sampled my 2016 bike which we will really start to work with tomorrow in order to understand it’s capabilities as five laps was just a small appetiser of what is to come. It’s very early stages but we can already see that we have a bike for next year with more potential as I ran similar lap times on both versions. I am confident in saying that we are heading in the right direction and we have a clear development plan that we want to continue to test. So, I am happy with the work from myself and also from the team and I look forward to getting back on track tomorrow.”