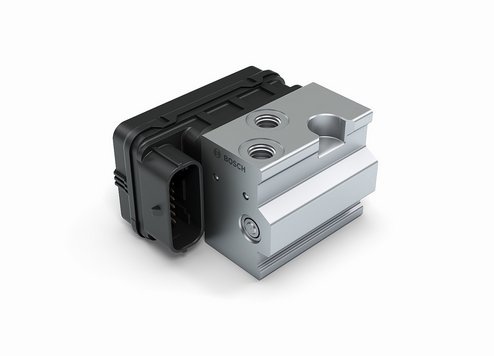 The leading manufacturer of ABS equipment for motorcycles, Bosch, has unveiled their smallest, lightest and most effective unit yet as they suggest that mandating ABS is coming closer to reality.

The new Bosch ABS10 motorcycle unit is up to 30% lighter and 45% smaller than the current ABS9 unit.

Bosch board of management member Dirk Hoheisel says it is a cost-effective solution for the price-sensitive small motorcycle segment as legislators around the world move closer to making ABS mandatory.

More than one in three new motorcycles manufactured in Europe is now fitted with ABS and Japan, Europe, India, Brazil and Taiwan have already mandated anti-lock brakes on designated motorcycles from as early as 2016. 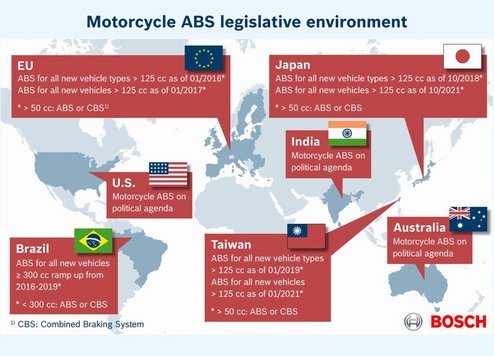 Mandatory fitment of the safety technology on motorcycles is also on the political agenda in Australia and America.

“We welcome the decisions around the world to make ABS standard. This will greatly reduce the number of motorcycle accidents.”

Bosch presented its new generation of motorcycle antilock braking systems at the EICMA motorcycle show in Milan last week, claiming they were not only smaller, lighter and cheaper to make, but also more effective with shorter stopping distances and more complex algorithms to cope with varying terrain and riding conditions. 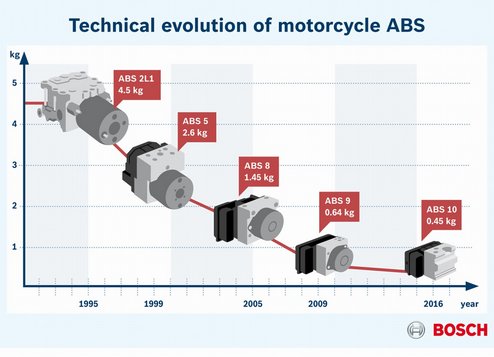 They will be available in 2016 and have been designed to suit small-capacity bikes in emerging markets such as India and Indonesia.

“We are bringing our ABS technology to all vehicle classes and markets,” Dirk says.

From 2017, new motorcycles and scooters with more than 125cc displacement throughout the EU must be fitted with an antilock braking system. In Japan, it will be mandatory from October 2018 for new type approvals for motorcycles with more than 125cc. In emerging markets such as Brazil, india and Taiwan, too, laws mandating ABS in the future have already been passed.