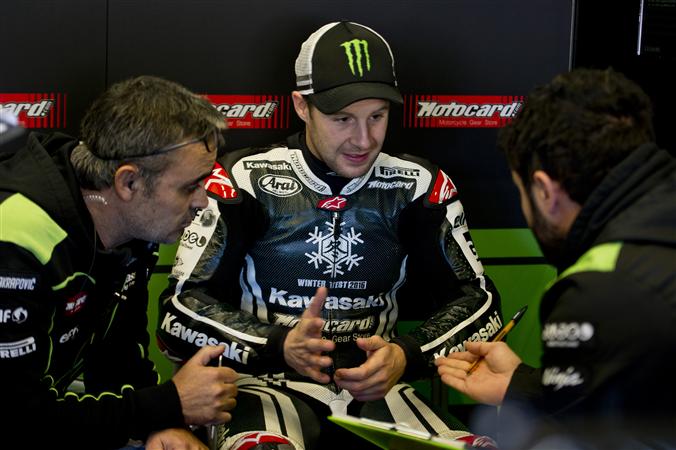 Kawasaki’s Jonathan Rea talks with his crew during testing at Jerez.

You can expect more coverage of WSB here on MD next year. Former MotoGP champ Nicky Hayden’s move to the series caught our interest, but frankly the racing is always top notch and exciting in the production-based series. The bikes are very fast, too.

Nicky Hayden got his first taste of his new Ten Kate Honda CBR1000RR, and he is already pretty quick. A sentiment expressed by Hayden, and others, following the Jerez tests might be boiled down to something like this: “The problem is the Kawasakis are too fast”. Kawasaki starts out with two great riders, of course, including 2013 WSB champ Tom Sykes and current champ Jonathan Rea (see the video featuring Rea below). The problem for the competition is the Kawasaki beneath these two men has frequently been too much to handle in the last few years, and both riders are already very, very quick on the all-new 2016 racer based on the production ZX-10R. How quick?

Wrap your minds around this. During the Jerez test, both Kawasakis were easily into the 1:39s, with Sykes posting a time that would have placed him ninth on the MotoGP grid earlier this year. That’s right, during shake-down tests of the 2016 model, Sykes posted a lap time quicker than the best qualifying effort at Jerez by Yamaha Tech3 rider Bradley Smith! On a superbike!

You might find the following post-Jerez press release from Kawasaki interesting, and take a look at the first in a series of videos featuring Jonathan Rea below. Here is the Kawasaki press release:

After four post-season winter tests the entire Kawasaki Racing Team have learned much about their all-new 2016 Kawasaki Ninja ZX-10R machines, particularly the riders Tom Sykes and Jonathan Rea. They left a four-day test session at Jerez in Spain as the top two riders on the time sheets, in addition to demonstrating the strongest pace on race tyres.

With four days on track this past week at the 4.423km long Jerez circuit, including a rest day on Wednesday, both Sykes and Rea exploited their ‘Winter Test Four’ opportunities to the maximum on the new Ninja, despite Rea missing out on some track time today after a fall that damaged his bike in the early afternoon.

Using a qualifying rear tyre to get a feel for the new Kawasaki on the same rubber the riders will use for Superpole qualifying in 2016, Sykes set a best lap of the tests today with a 1’39.313. This was well under his own best lap set at the 2015 Jerez race, of 1’40.292.

Rea was also running at a very high tempo when he tried a qualifying tyre, setting a 1’39.524 lap, in addition to a 1’40.1 best on race tyres. His race pace, like that of Sykes, was class leading in a test attended my most of their top rivals at some stage.

Sykes and Rea had pushed their machines to the limit at this test in late November, given the dry and relatively warm track conditions on each and every day. Each bounced back from falls at certain times as they tried new and sometimes experimental settings at their maximum potential. Each completed the tests in good physical condition and with positive feelings about their new machine and its possibilities for the 2016 season.

Winter Test Four is the last of the 2015 calendar year but the team will return to Spain for more track time on the all-new Ninja ZX-10R in January, after the end of the test ban period. After those sessions they should be at full readiness for the first round of the new season in Australia on February 28th, which will be preceded by the usual official organisers’ test at the host circuit of Phillip Island.

Tom Sykes stated: “We did a great time on a race tyre and also on a qualifying tyre. We have been fast on both of those over this week, so I am happy with that, but the big picture was working for race distance. Even this afternoon the track felt in bad condition compared to Monday and Tuesday, yet we have still improved our performance on used tyres. We still set some good lap times even after 22 laps. This was the most rewarding thing for me because this is something we have struggled with this year. If we can keep working in this way, with this mentality for the tests in January, then this is all we can ask for. It has been great so a real big credit to the mechanics because we had a few offs at the beginning of the week and they had to work hard. With the amount of changes they have made to the settings they have not stopped. Thanks to Marcel and Danilo for doing a good test plan and giving me what we need.” 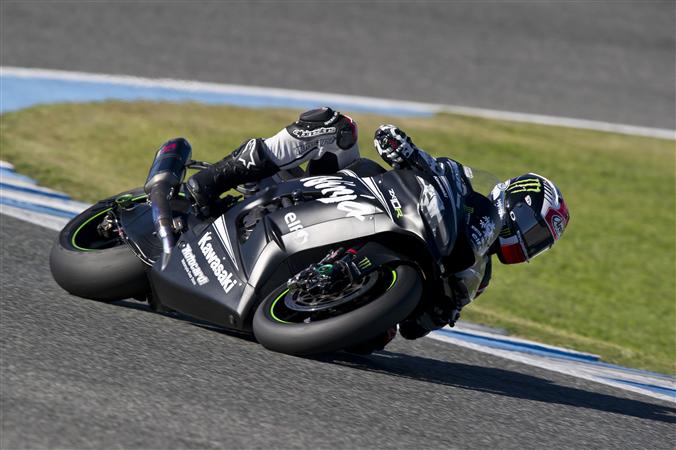 Jonathan Rea stated: “All in all I am really happy because we have done lots of race simulations and tests already in November, which for me is unheard of. We used a Q tyre today, which was really good. It opened my eyes a little bit to where we can improve the set-up of our new bike a bit further. For the rest, pretty much until yesterday, we had finalised the main items to test. So today went back to a front set-up and confirmed some things with that. Everything was going OK and I was making runs on race tyres. I’m sure I could improve my lap time today, but I’m really happy with the job. The bike seems to be working already as a good base and I am happy to finish the test healthy and enjoy the break until we resume again in January.”

Marcel Duinker, Tom Sykes’ Crew Chief, stated: “Tom had two very little crashes on Monday and a little bit bigger one on Tuesday but that is part of the job. Really, it has been a very good test because we have done all the items over short and long distance. We have made three race simulations over the three days and every time we did one the pace was better. We have done 345 laps over these four days. We tested a qualifying tyre today and we had a very good result with that. He feels the bike well over one lap but more than well over race distance. We have achieved out goals and we can enter our six week break with a happy face and concentrate then on the first January test.”

Pere Riba, Jonathan Rea’s Crew Chief, stated: “The 2016 bike is a positive step because it is much faster. We have to keep working and understanding the bike, but we are really happy. Johnny crashed two times over the test pushing the limits of the bike and we understand very well. It is good to have this chance now than in the season. We have already made some race simulations and we used one qualifier to understand where we are with those tyres. With that we did a 1’39.5 on that and with a race tyre we did a 1’40.1. We have collected a lot of information and now we will study and understand it all for the next tests.”

Guim Roda, KRT Team Manager, stated: “We finish today as the last one on track for the 2015 season. It is not the last day of the 2016 Winter Tests as we will continue in 26th and 27th of January in Jerez again. We improved the areas we needed to focus on, comparing with last year’s performance, and we succeeded. The new base roadgoing model Ninja ZX-10R is really a big step forward. Johnny and Tom made, of course, a fantastic job. They even worked too to find the limits of the bike, to understand the areas they cannot cross into on a race weekend. I’m sure with all the information we got from these days everybody will work hard to prepare the items we need to start the 2016 season in Australia. The overall idea in the next tests will be to confirm all the inputs and data to set the performance for race one in Australia. Thanks again to Kawasaki, ELF, Motocard, Monster, Akrapovic, Bubel, MRA – and all the sponsors, suppliers, fans and everybody who is pushing us every weekend to improve our performance. And the very last thanks to Tom and Johnny for their pure spirit to push the limits every lap corner and every lap they ride with the KRT Ninja ZX-10R WorldSBK bike. See you in 2016.”