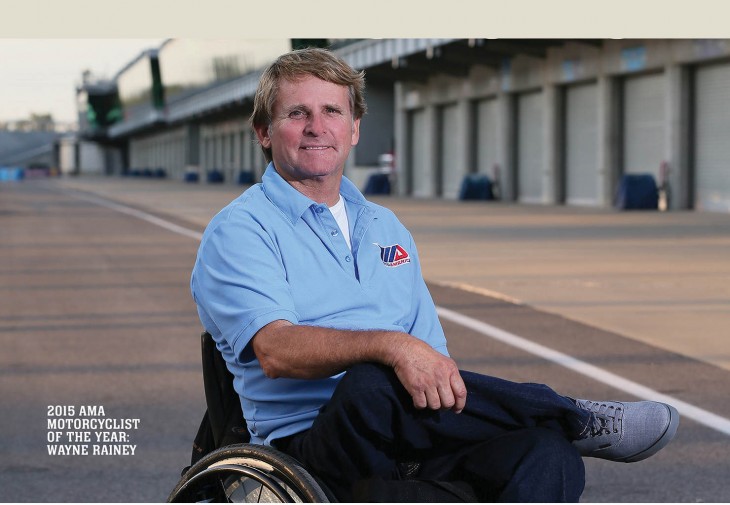 Already in the Hall of Fame, Wayne Rainey is receiving the Motorcyclist of the Year award for 2015 from the AMA. The former Superbike and GP champ is in the midst of perhaps his greatest challenge, i.e., rescuing U.S. road racing from the depths plumbed by DMG. Rainey and his partners have completed their inaugural year of  MotoAmerica racing, but, immediately, the new series has brought credibility and common sense organization back to the sport in this country. Let’s hope fans and manufacturers give MotoAmerica their full support as it moves forward.

Here is the announcement from the AMA:

The AMA Motorcyclist of the Year award recognizes the person or persons who had the most profound impact within the motorcycling community in the previous 12 months. It is awarded annually by the AMA Board of Directors.

“Wayne Rainey and his partners and employees at MotoAmerica demonstrated in 2015 that they had the knowledge, fortitude and collective wisdom to not only restore professional road racing in America to greatness, but to reinvigorate an industry and fan base that had been languishing for years,” said AMA President and CEO Rob Dingman.

“That success is built firmly on the foundation of Wayne’s character and perseverance to be successful at what so many before him have realized is one of racing’s most challenging tasks,” Dingman continued. “Where others failed, Wayne is succeeding, and his efforts transcend the sport itself in many ways.

“It is therefore my great honor to recognize Wayne Rainey as the 2015 AMA Motorcyclist of the Year,” Dingman said.

“One season alone does not make a successful race series,” Dingman said. “But guided by Wayne’s ideals of fairness and integrity, and his overarching goal of preparing U.S. riders to challenge for world titles, MotoAmerica is clearly on a path toward long-term success.”

The full story of Rainey’s creation and development of MotoAmerica can be found in the January issue of American Motorcyclist, the official journal of the AMA.