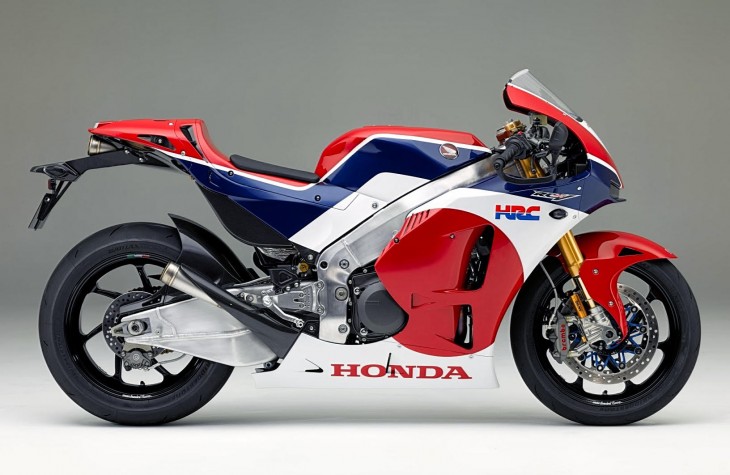 Will Honda homologate (manufacture and sell sufficient units to qualify as a base for WSB competition) a relatively exotic V-4 superbike for the 2017 model year? We already know that Nicky Hayden was promised, and is expecting, a new bike, and his new team boss Ronald Ten Kate has made vague reference to the same thing.

It all makes sense. The production model upon which Honda developed its current WSB racer dates back to 2008. Honda is already selling the exotic, and ridiculously expensive ($184,000) RC213V-S featuring a V-4 engine displacing 999 cc. Will Honda be content to simply update the inline four CBR1000RR next year, or will it deliver a second V-4 machine (more expensive, but far cheaper than the RC213V-S) to homologate for WSB racing?

British magazine MCN has weighed in with its own opinion that Honda is likely to offer two new superbikes next year, including a more race-oriented V-4. MCN quotes Honda R&D head Tetsuo Suzuki regarding the future production models as follows: “In terms of the future of the Fireblade [known as the CBR1000RR in the U.S. market] we do not want to make something that is as extreme as some bikes, like the Yamaha R1M for example. The performance and concept [for the CBR1000RR] is not aimed at track riders; that’s not the purpose of the bike. The concept is to have a usable road bike. As far as the possibility of an RVF1000 that will be derived from a cheaper version of the RC213V-S platform and engine, then that is one possible path.”

We think Nicky Hayden will be competitive in WSB next year despite the older CBR1000RR platform beneath him, but something better is definitely coming from Honda.