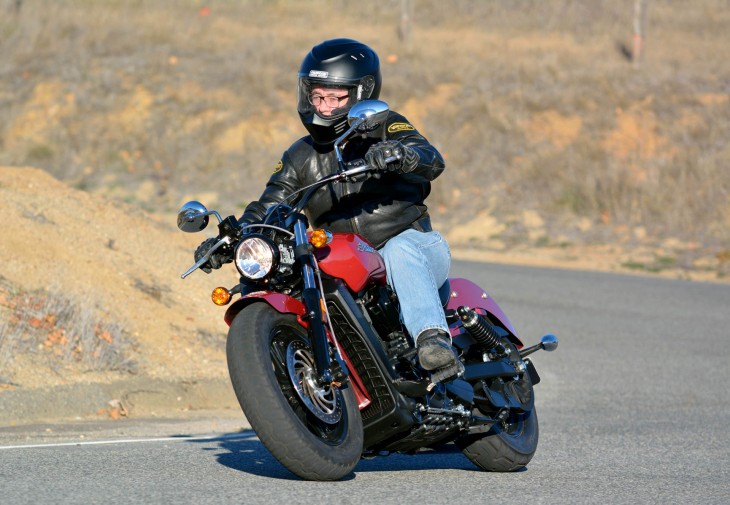 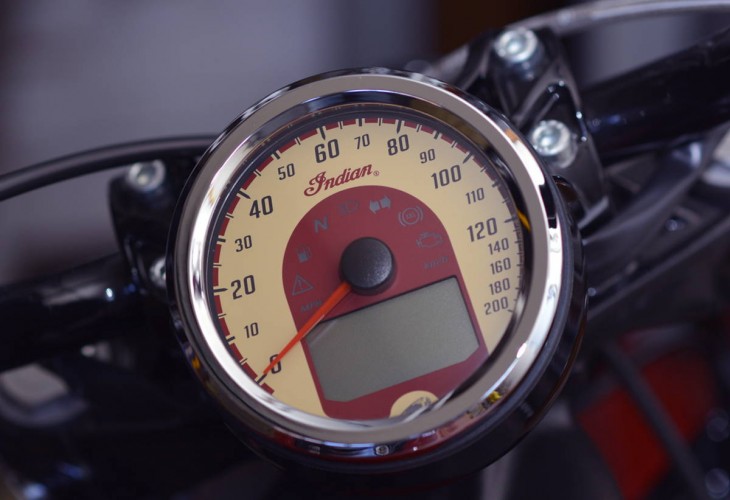 This is our second and final report on our test of the 2016 Indian Scout Sixty. You can find Part 1 here. The new Scout Sixty had a familiar feel after testing the standard Indian Scout model at the Sturgis launch a couple of years ago. With notable differences principally related to its smaller displacement engine (999cc vs. 1133cc). In some ways, we like the little brother Scout Sixty better than the standard Scout.  Read on.

The Scout Sixty has a rock-solid feel. The steel backbone frame is stiff, but provides a more “organic” feel than one gets from the typical aluminum frame. It feels like a cruiser in the sense that, while vibration is well controlled for the category, there is plenty of “feel” both from the chassis and the big engine pulses delivered by the v-twin.

Strangely enough, it also feels like an “American cruiser”, which is somewhat difficult to put into words. When you ride a Harley Sportster, for instance, it has an unmistakably old school, heavy feel about it. The Scout Sixty definitely has a stiffer, livelier feel than a Sportster, but it still has that “American Iron” vibe about  it … if that makes any sense.

That vibe, literally, includes a pretty good jolt when the suspension encounters anything remotely resembling a pothole. Mark this down to the cruiser-ish short suspension travel, particularly from the twin shocks out back (3.0″). Despite that, the Scout Sixty handles more common road conditions, including bumps and rollers, quite well for this class of motorcycle. Enough so that you can hustle the bike pretty well through twisty roads.

Excellent ground clearance helps (Indian claims “best in class” lean angles) and the Scout Sixty can encourage some frisky riding. Nevertheless, the stock tires (branded Indian, but made by Kenda) serve their purpose well, but don’t offer much feel. The tires seem to have a stiff carcass and aren’t really meant for sporty riding. Fine for most cruisers, but some riders would really appreciate sportier rubber on the Scout Sixty, which has cast wheels and can accept modern, tubeless radials. The tire sizes on the Scout Sixty, however, make finding alternative rubber difficult. The front is a 130/90 x 16 and the rear is a 150/80 x 16. 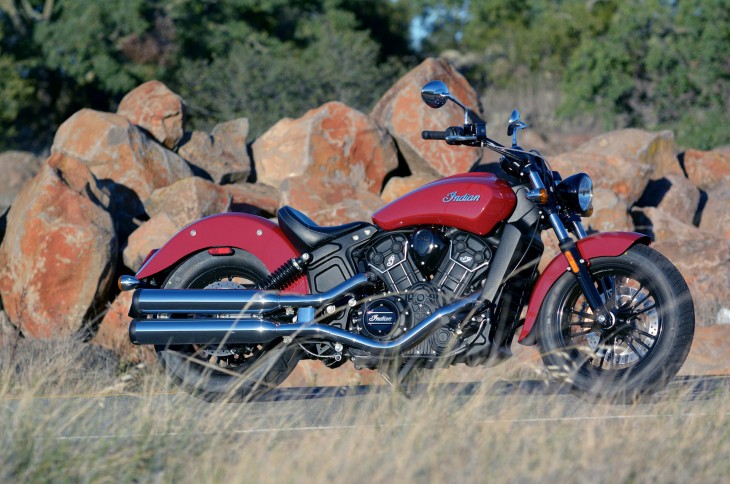 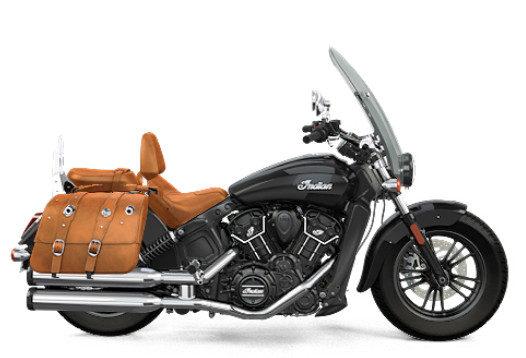 As we reported in Part 1, the smaller v-twin in the Scout Sixty is plenty powerful. Indian also put a five-speed transmission in the Scout Sixty, while the standard Scout has a six-speed. Five speeds is plenty, and the gear spread works well both around town and on the highway. For the most part, the transmission shifts easily, and positively on our test unit, but we have occasionally missed the three-four upshift and caught a false neutral.

The seat on the Scout Sixty is very comfortable. On longer rides, the foot-forward ergonomics can place too much weight on the tailbone, however, but this is true of virtually any cruiser. Overall, the seat shape and padding is excellent. Indian has a number of accessories available that will allow you to add luggage and/or wind protection, for instance. Indian also has kits to change the ergonomics, such as by extending or reducing the reach to the bars and controls. Of course, passenger seat accommodations are available as well. You can see a picture of an accessorized Scout in this article. 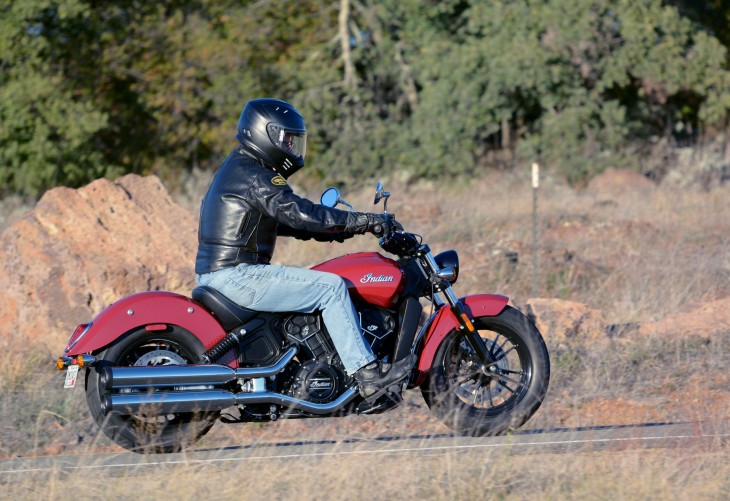 The Scout Sixty not only handles well, it stops well despite the use of a single disc brake in front. We did not test the bike with a passenger and/or luggage, however. We suspect the stock brakes could handle that extra weight adequately. The brakes not only have good power, they provide enough feel to modulate them even when stopping quickly.

The Scout Sixty is a blast to ride. We don’t think of this as a Harley Sportster competitor (although it is one to some extent). The Scout Sixty is really a do-it-all motorcycle with traditional American style and ergonomics. The chassis is good enough that it would work well as a sportier model with more upright, standard ergonomics and a shorter wheelbase. It would simply need longer suspension travel added to that equation. 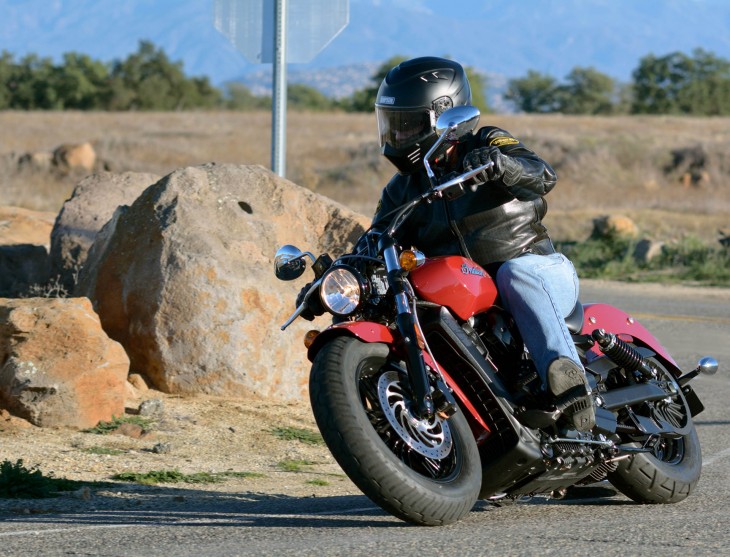 So the less expensive little brother to the Scout is, in our opinion, an excellent motorcycle offering good value. The bike is good enough, and inexpensive enough, that we could see riders buying one even though they typically shy away from the cruiser category. The Scout Sixty has a clean, minimalist style that appeals to us, together with that intangible “American character” so sought after in the cruiser category. It’s a winner.

The U.S. MSRP of the Indian Scout Sixty starts at $8,999 for the Thunder Black model. Add $300 for Indian Motorcycle Red (the model we tested) or Pearl White. Take a look at Indian’s web site for additional details and specifications or to check out some of the many accessories available for this model.