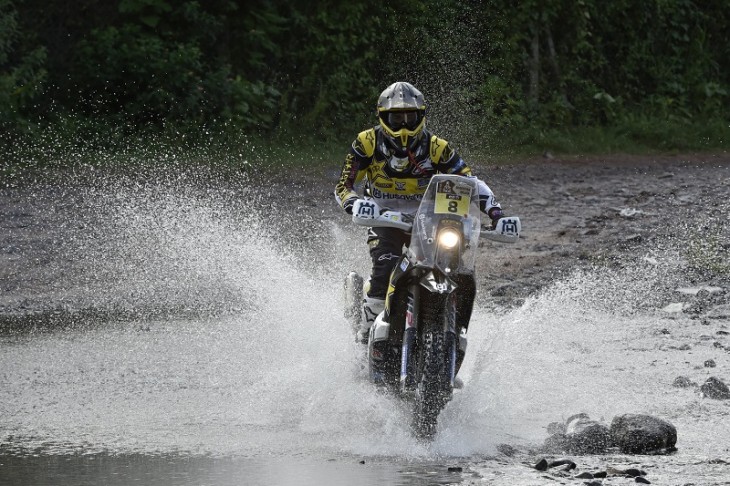 The 2016 Dakar Rally continued in Argentina on Tuesday with Rockstar Energy Husqvarna’s Pablo Quintanilla as the factory team’s fastest rider in a shortened stage three. Quintanilla crossed the line in sixth place but was just over a minute behind stage winner Joan Barreda and Spain.

Quintanilla and teammate Ruben Faria of Portugal are well positioned in fifth and sixth place in the general standings where the top ten riders are only separated by five minutes. Tuesday’s stage took riders from Termas de Río Hondo to San Salvadore de Jujuy over a total distance of 412mi. Originally it was to have a timed special of 195mi but with track conditions still difficult as a result of heavy rain, it was reduced to just under 124mi.

Quintanilla: “Today was better for me because we made some changes to the suspension overnight and I felt good. The stage was also better than yesterday, but the same kind of terrain and only basic navigation.”

It was a more complicated story for Faria who said he made a mistake at the refuelling stop and 50mi before the end of the timed special he noticed his front tank was empty. Having to rely on what was left in his second tank, he had to take it easy to finish the stage. “I rode at 31mph for the last 50mi and I lost about 5-6 minutes,” he said. Although he is now four minutes off the leading time in the overall standings, Faria is one of the most experienced Dakar riders and will have the opportunity to make it up. Wednesday takes the competition into much more difficult territory with more navigational challenges and an average altitude of 11,483ft.

Pela Renet, the third of the trio of Husqvarna factory riders and new to rally raid is increasingly comfortable with the competition format and the Husqvarna FR 450 Rally machine. He was just 4 minutes 36 away from the stage winner’s time and continues to move up the order.

The Frenchman is taking a day-by-day approach and trying to avoid any serious mistakes. He finished 22nd in the stage, just over four minutes behind the leader and is now 39th in the general standings. “It was better than yesterday,” he said. “I started more towards the front this morning so it was a bit easier with the dust. I was able to make up a few more places for a better starting position tomorrow. I don’t want to make any stupid mistakes and crash. I am taking my time to learn and I don’t want to go too fast.”

Husqvarna-supported rider Jacopo Cerutti of Italy is 19.34 behind the leader in the overall standings. He is contesting his first Dakar after winning the right to enter following a good result in the 2015 Sardegna Rally Race, A Dakar Challenge event.

Wednesday is a long 391mi loop around San Salvadore de Jujuy and weather permitting they will contest a special of 267mi. As this is the first part of a marathon stage, riders are not permitted any mechanical assistance from their teams, so caution will be required to care for their machinery and their tires.