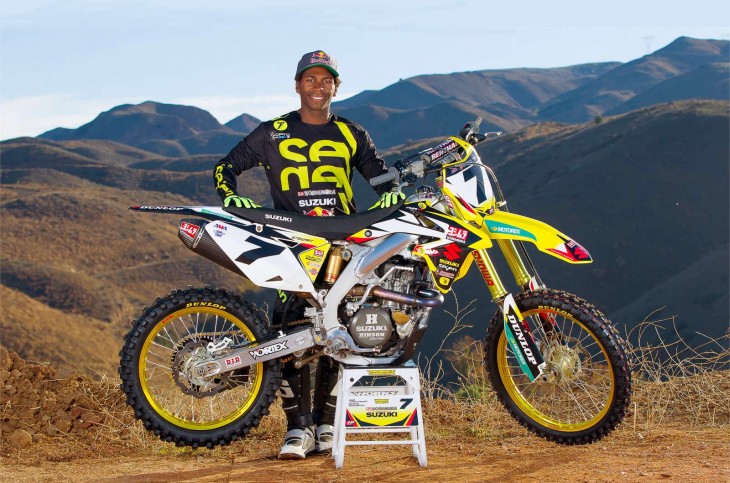 Following a failed drug test at the Seattle Supercross in early 2014, motocross/supercross great James Stewart was suspended by the FIM for a lengthy period of time that effectively removed him from the racing calendar in 2015. An appeal by Stewart of the FIM’s suspension was denied.

Finally back on the track for the opening round of the 2016 Monster Energy AMA Supercross series at Anaheim on January 9 of this year, Stewart suffered some horrible luck early in the main event when current points’ leader Ryan Dungey (KTM) collided with him in a corner. Stewart went down hard and hit his head … rendering him unconscious for a short period of time. The resulting concussion not only ended his race on January 9, he has missed rounds 2 and 3 of the series in San Diego and back at Anaheim, respectively.

Stewart is considered by many to be the fastest off-road rider ever, although his career championship total falls well short of Ricky Carmichael’s. Stewart has phenomenal natural speed, but despite obtaining several AMA championships, he is known almost as well for his tendency to crash and injure himself. Now 30 years old, Stewart had high hopes for this supercross series. He is expected to race next weekend in Oakland, but his chances at a title this year are all but lost with zero points after 3 rounds.

Interestingly, his old nemesis Chad Reed (now aboard a Yamaha), is showing great speed this year, having taken second place at each of the last two rounds. At 33, Reed is the oldest rider currently competing in the supercross series.

Here is the press release issued by Yoshimura Suzuki just prior to this weekend’s Anaheim round:

Chino, CA (Jan. 22, 2016) – Yoshimura Suzuki Factory Racing rider James Stewart will miss this Saturday’s Anaheim II Supercross. Stewart rode late this week, but still is not feeling 100 percent fit to race. He is slated to return to action for the following round in Oakland, California, on January 30th.

Stewart was briefly knocked unconscious in the season opener at Anaheim I on Jan. 9, while running near the front early in the main event. He ran in practice in San Diego this past weekend before electing to not race.

“James rode yesterday and today and felt he still wasn’t back to where he wants to be to race,” said Mike Webb, Yoshimura Suzuki team manager. “The team is happy that James is taking a cautious approach to his return and we’re encouraged by his progress. We want him to feel fully prepared before he gets back into a racing situation and with the improvements he’s making he feels confident he’ll able to race in Oakland.”

Stewart’s teammate Blake Baggett has been back on the practice track and is getting back to fitness quickly. He was injured in a pre-season testing fall and is also slated to be back in action at Oakland.

“We’re looking forward to having both James and Blake back for Oakland and having the team back to full strength,” Webb concluded.