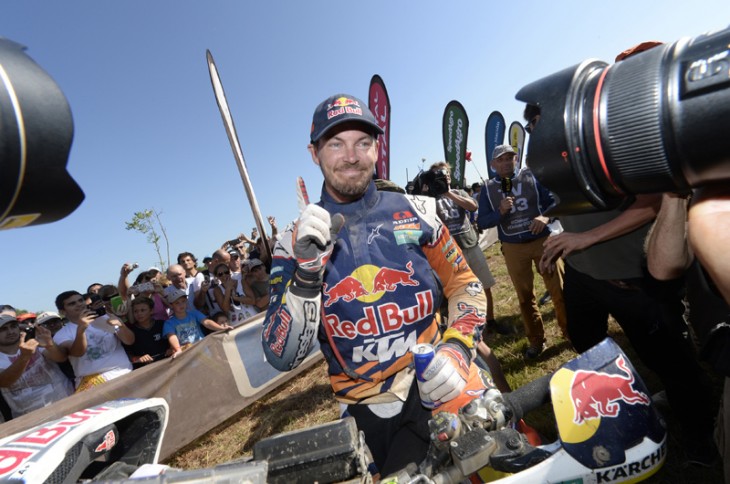 The grueling Dakar Rally ended yesterday with Team Red Bull KTM taking the top two spots on the podium. The overall winner was Toby Price. This is the 15th win for KTM, but only the first time an Australian has won Dakar. Here is the press release from Red Bull KTM, which includes the top 10 finishers in the motorcycle category.

Red Bull KTM factory rider Toby Price on Saturday won the 2016 Dakar Rally to give KTM, the Austrian brand its 15th victory in the world’s toughest annual rally raid. Price’s victory was also the first time an Australian rider has taken the title and the first time in the history of the event that a rider had won it on a second attempt. Price raced his first Dakar last year and he took a podium third.

Price, who wrapped up the more than 9,000km ride in 48 hours nine minutes 15 seconds, finished an impressive 39 minutes 41 ahead of second placed KTM rider Stefan Svitko of Slovakia. Pablo Quintanilla of Chile was third overall, his best ever Dakar result.

Speaking after the stage, Price said: “Winning in my second participation is awesome, but being the first Australian to win the Dakar is just insane. I would’ve never imagined this two years ago. Finishing the rally is already a triumph. Winning it is amazing! I tackled the race in true Aussie style. I attacked when I had to, when the time was right, and I kept an eye on my bike during the all-important marathon stages. I also navigated quite well. I hope this is just the start, to win again. It won’t be easy, so I’ve got to savour this victory.”

The Australian was a dominating presence throughout the rally, which this year also had to deal with extreme weather conditions ranging from thunderstorms and flooding to intense temperatures. Aware that he had to prove his third place podium in 2015 was no coincidence, he prepared well and picked up his first stage win in the second stage after the first one was washed out by thunderstorms. He went on to survive the high altitudes of Bolivia, won stages 5-6 and before the rest day in Salta he had moved into second overall. Refreshed and recharged, Price went on to win the eighth and ninth stages to firmly establish himself as the man to beat.

As the rally went into more difficult navigation and at times blistering temperatures, Price continued to manage the final four stages to start the final day with an impressive 37.39 advantage. By the finish he had added another minute and a half to this time advantage.

It was a best ever result for Svitko who raced his first Dakar in 2010 and who was fifth overall last year. He was the stage 10 winner and despite a small setback in the next stage was consistently among the top three all the way to Rosario.

Third placed Quintanilla finally took the third overall after a great rivalry between him and Red Bull KTM’s Dakar rookie Antoine Meo. Right up to stage 12, the third place could have gone to either rider but Meo crashed hard 40km from the end of the penultimate stage. He struggled through to the end of the final stage clearly suffering from the effects of the crash but still managed to finish seventh overall. Meo, a multi enduro world champion, has made a smooth and impressive transition into rally raid and leaves the competition as the stand out rookie and a double stage winner.

KTM factory rider Laia Sanz finished an impressive top 15, thus achieving her pre-rally goal. She also did it after riding the last two stages with a high temperature and a broken collarbone and in doing so underlined her skill and her enormous fighting spirit. Factory teammate Jordi Viladoms laboured during the first week with the effects of a fever and although his health improved in the second half of the rally, he had to settle for overall 17th.

Factory team manager Alex Doringer said he was happy and proud of all of his team, but also underlined the two weeks of the rally had been very, very tough. He said that the retirement of five-time Dakar winner Marc Coma last summer had in fact opened the door to a new generation and the reward was to be seen on the podium.

Doringer: “I could see Toby was a top guy with potential and good navigation skills. He did an amazing job and I am very happy for him. When I brought him into the team I was very happy to do something for my old friend Kurt Caselli. He was the one who encouraged me to try to get Toby to the Dakar and today we see the result. I am also very proud of Antoine (Meo). He did so well in his first Dakar and he will be very good in the future. He was incredibly brave to ride to the finish today after he had a very big crash yesterday, but he wanted to be with the team at the end. It has also great to see the team spirit and the friendship that has built up between Toby and Antoine. Even though Toby was heading for the win, today he rode all the way behind Antoine to make sure he was going to make it to the finish.

“Jordi (Viladoms) had a tough two weeks because he was sick almost the whole time and he wasn’t able to get back his strength to have a good result. But he is incredibly important for the team, and especially the way he helps and advises the young guys.  And Laia (Sanz) well, she is unique the way she is able to fight, and we all have a huge respect for her. Everybody likes her and we’re so happy and proud that she is riding with us. It was perhaps not the result she was hoping for, but considering that she had a big crash and was also sick, she did an amazing job. We are also super happy to have one of our customer bikes on the podium and this is what we work for.”

Doringer paid tribute to all of his extended team for their efforts and also thanked the KTM Board members and KTM Motorsports for all the support and encouragement they offered to the factory rally team.

The Dakar Rally 2016 was very successful for KTM. Five of the top 10, and 12 of the top 20 finishers rode the Made in Austria KTM bikes.