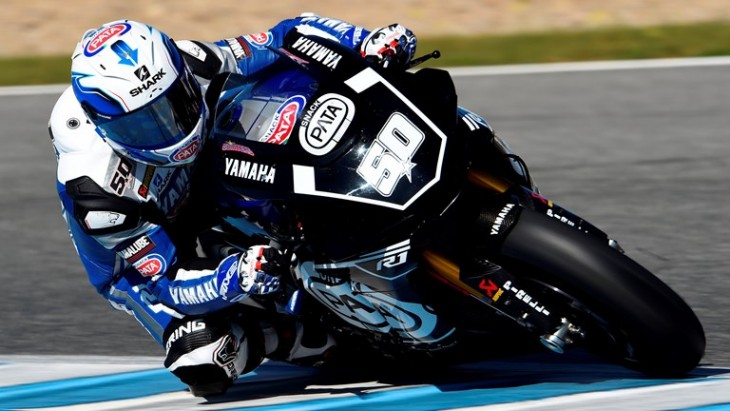 Pata Yamaha Official WorldSBK Team concluded its final European pre-season test at the Circuito de Jerez, in Spain, today with Sylvain Guintoli and Alex Lowes both satisfied with the progress made with their YZF-R1’s.

Hampered by thick fog for the initial hours of both Tuesday and Wednesday’s track time, Lowes and Guintoli made the most of the subsequent good weather setting 102 and 116 laps respectively across the two days. The Frenchman set his fastest time of 1:41.018 on his penultimate revolution, his British teammate’s 1:41.361 laid down five laps from the close of play.

Evaluating a raft of new settings and parts, including swingarm, suspension, engine specifications and electronics, the Pata Yamaha team are confident of the advancements made and understandings gained throughout the past four days on track and will look to continue the progression back at its German and UK bases.

Lowes and Guintoli now have their sights firmly set on the start of the 2016 MOTUL FIM Superbike World Championship, as the Pata Yamaha Official WorldSBK Team prepares to travel to Australia ready for the official championship test at Phillip Island on Monday 22nd February.

“It’s gone well! We’ve completed everything we wanted to do, to test and to explore. We’ve focused on various things including carrying on working with the new swingarm, riding position, back-shifting, engine-brake strategies, new forks and different configurations within them, and traction control, so we’ve done a lot! We have a lot more experience with the YZF-R1 now, a lot more of an understanding, so now we just have to take this with us to Australia and carry on the good work!”

“We have a lot still to do but it’s been a good two days. We have been working through everything including front and rear feeling, and a lot of work on electronics – trying to get a better understanding of the YZF-R1 and its engine character. I was limited with my shoulder so I couldn’t push too much but I enjoyed it and hopefully we can improve quite a bit before Phillip Island.”

“These additional two days in Jerez have been very important for the Yamaha WorldSBK project – with a new bike, new riders and a new project every lap is a benefit. We’ve really learnt a lot and we have to thank the technical team at Yamaha Motor Europe and the Crescent squad for their dedication and hard work in getting us ready to start the season.

“Sylvain did a very consistent job getting through a huge programme of test items and remaining extremely precise and steady which is incredibly important for the development of the bike. When a rider is that consistent it generally means there is something left in the pocket in terms of performance so we are looking forward to getting to Australia now and seeing Sylvain more in race mode than test mode and taking the next steps.

“For Alex every lap has been a bonus – considering the extent of his shoulder injury – and it was as affected here in Jerez as it was in Portimão, restricting him to short runs and limited laps in general. Despite that, Alex has done an incredible job, he’s given the team excellent and accurate information and his own understanding of the YZF-R1 has increased dramatically over these January tests. Alex didn’t run a qualifying tyre and his pace on the race tyres , despite the injury, was less than half a second away from the fastest, so when we consider the state of his shoulder we are quietly confident that we can be closer again when it’s time to go racing.”