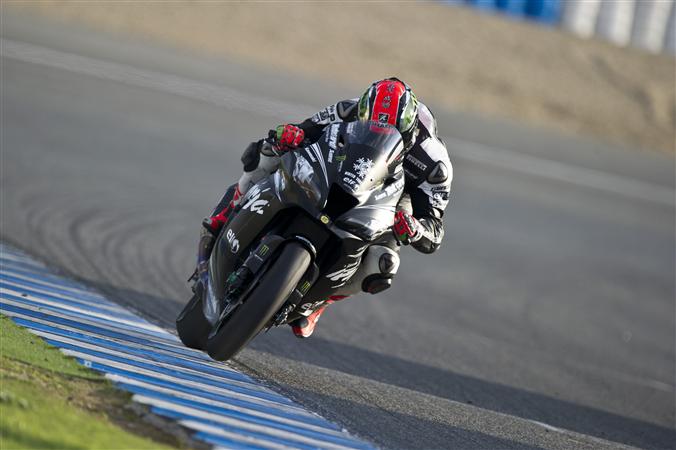 Tom Sykes (KRT) secured the fastest time of a two-day test at Jerez in Spain after a strong showing of overall pace. His team-mate Jonathan Rea took the seventh best time, as the reigning champion worked on optimising the base set-up of the new Ninja ZX-10R in readiness for the new WorldSBK season.

The track conditions at this test did not replicate the grippier ones the team found in their previous Jerez outing in November. Despite this relative lack of grip Sykes managed to be the only rider from the 27 present who got inside the 1’39 bracket with his 1’39.924, achieved after using a qualifying rear tyre.

Rea, who did not use a qualifying rear, still set a best lap time of 1’40.856. He continued to experiment to find his ideal base setting on the new Ninja ZX-10R, which he and Sykes both rode in the recent global launch of the new Kawasaki showroom model in Malaysia.

Sykes has settled into the on-track groove of the new Ninja ZX-10R WorldSBK machine comfortably from the first tests. At this Jerez test concentrated on reconfirming the choice of some items that were settled on before the winter break.

Rea did not make a long run at this test, preferring to make lots of laps on used tyres, as he and his crew evaluated different chassis settings and engine characteristics.

A damp track surface to start on day one and fog early on day two held back the overall lap count for all riders at Jerez but conditions improved to ensure a productive period of work in the sunny afternoon sessions. Sykes managed to put in 126 laps and Rea 122 across the two days.

The entire KRT squad will now move right across Spain to make their final European winter tests at the Motorland Aragon circuit, between 3 and 4 February. The first races of the year take place in over final weekend of February, under the new format of one race on Saturday and the second on Sunday.

Tom Sykes stated: “All smiles round here because basically we have changed a lot of settings, exploring more parameters with the new bike. We have a good opportunity to explore many things. All credit to Marcel and Danilo and all the mechanics because they are working overtime and I am just riding the bike. It is confirmation of what we have developed in previous years that we have done a good job because this new bike is the ‘baby’ from those years. It is working well for both riders and Kawasaki has done a great job. There are still areas where I want to improve both the bike and me but to come away from both winter tests in Jerez fastest is good, because it is not my strongest circuit. This adds to the excitement and motivation for the coming season on the new Ninja ZX-10R.”

Jonathan Rea stated: “It is clear that the new bike has been developed more for another riding style and it asks you to ride in a certain way. So we are still exploring exactly how to extract the best out of the bike and we have changed many things. It was clear that when we arrived here the track grip level was much worse than the last time, so it required a little bit of a different set-up. Our testing philosophy this winter – testing big items and not getting carried away with the set-up – has really made sense here. It was the same track, same part of the world but a different character this time. We had a new fork specification to try and a different engine character. We are just using the tools in the toolbox now and understanding more about the new Ninja ZX-10R. We have been working calmly and methodically and if the starting lights went out at Jerez tomorrow we would not be seventh.”

Marcel Duinker, Tom Sykes’ Crew Chief, stated: “Tom used a Q tyre for the fastest lap and it seems the track was not the same as it was in the November tests. We need to be fast and consistent in any condition and we did a lot of our job during the test in November. When we finished that we gave our package its shape so here it was a matter of trying out small test items and polishing our bike to prepare ourselves for the season opener. We are ready to go to Phillip Island now but we have another two days at Motorland Aragon, a different type of track, where we can confirm our pace and consistency.”

Pere Riba, Jonathan Rea’s Crew Chief, stated: “Winter time is to understand the bike and its reactions to changes and different situations. It gives the rider time to understand different things and time for us to follow our test plan. This is a new bike and there are still important points that we are looking to understand it more, to find out what the best base point is. This also relates to the track grip and these two days have been useful because the grip this time was not so good. That lets us understand how to make improvements in case we have these conditions in the real race. We have been working with tyres that have done over 20 laps just to comprehend where we are. We did not make a long run, a race simulation, but we did many laps. The important thing is to arrive in Phillip Island for round one with a good package in many different situations.”