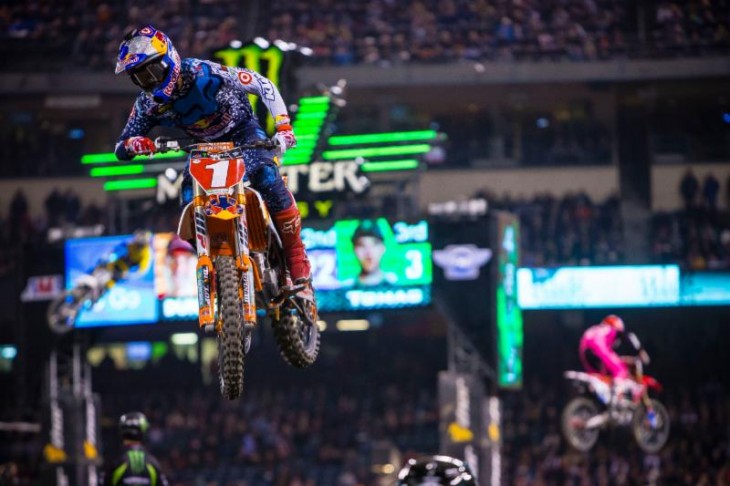 Some key insights to watch heading into this Saturday night’s race include:

Last Saturday night at the second of two races held at Angel Stadium in Anaheim, California, Dungey made his move in the 20-lap 450SX Class Main Event on Lap 3 to pass early leader, BTO Sports/WPS/KTM’s Davi Millsaps, and ride to the 24th win of his career. Tied with James Stewart at fifth on the all-time 450SX Class podium list, Dungey can move into sole possession of the position this weekend in Oakland if he finishes within the top three. Another top-three finish effort would also extend Dungey’s impressive podium streak that now sits at 19 dating back to last season.

“I had to charge the first five laps,” said Dungey after his win last Saturday night. “Chad [Reed] was on it tonight, and I know he wanted to get his ninth win here in Anaheim.”

“You know, last week, I was happy, and I keep telling myself this year that I want to be appreciative for seconds and just being up on the podium,” said Reed. “But, man, I’m a competitor. I’m a little bummed with that ride. I felt it was a really fun track, a lot of challenges out there with the whoops and the ruts, and I would call that a track that normally suits me. And I struggled; I struggled all day. So, to struggle and not feel 100%, to get a second (place finish), I’m really happy. I think consistency is the key. It takes 17 rounds, and I’m aware of that. We’ll take the little things, and try to build on it for next week.”

Rockstar Energy Husqvarna Factory Racing’s Jason Anderson, who scored the first win of his career at the season opener in Anaheim, sits third in season standings. Anderson has been consistent, finishing fifth in the last two races (He finished third in San Diego but was later penalized by race officials for jumping during a red cross flag situation for a downed rider that requires riders to keep wheels on the ground).

With Dungey out front, only three points separate positions second through sixth as the battle for second place heats up in Oakland.

Chasing after the 10th win of his 250SX Class career, Webb brings an 18-point lead into Oakland, a city where he has yet to earn a win. Once again, Webb made up for a les-than-perfect start last weekend in Anaheim but found the speed to catch and pass early race leader Christian Craig on Lap 10.

“It (the race with Craig) was really fun, actually,” said Webb. “I hadn’t had a battle like that in while. We were battling each other back and forth. I was kind of hoping that neither of us would take each other out, and we were allowing Zach [Osborne] to catch us, so, it was almost a three-way battle there for a bit. I’m just pumped with the whole night. All day, I kind of struggled with settings and the track. I went from being one of the slowest guys in the whoops to the fastest in the main. It was just, overall, a good day. To win like this is awesome. I love it!”

After finishing in a season-best second place last weekend, Rockstar Energy Husqvarna Factory Racing’s Zach Osborne sits second in season standings. Looking to build off his sixth-place finish at last year’s race in Oakland, Osborne would like to pick up his ninth-career 250SX Class podium.

Following an eighth-place finish at the season-opening race, Monster Energy/Pro Circuit/Kawasaki’s Joey Savatgy, who is third in season standings, has finished second and fourth, respectively, in the last two races.

Like the 450SX Class, the battle for second place is one to keep an eye on. Positions second through 10th are separated by just six points.