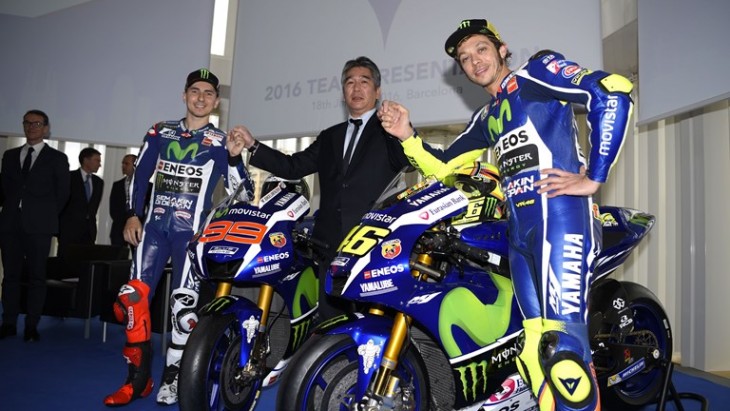 Today the Movistar Yamaha MotoGP Team has lifted the suspense for racing fans the world over waiting for the kick off of the 2016 season. The Italian-based team gathered in Barcelona today to officially launch their 2016 campaign to defend last year’s MotoGP Triple Crown victory. Though the team has been on ‘winter-break’ since the Valencia test in November 2015, they have not been idle. The Yamaha engineers carried through extensive development of the YZR-M1 all through the winter and the same dedication was given by the Spanish rider Jorge Lorenzo and Italian rider Valentino Rossi whilst completing thorough training to be ready for the next season. The results are undeniable; this year a terrific team is formed again, ready to prove that they are the best in the world.

Similar to the continuation of the rider line up, the team’s sponsors also remained the same. For the third year in a row the Yamaha Factory Racing Team and Spanish company Telefónica form a strong partnership ready to oppose the competition in the premier class of road racing. Their present five-year collaboration started in 2014 and has proven to be a recipe for success, making Telefónica‘s headquarters the perfect venue to unveil the 2016 livery for Lorenzo and Rossi’s YZR-M1s.

Five-time World Champion Lorenzo had a challenging start to the 2015 season but turned his fortunes around after the fourth round in Jerez, which he led from start to finish. Once he returned to winning form, he became unstoppable and duplicated his dominating win at the following three rounds, breaking the record for leading most consecutive laps. Back in the game, he chased his teammate, who was leading the standings, to arrive at Silverstone in joint first place. The duel for the title between the teammates would last until the very last lap of the final round in Valencia; in the end it was Lorenzo who got to lift the Championship trophy with his seventh win of the season.

Nine-time world champion Rossi had racing fans all over the world cheering in 2015 thanks to his impressive season. He made clear he meant business right at the first round in Qatar, which he won. ‘The Doctor’ went on to secure eleven more consecutive podium finishes and topped the standings for most of the season. In total Rossi only missed out on the podium three times through 2015 and was a more than deserving runner-up, with just a five-point difference to his teammate.

The 2016 Movistar Yamaha MotoGP Team line up is unveiled for the first time at Torre Telefónica Diagonal 00 in Barcelona, Telefónica‘s headquarters.

The ceremony saw the 2016 Yamaha YZR-M1 revealed in its new colours with a refreshed livery.

Yamaha is pleased to confirm continuation of its numerous sponsors, including:

The team now travels to Malaysia where the season will officially kick off with the first test at Sepang on February 1st to 3rd. This will be the first opportunity for the riders to break in the 2016 YZR-M1 before attending two more winter tests in Phillip Island (Australia) and Losail (Qatar), while getting ready to begin the championship in Qatar on March 20th.

“I am very pleased to start the 2016 season with Movistar once again as our title sponsor as we enter the third year of our five year Agreement. The partnership goes from strength to strength with an ever-increasing list of successes both on and off the track with our sporting results as well as our marketing collaborations.

“Last season we enjoyed an especially fruitful year, securing the MotoGP Triple Crown with our riders finishing first and second, Yamaha winning the Manufacturers title and with Movistar winning their first MotoGP world title with the Movistar Yamaha MotoGP team. It is therefore only appropriate that we officially commence the 2016 MotoGP season by presenting the new bike and team livery at the second headquarters of Telefónica, the Torre Telefónica Diagonal 00 in Barcelona.

“With Jorge Lorenzo and Valentino Rossi as riders, the unchanged Movistar Yamaha MotoGP team crew and the stunning new YZR-M1 bike we are confident that we will have all that we need to challenge to retain our three titles. We know that our competitors will be out for revenge and we can never underestimate the efforts that they will apply to try to dethrone us. We also know that the new regulations and change of tyre supplier will add more variables to contend with but we are committed to the challenge and planning to give our maximum effort to win the 2016 title.

“When we return to Spain for the final GP race at Valencia GP in 10 months from now we will complete another global journey full of stories, emotions, experiences and victories having achieved our corporate mission of revving peoples hearts all around the World.”

“Revealing the bike and the team is always a very special occasion. After the winter break it’s nice to greet the team again and it’s almost as if we never had a stop between the seasons at all; everything falls right back into place. The revealing of the bike is something I’ve looked forward too for many weeks. After my strong performance last year I’m very motivated and I’m itching to get back aboard my YZR-M1.

“I really love the 2016 livery and I can’t wait to put the YZR-M1 to action. With a new season come new challenges and I am sure we can overcome all trials that will come our way. I have spent a big part of the winter break training to be a 100 per cent prepared to defend the MotoGP World Championship Title. Last year our package was very strong and we broke and equaled many records. We also got to climb on many podiums and I am certain we will see plenty more of that this season. Last year may have been a year with some ups and downs for me, but this has allowed me to learn to keep fighting until the end and I think we can use it to our benefit this year. Bring on the first test in Sepang!”

“It may be my 17th season in MotoGP’s premier class, but the start of the season is always exciting for me. I have a very special relationship with my YZR-M1 and the launch of the team is like unwrapping a late Christmas present! When you’re doing the team presentation, you know that the start of the season is just around the corner. I had a very strong season last year and my hunger to win has only grown since then. Finishing second two years in a row shows how consistently strong my riding and the Yamaha team is and this year we’re going to raise our level even further. Yamaha has put in a lot of effort during the winter to get the bike in top shape, and I trained strenuously to be ready to start work at the first test in Sepang. We are competing against the best riders and teams in the world, so we’ll have to push to the maximum every step of the way, starting with pre-season testing.

“The 2016 livery is really eye-catching and I like it a lot, seeing the bike only made me want to ride it more, but unfortunately I have to wait a little longer… I look forward to starting work with my team again. Like last year, we will give our all to achieve the best possible results. It will be interesting to see how we get on with the new ECU software and the Michelin tyres, I’m confident that we can make it another great year and will be able to challenge for victory.”