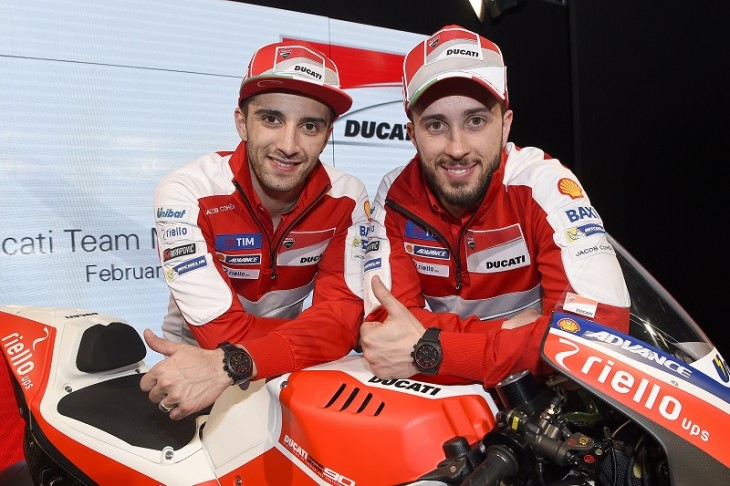 The 2016 Ducati Team was presented today in the Ducati Auditorium, Borgo Panigale and the the livery of the new Desmosedici GP, the bike with which the factory riders Andrea Dovizioso and Andrea Iannone will be taking part in the 2016 MotoGP World Champiosnhip, was revealed.

Claudio Domenicali (CEO of Ducati Motor Holding) declared: “2016 will be our fourteenth year in MotoGP, and today’s Ducati is certainly a different company from when we made our debut in 2003. It is a healthy, solid company that has grown in a significant way, one that now has 1540 employees throughout the world and which in 2015 reached a sales record of more than 54,000 bikes delivered. The team launch, which marks the start of a new racing season, is an exciting and important moment at the same time. I have a lot of faith in Gigi Dall’Igna and in all the people who with their commitment and their devotion make our dream come true. All of Ducati Corse, together with Andrea Dovizioso, Andrea Iannone, Michele Pirro and an exceptional test-rider like Casey Stoner, are extraordinarily valuable due to their talent, expertise and the team spirit that they represent: that of the true Ducatisti.”

Luigi Dall’Igna (Ducati Corse General Manager) added: “The Desmosedici GP that we are presenting today in its definitive livery is an evolution version of the bike that we used throughout last year. In this season there have been some important regulation changes: the unified software and the new Michelin tyres, and so the most important part of the work has been to adapt the bike to these changes. Our aim for this year is to be constantly together with the leaders in all rounds of the championship. In 2015 we obtained eight podiums with the factory team with four second places, but we did not always have the same consistency in our performance during the season. This year however the aim is to always fight for the leading positions and get back to winning races again. We know that it is an extremely ambitious aim, but we are used to accepting the most difficult of challenges.”

Andrea Dovizioso (Ducati Team rider): “I am really excited about the 2016 championship, because we have a very important season ahead of us. This will be my fourth year in Ducati, and I believe that we have everything we need to aim big, especially after all the work we’ve been doing over the winter. I immediately found a good feeling with the Desmosedici GP, and I could see the positive aspects of the new bike. We still need a bit more time to fully adapt to the new Michelin tyres, but the early feelings are very good and so I’m optimistic.”

Andrea Iannone (Ducati Team rider): “I began my career in MotoGP with the Pramac Ducati team in 2013 and this will be my second year with the factory team. I will start the season aiming to improve the good results I achieved in 2015, and for sure I will give my all throughout the season, trying to make progress race after race. I tested the new Desmosedici GP at Sepang and Phillip Island and my first sensations are positive. I believe that it will be a very competitive bike and allow us to achieve the aims to which we aspire and I can’t wait to get going.”

The team launch was broadcast in live streaming in collaboration with TIM, offering media and numerous fans throughout the world the possibility of following the event.

In a few days’ time the Ducati Team will be leaving for Qatar where the third and final IRTA pre-season test session will be held at the Losail International Circuit.