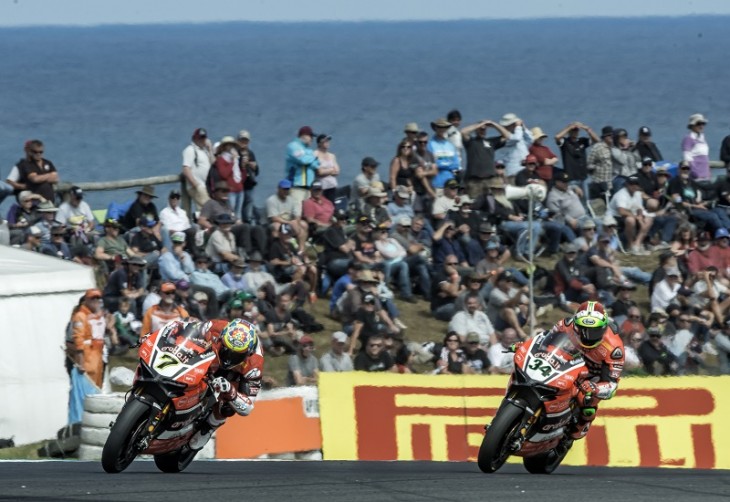 The World Superbike Championship kicked off the 2016 season in a spectacular fashion in Phillip Island. After a hard-fought Superpole, with Davide Giugliano and Chaz Davies in second (+0.078) and ninth (+0.697) position respectively, Race 1 was decided only in the final meters.

Thanks to a scorching start, Davies quickly recovered the gap and reconnected with his teammate Giugliano at the front. The two Aruba.it Racing – Ducati team riders then engaged in a tough yet fair battle with Jonathan Rea and Michael Vd Mark, consistently lapping in the high 1:31 mark and progressively pulling away from the group. After a brief, non-belligerent phase at half race distance, the four forced the pace further with five laps to go, with Davies right behind Rea and Giugliano quickly in tow, trying to recover the few tenths he lost due to a small mistake in turn 4.

During the last lap, Davies tried the definitive move on Rea with three corners to go, provisionally taking the lead but eventually being re-passed in the following direction change. The Welshman missed the victory by only 63 thousandths of a second. Giugliano, on the other hand, showed his characteristic grit but also an improved consistency, posting the best lap-time of the race in the final lap with a 1:31.445 and finishing in fourth position, less than two tenths of a second from the podium.

Chaz Davies (Aruba.it Racing – Ducati) – 2nd
“It was a fun battle, with many hard but fair moves. I planned to pass Rea in turn 10, but he widened his line just a bit and I was forced to get into the corner a bit too tight. I was already on the limit with the front tyre and I had to release the brakes for a moment, so he passed me again. Still, I’m very happy. Compared with last year, we’ve made big improvements with the electronics and I was much more comfortable towards the end of the race. The battle with Rea could have gone either way, and now I’ll think of a new strategy with the team. The goal is to go one better tomorrow.”

Davide Giugliano (Aruba.it Racing – Ducati) – 4th
“It’s been an awesome race, both for us and the fans. This track was associated with bad memories for me, given that I had a bad injury here during the pre-season tests one year ago. Today, I barely missed pole position and fought for the podium until the very end. I’m satisfied, as it was my first race since my back injury seventh months ago. The podium was within our reach, but unfortunately I made a small mistake in turn 4 with a few laps to go and lost contact with the front. Together with the team, I worked hard to find a setup that allows me to be consistent for the whole race distance, and to do the fastest lap at the end represents a positive confirmation. We’ve made a big step forward, and we need to keep working in this direction to be even more competitive tomorrow.”

Stefano Cecconi, Aruba S.p.A. CEO and Team Principal
“We missed both Superpole and the victory in Race One by only a few thousandths of a second. It was undoubtedly a positive start to our season, with a thrilling battle that made us hold our breath until the checkered flag and confirmed both the level of the team and the quality of the work done during the winter break. But, we won’t settle and will aim even higher tomorrow.”