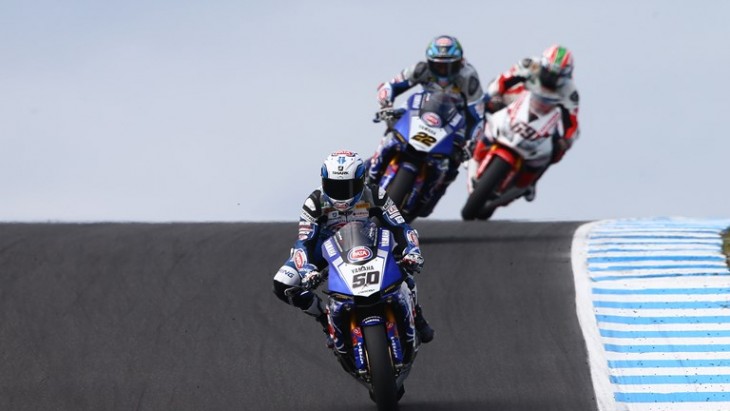 An exciting and closely-fought first MOTUL FIM Superbike World Championship race of the season at the Australian Phillip Island Grand Prix Circuit saw Pata Yamaha Official WorldSBK rider Sylvain Guintoli cross the line in sixth place, as he narrowly missed out in the determined fight for fifth with a photo-finish at the chequered flag. Alex Lowes was running an equally strong race, matching his teammate in pace and position, before a turn two crash put paid to his debut on the YZF-R1.

A new schedule for the WorldSBK Championship saw Guintoli and Lowes arrive at Phillip Island for their opening race day of 2016 without knowing where they would be starting the contest. The morning began with 15 minutes of free practice, allowing the riders to warm up their Yamaha YZF-R1s, before the important action of Superpole qualifying took to the 4,445m Australian circuit. His 11th place classification from Friday’s track-time saw Lowes take his place in Superpole 1, easily securing his promotion to Superpole 2 with a spectacular 1’30.9 lap set on race rubber in the early stages of the 15 minute session. Joined by his teammate Guintoli for Superpole 2, both Pata Yamaha riders set about the task of competing in the top-12 shootout and with five minutes gone, they sat in second and third positions with times matching those of their previous, weekend’s best. As the field returned to the track on qualifying tyres the times began to tumble, a 1’30.281 and 1’30.354 respectively granting the French and British rider fourth and fifth on the grid.

Heading up the second row for the debut race of 2016, the Pata Yamaha Official WorldSBK Team started the 22-lap battle strongly with Lowes firmly in the front group for the initial laps. Mid-race saw both Yamaha riders prevented from utilising their pace as effectively as they would have liked. Taking the opportunity to pass one rider with eight laps to go, first Guintoli then Lowes looked to exploit the free air but unfortunately for the latter it was short lived – an issue at turn two resulting in a trip through the gravel.

Guintoli’s sixth place finish leaves the 33-year-old with 10 Championship points and sitting sixth in the table heading into the second day of competition, with Lowes looking to secure a strong points-scoring finish from Sunday’s race.

“Sixth is a steady start to my 2016 WorldSBK campaign on the YZF-R1 but to be honest it was quite a frustrating race for me. I had a lot more pace that I was able to show, as I was blocked by slower riders for much of the opening laps. Despite that, it is a solid result to build on and we will keep working to improve overnight for tomorrow’s race. There are definite positives to take from the first race, the YZF-R1 holds the tyre life well round here so just a few changes to advance the performance and we will see what we can achieve on Sunday.”

“I’m disappointed to start the season with a crash at Phillip Island. I was feeling comfortable on the YZF-R1 after the work spent in practice here over the past week and a strong qualifying. We have made some good progress already and will continue to work step-by-step tonight but I’m looking forward to a stronger finish and a second chance at some good points in the race tomorrow afternoon.”

“So the Pata Yamaha Official WorldSBK project has started! Following a very strong qualifying performance by both riders, we were perhaps ‘hoping’ for more from today’s race but we also have to be realistic in terms of the development process and our competitors’ level. For Sylvain to finish sixth was frustrating for him, but this was only 3.5 seconds from the winner, and the YZF-R1’s strong points – and those that must be improved at WorldSBK level – are becoming increasingly clear. So not a bad start!

“Alex’s late exit from the race was unfortunate but again we have to take the positives. He made a huge step forward today, improved his style to suit the bike considerably and had a great pace. We will make some changes for the race tomorrow that are sure to help.”