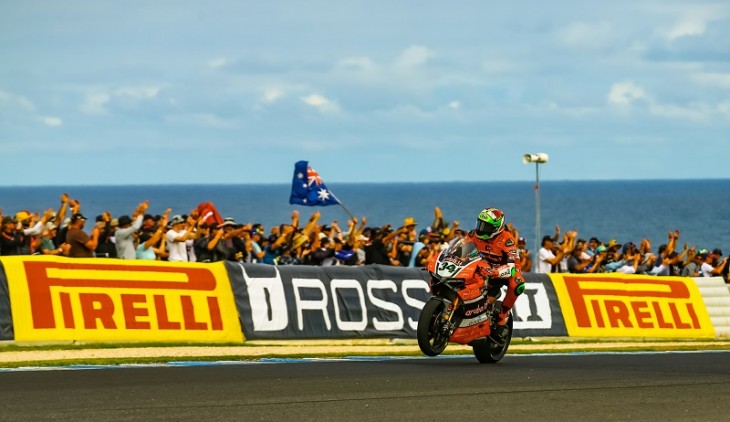 After yesterday’s second-place finish with Chaz Davies, the Aruba.it Racing – Ducati team stepped on the podium once again in Phillip Island with Davide Giugliano. The Italian rider took third place thanks to a late push, while his teammate Chaz Davies crashed out with a few corners left to go while fighting against Jonathan Rea, who eventually took the victory, finishing in 10th place.

The race itself was similar to the one held on Saturday, with a tight group fight in which both Giugliano and Davies showed their grit. Due to a fortuitous contact between Giugliano and Sykes with six laps to go, Davies and Rea were able to create a small gap. The Welshman took the lead with one lap to go but could not pull away, and lost the front at turn 4 while trying to pass his rival on the brakes. Giugliano, on the other hand, stormed back in the late phases, passing Sykes, Guintoli, and finally Hayden with a spectacular move in the penultimate corner. The Italian, at his first official outing in seventh months after a serious back injury, thus claimed his first podium of the season.

The Aruba.it Racing – Ducati team will be on track once again in two weeks’ time in Chang (Thailand) for the second round of the season.

Davide Giugliano (Aruba.it Racing – Ducati #34) – 3rd
“Today I struggled a bit more with the heat, which made us lose some grip. I was expecting it, and therefore kept some margin for the final laps, but touching with Sykes made me lose ground. Still, I kept pushing and I’m really happy with the final outcome. This podium stems from hard teamwork, and I think the crew contributed to 60 percent of it while I did the rest. I dedicate this to my family, who supported me throughout the most difficult times. I also want to thank Ducati, which is helping me to improve professionally. Now I only want to focus on the present and future.”

Chaz Davies (Aruba.it Racing – Ducati #7) – 10th
“Usually I’m able to brake pretty deep, but this time unfortunately I found the limit of the front tyre. I knew it was a risky move, and ideally I wouldn’t have had to try it, but unfortunately Rea erased the small gap I built on the straight. Anyway, I’m not disappointed about my race. We fought for the victory in both races and the bike showed much improvement since last year, especially with the electronics. We just need a bit more top speed.”

Ernesto Marinelli, SBK Project Director
“I’d say the final evaluation is 75 percent positive. We know we’re competitive but we need to erase the gap on the straight to give our riders more margin, so we have our work cut out for us at home. Chaz rode two great races. Unfortunately, he wasn’t able to finish the second one. I knew he’d try to pass, but in those conditions there’s a really fine line between making the turn and crashing out. Also, I’m really happy about Davide’s performance. He showed great poise and consistency, something on which we’ve worked on throughout the winter. It was great to see him on back the podium at the very first round.”