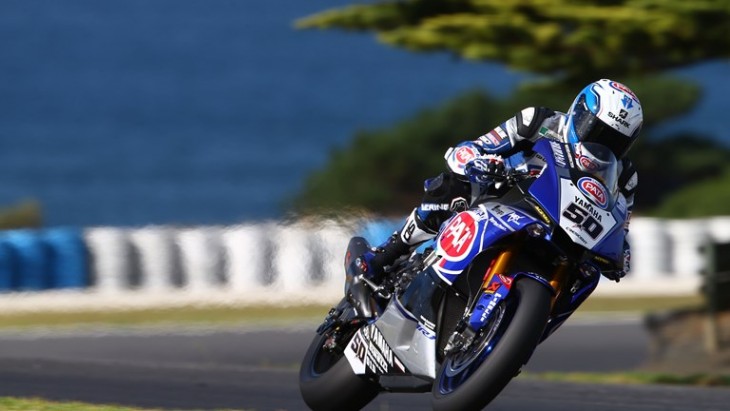 Guintoli’s lowside crash at turn two, with just over twenty minutes of the day’s track time remaining, wasn’t enough to keep the Frenchman from completing the session on top – his 1’31.940 set on his 14th lap. The number 50 rider continued the comprehensive work started with his Yamaha crew over the winter, fine tuning the chassis and electronics settings further across the eight hours of track time, and with 2016’s opening race now just days away, his top-five position in the overall combined times leaves him positive for the season to come.

Lowes concentrated on adapting his riding style aboard the YZF-R1 to Phillip Island’s demanding 4,445m circuit, while carefully testing his shoulder’s fitness after his winter rehabilitation. Two months of hard work in the gym by the British rider matched that of the Crescent and Yamaha staff in the workshop, as Lowes concluded the two day’s with 116 laps and a fastest time of 1’31.620 under his belt.

Careful progress and evolution over the winter by the Yamaha Motor Europe and Crescent technicians paved the way for a positive outcome to the collaboration’s opening official engagement, as temperatures soared from Monday’s high of 24°C, reaching 38°C by the mid-afternoon session and heating the asphalt to a blistering 41°C.

The Pata Yamaha Official WorldSBK Team now have two days of final preparation ahead of them before Lowes and Guintoli return to the Phillip Island Grand Prix Circuit for the opening race weekend of the 2016 MOTUL FIM Superbike World Championship, commencing on Friday 26th February.

“A good two days here at Phillip Island, the test has been really constructive. I’ve tried lots of solutions that are working well – we ended up getting closer and closer to the leaders and ended up topping the last session so that felt good! I had a small crash at the end but nothing to worry about. The pace was really good and I felt comfortable, probably a little bit too comfortable, but in the end it was all good. I’m looking forward to the weekend now, it will be good to get struck in and do some racing! This track really suits the character of the YZF-R1, the bike is fantastic to ride here – with the change of direction and the long, fast corners – it’s really sweet and efficient to ride. It’s really important for our work for the first two races now not to just concentrate on one-lap pace – as Phillip Island is a very long and demanding lap on the tyres – but we’ve done a good job so far. As for the crash I really needed to get that out of the way as I hadn’t crashed at all during the winter tests in November and January so I needed to have one and that’s done. Now we’re ready to start racing!”

“I’m learning a lot here at Phillip Island. There is still a lot to do and I’m not riding the bike the way I need to round here, but it’s going good. I felt better in the hot conditions this afternoon that I did this morning, so it’s a bit difficult for me to understand clearly what has worked better as the track took quite a drop but overall I’ve learnt a lot. We are still continuing the work from the winter tests and concentrating on everything including my feeling with the bike and my riding style. I’m trying to take a step-by-step approach, not get carried away and not try too hard on testing as it’s the first time I’ve been able to do some real laps since damaging my shoulder, so I’m happy about that and it doesn’t feel too bad. I need to adapt my riding style more to the YZF-R1 so I still have quite a bit to learn but I’m hoping to peak at the right time come race weekend!”

“It’s been a great pleasure to start working with Yamaha at this first official event of 2016. The Phillip Island test has a reputation for being brutal to both bike and rider so we are very pleased to have come through the two days with the YZF-R1 in quite competitive shape and two fit and motivated riders. Sylvain has been very comfortable and very competitive from the start and in eight hours of work, the only small issue he faced was a crash towards the end of Tuesday afternoon, but it hasn’t dented his confidence or his fitness and even the bike escaped quite lightly which is unusual for Phillip Island.

“Alex has been a little bit less comfortable with the bike and has struggled to find as good a balance as Sylvain but has worked very methodically and very thoroughly with the Yamaha engineers and his own crew to take steps forward, which was reflected this afternoon.

“It really makes zero difference in terms of race result predictions but for Sylvain to be quickest and Alex third in the final session of testing here has been a very encouraging way to start Pata Yamaha WorldSBK Team’s inaugural season.”