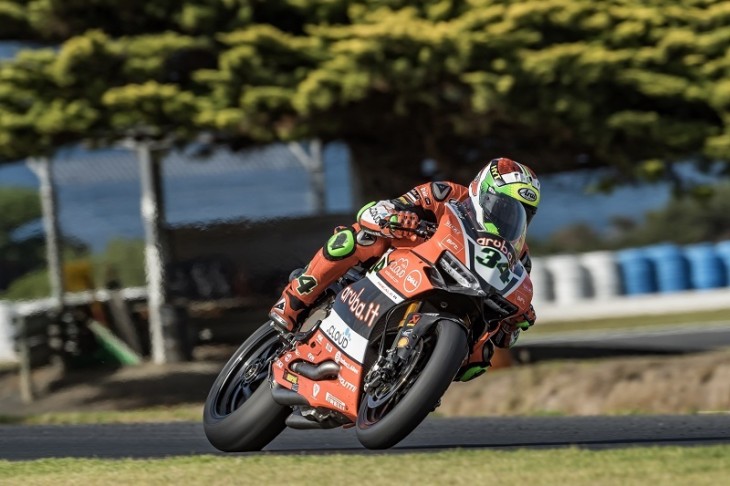 After a first day of pre-season tests characterized by grey skies and intermittent rain, the Aruba.it Racing – Ducati team hit the track again in Phillip Island in radically different climatic conditions. The air temperature rose to as much as 38 degrees (41 Cº on the tarmac) and, in combination with strong winds, it made it progressively more difficult to find pure speed. To this end, both riders focused on race distance, and more specifically tyre wear on the notoriously demanding Australian track.

Davide Giugliano (85 laps overall) still managed to improve his lap times by four tenths of a second, finishing third in the combined time sheets, 0.303 seconds behind leader Tom Sykes. Chaz Davies, still slightly sore after yesterday’s crash, opted for a more cautious approach in the morning session and – as the vast majority of riders – could not improve his performance in the afternoon heat, closing the tests in tenth position overall (+0.581) with 97 laps to his tally.

The Aruba.it Racing – Ducati team will resume action on Friday for the first official free practice of the 2016 season (scheduled for 10.15 local time, 00.15 CET).

Davide Giugliano (Aruba.it Racing – Ducati #34) – 1’31.400 (3rd)
“In general, I’m pretty happy about these tests. Especially, about the competitiveness shown this morning, when the climate conditions were similar to those that we should find during the race week-end. We just lack a bit of grip in the center of the corner. Unfortunately, I could not do a long-run in the afternoon because of the weather. The extreme heat does not suit a flowing riding style such as mine, and there were so many crashes and red flags that I preferred not take risks. Still, I managed to do 22 laps on the same tyre with a competitive pace.”

Chaz Davies (Aruba.it Racing – Ducati #7) – 1’31.678 (10th)
“In the morning I focused on getting back the feeling and confidence on the bike after crashing out towards the end of yesterday’s session. I also did a race simulation, whose results were quite good. Our gap from the leaders has been reduced, and honestly I think I could have pushed more, both myself and the Panigale R. In the afternoon it was impossible to improve the lap times, as the temperature went through the roof, but today the general goal was simply to verify the competitiveness of our package without crashing, so I feel confident ahead of the race week-end.”

Ernesto Marinelli, SBK Project Director
“These last two days of tests have been really important. Phillip Island is a peculiar track and it’s never easy to find a setup that allows the tyre to safely make the difference over the race distance. Davide, Chaz and their crews worked well, we’re still missing something in terms of a flying lap, but we’ve found a setup that allows us to be very consistent. I’d say that we laid a solid foundation for the upcoming race weekend. It won’t be easy and we’ll have to adapt to weather conditions, which can be pretty erratic as today has shown. Still, we’re confident we can do a good job, and we enthusiastically await the 2016 season opener.”