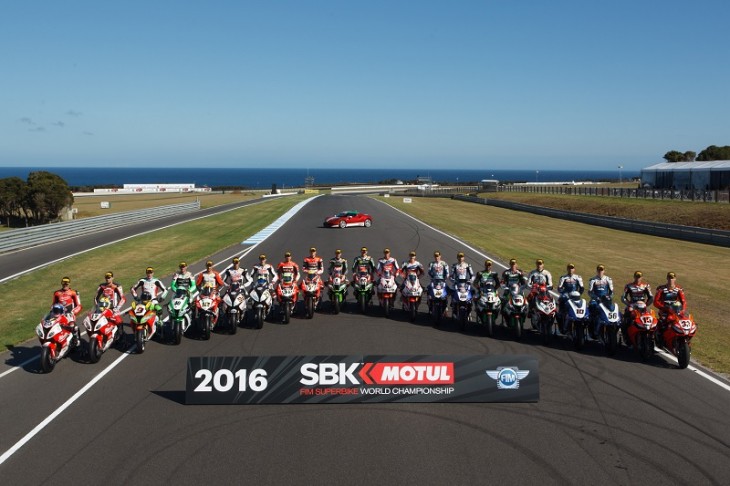 The WorldSBK paddock was today welcomed to Phillip Island Grand Prix Circuit by owner Fergus Cameron, inaugurating what is to surely be another fantastic season of racing.

WorldSBK and WorldSSP riders then attended a pre-event in Cowes on Phillip Island ahead of the opening Round of the 2016 MOTUL FIM Superbike World Championship, trying their luck at sandcastle building and paddle boarding.

Team Rea ended the first half with a well-designed and professional sandcastle, but competition was tough from the likes of Hayden and Brookes. Hayden’s soft toy penguin on his castle, an homage to Phillip Island, seemed like the winning detail until he was pipped at the flag by Australia’s own Josh Brookes. Brookes, in the dying seconds, swept through to victory by virtue of a small-scale erupting sand volcano, wowing the judges and sealing the win.

Part 2 saw the junior teammates of each rider tag them as part of a relay and set the riders running into the water to paddle board to a buoy and back. Leon Camier, by virtue of a stunning start, took an early lead that would prove decisive and the MV Agusta rider took victory in the second half of the challenge, setting himself up perfectly for the weekend of racing that kicks off tomorrow at Phillip Island Grand Prix Circuit.

The first Round of the season is now only hours away, with Friday sessions now providing riders in WorldSBK with the chance of qualifying for the Tissot-Superpole 2 session to fight for grid position. This weekend marks the dawn of a new era in WorldSBK, with the first race of the season now to be held on Saturday, and bikes will be on track for the first time at 1015am on Friday to get the action underway.