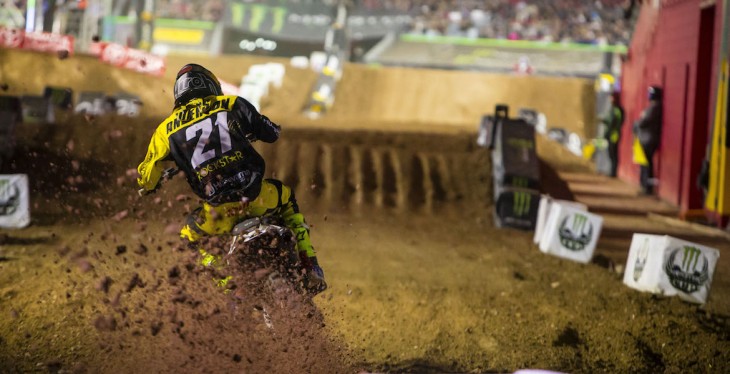 San Diego has been a championship staple for Monster Energy Supercross since 1980, hosting 33 races over the last 36 years.

The Military Appreciation Race is exclusive to San Diego and was created out of respect for the strong military community throughout San Diego County. It has grown to be one of the sport’s most embraced initiatives and this year Monster Energy Supercross is partnering with USO San Diego to give back to our country’s service men and women.

The annual visit to San Diego was held at Qualcomm Stadium from 1980 to 2014. Last season Petco Park, located in the legendary Gaslamp Quarter, brought the world’s best riders into the heart of downtown.

Petco Park will host Major League Baseball’s All Star Game in 2016. It was also converted into the world’s most unique golf course this past November with “The Links at Petco Park.”

Chad Reed made his Monster Energy Supercross debut in San Diego during the 1999 season, finishing 17th. Since then he’s amassed the most wins in the city with six, and has compiled an average finish of  2.9 in 14 starts, including 10 podium finishes.

There has not been a repeat winner in San Diego for the past six races. Petco Park has had two different winners in its first two races.

During the first 20 years in San Diego, riders that won the race went on to win the championship half of the time. Over the last 12 years it has happened just four times.

Reed, Davi Millsaps and James Stewart have combined to win all but three San Diego races since 2003.

Riders to Win in Both Classes in San Diego

Past Winners in San Diego

The rider to win in San Diego has gone on to win the Western Regional Championship 13 times in 29 seasons.

Mickael Pichon is the only international rider to win a 250SX Class race in San Diego.

Past Winners in San Diego