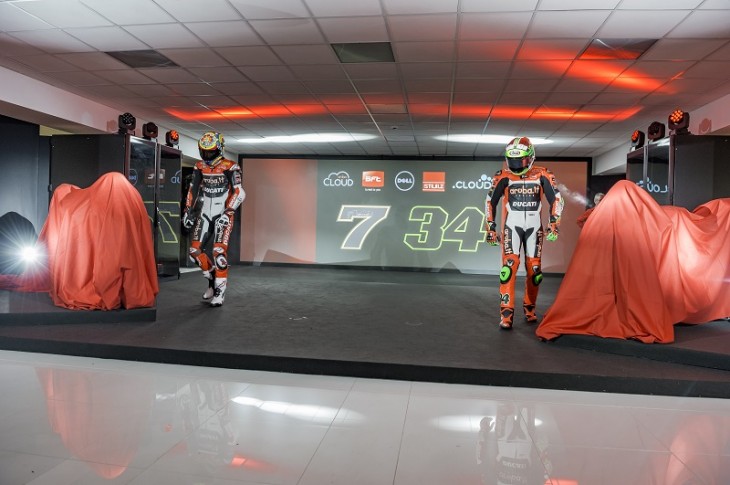 After a memorable 2015 – with the first win for the Panigale R at Aragon and second place in the Riders’ and Manufacturers’ championships – the 2016 Aruba.it Racing – Ducati Team was launched today at the Aruba Data Center in Arezzo, where the adventure began twelve months ago. Chaz Davies and Davide Giugliano took the wraps off the factory Panigale R bikes and the team laid down an even more ambitious challenge for this year’s Superbike World Championship.

During the event the sporting programme and the technical changes for the production-based championship that gets underway on February 28th at Phillip Island in Australia were illustrated to media, team sponsors and partners. The project resumes under the watchword of continuity, with Davis and Giugliano both confirmed, and several innovations in the technical staff and on the bike.

Stefano Cecconi (CEO Aruba S.p.A and Team Principal): “Twenty-one podiums and five wins in 2015 enabled us to finish second in both the Riders’ and Manufacturers’ championships, giving us great satisfaction. But we are not settling for that result, and we will try and go even better this year. From an organization point of view, the collaboration with Ducati and with Feel Racing worked well and I want to thank everyone involved. We began the season on the podium and finished it by always fighting for the win. And it is from that point that we want to resume this season, with the aim of going even better this year, so it was right to not change a winning team. 2015 was a record year for Aruba in terms of results and the Superbike project surely made a big contribution to this, with all the visibility it gave us on a national and international level”.

Claudio Domenicali (CEO Ducati Motor Holding): “I’d first like to thank Stefano Cecconi, our partner in this operation which has given us extraordinary satisfaction. We have seen important results for the team, important economic results for Aruba and it was also the best-ever year in the history of Ducati. In 2015 we sold more than 54,000 bikes, a record, with an increase of 22% over the previous year. It’s a result that has come about thanks to the numerous new models we launched, a new range of Scramblers, but also due to the results on the track, which for all Ducatisti is an important element. I would like to underline a fact that is often neglected: the importance of Superbike for a manufacturer like Ducati. Racing with a production-based bike allows us to develop products that are quite simply extraordinary. The Panigale R has no rivals in the sportsbike sector. Superbike is a championship that is in the hearts of Ducati and all Ducatisti”.

Luigi Dall’Igna (Ducati Corse General Manager): “In my first two years in Ducati we have tried to improve the flow of information between MotoGP and SBK, something that allowed us to improve on both fronts. For 2016, the SBK team has a few changes. We have brought Marco Zambenedetti, an engineer who comes from MotoGP, into the team and on Giugliano’s side of the garage two very experienced technicians, Aligi Deganello and Paolo Biasio. The Panigale R has undergone further developments in its suspension, electronics and engine. We were protagonists in the winter tests, something that allows us to start 2016 with one aim: to win the title”.

Chaz Davies (Aruba.it Racing – Ducati #7): “Last year was full of satisfaction. To be the first rider to win a race with the Panigale R meant a lot, not only for me but also all of Ducati and the many Ducatisti all over the world. We improved all the time and gradually achieved a package that was competitive at all circuits. This was exactly the same during the winter tests, where with the latest evolutions in suspension and electronics, we could focus on performance over the distance. I am optimistic and can’t wait to start the championship”.

Davide Giugliano (Aruba.it Racing – Ducati #34): “After a difficult season, we are now looking ahead with optimism. Many things have changed, both on the bike and in my team, and I’d like to thank Ducati for this opportunity. I’m starting to work well with Aligi and Paolo, my new crew chief and electronics technician. In the last test I was once again as quick as the top guys. I’m optimistic and can’t wait to go to Australia”.

The event was broadcast in streaming on www.arubaracing.com and www.ducati.com, offering media and fans throughout the world an opportunity to follow live.

The Aruba.it Racing – Ducati Team will now be leaving for Australia, where the usual round of pre-season tests at Phillip Island will be held, just a few days before the start of the 2016 championship on February 26-28 at the same circuit.