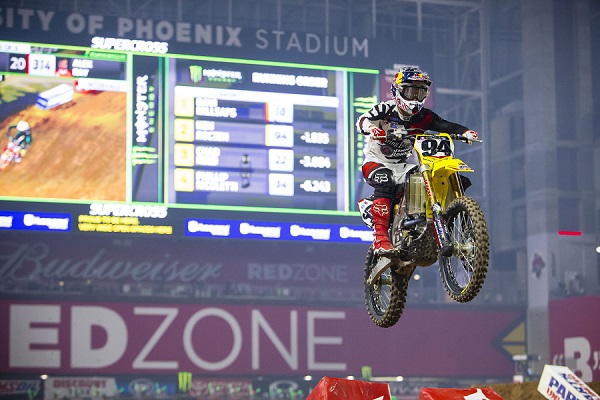 Roczen gets his first win of 2016 at The University of Phoenix Stadium.
Photo Credit: Jeff Kardas

Some key insights to watch heading into this Saturday night’s race include:

Last Saturday night at Monster Energy Supercross’ debut from University of Phoenix Stadium, Roczen passed SupercrossLive.com Holeshot Award winner Davi Millsaps and his BTO Sports/WPS/KTM on the opening lap and went on to lead all 20 laps of the Main Event. It was Roczen’s fifth career win and his first since the second race in Anaheim in January of the 2015 season, 18 races ago. He missed the final eight races of last season with injury.
“We have been working really hard and it paid off,” said Roczen, who now has a three-race podium streak, the second longest behind Dungey. “This was a tough track tonight. We got the job done.”

Dungey finished second, following a 10th-place start, and has finished no worse than second in every race this season. His points lead sits at 21 points over Roczen, the same amount as his current podium streak.

“I made some good, clean passes after that bad start,” said Dungey. “I made passes where I could and had a great race.”

Roczen moved to second in the standings with his win, but second through sixth in the championship are only separate by 15 points.

The Western Regional 250SX Class Main Event welcomed the sport’s newest winner, with GEICO Honda’s Christian Craig breaking through to become a second-generation victor with his dad, Mike Craig. GEICO Honda’s Jimmy DeCotis earned the SupercrossLive.com Holeshot Award to start the Main Event, but was soon passed by Craig. Webb made a surge into second after starting seventh, and battled with Craig for the lead before going down. Webb never lost a spot, but couldn’t reel Craig back in.

Craig last contested Monster Energy Supercross in 2013 and came out of retirement for the 2016 season. He earned his first career podium two weeks ago and has now finished in the top three for three straight races, currently the longest in the championship. That consistency has moved him to third in the standings.

“To come out of retirement and get my first win ever is amazing,” said Craig, who last raced full time in 2013. “On the last lap the crowd was so loud; it was awesome.”

Webb’s runner-up effort helped him bounce back from a 21st-place finish the week prior, and put him into a tie with Savatgy atop the championship standings. Savatgy finished third in his first race as points leader. Both riders will carry red number plates on their bikes in San Diego.

“I didn’t get a great start so I was playing catch up,” said Webb. “Then I crashed and threw away any hopes of getting the win.”

The Military Appreciation Race will honor our service men and women by partnering with the USO San Diego, donating $5,000 to the non-profit. Additionally, the hugely popular rider auction will continue for a third year, featuring exclusive one-of-a-kind gear worn by the stars of the sport at this special race, including Eli Tomac, whose brother Greg is an officer in the U.S. Air Force, last year’s winner Trey Canard, reigning Monster Energy Supercross Champion Ryan Dungey, Ken Roczen, Chad Reed and more.

Members of the military can save $10 off tickets to the Military Appreciation Race by using the code SDUSO (additional fees may apply). Additionally, all military members will receive free access to the Party in the Pits, where they can meet the riders and see the bikes in what is an essential part of the Monster Energy Supercross experience.

Last month in San Diego for the second race of the 2016 season, Dungey captured his first win of the season, which also signified his first win in San Diego. It moved him into the points lead and kicked off a three-race winning streak that ended last weekend. He, along with Team Honda HRC’s Trey Canard, will each be looking to become the first two-time winner at the stadium.