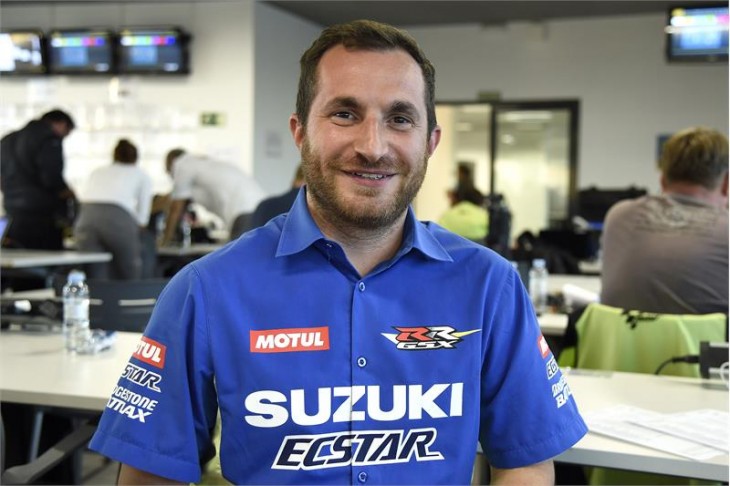 Team Suzuki Press Office – February 9. The MotoGP™ World Championship is a series that has huge relevance all around the world, being one of the most-followed and exciting sports. Every event, from the winter tests to each one of the 18 races, gathers the interest of millions of fans who follow their champions at the circuits, watching on television, reading the news; or more-and-more important in recent years, via the internet. It’s a huge and continuous flow of news and images that starts at the circuit and spreads all around the globe. For this reason the management of information and news is crucial, as well as managing the promotional appearances of the riders. For this activity Team SUZUKI ECSTAR enrolled in their crew Italian Federico Tondelli, who is in charge of the management of press and communication activities.

Following the opening 2016 MotoGP™ test at Sepang, Malaysia last week, Tondelli reflects on his first year with the team and looks forward to the start of his second season with Team SUZUKI ECSTAR that kicks-off on March 20th at Losail International Circuit in Qatar.

“My background is in strategic communication and journalism. I’ve worked as strategic planner in digital and non-digital communication agencies and also was a contributor journalist for some Italian magazines and websites. My arrival in Team SUZUKI ECSTAR looked like something that only usually happens in movies; the first time I met Davide Brivio, the Team Manager, was in 2013 in Misano, when it was too early to talk about the marketing crew. We left with the hope of keeping in touch, but then in 2014 I took a break from the journalistic activity and we hadn’t any follow up. Then in February 2015 his call came as a coincidence, when I was completely re-planning my personal and professional life. This allowed us to draft a partnership in a very short time, meaning that in less than 15 days after the phone call, I was flying to Sepang for the second test. It has been a very quick start, it was my very first experience in a Factory MotoGP team and the activities were very demanding, but I found a very professional environment and many experienced people who made me feel “in a family” very soon.”

What do you do exactly in the Team?

“Basically we could say that I am in charge of the execution of all the communication and PR activities of the Team, reporting to Davide Brivio. This can be summarised in two main tasks; media relations and on-line activities on social networks. The last one is a continuous production of contents, mainly visual (as the videos are forbidden according to the general rule of the championship), which aims to involve the fans and followers in the Team’s life. The main objective is to explain the “behind the scenes” in order to get the team closer and closer to its supporters. We started from zero and got positive results in our first season with more than 55k fans on Facebook and more than 20k between Twitter and Instagram, with peaks of over two millions organic reach with some content; in particular all those hashtagged with #MotoGPtech which was a new initiative by us. Particularly for a factory team, MotoGP™ is a vehicle to promote the Suzuki brand itself, therefore everything to do with public relations is handled by myself; meaning the set-up of all interviews and press releases, the distribution of news to journalists and the monitoring of what the media say about us. This part of the job deals with the production of content but has a lot to do with diplomacy and you have to be not only a good writer but most of all an excellent listener.

Assuming this was your first experience, how would you rate your 2015 season?

“To me being in Team SUZUKI ECSTAR is a matter of proudness as it combines my two passions, which are communication and motorbikes. I was not completely new to the MotoGP™ paddock as I had already worked with a Moto2 team, but being in the premier class and in a Factory Team is completely another story. The feelings and emotions changed so quickly and deeply during the early months that I felt like a small boat in a thunderstorm: I still remember the complete astonishment in my first trip to Sepang as well as the sensation of overwhelming I felt when it came to racing the first round in Qatar. When you work with such famous and very experienced team-mates you know you can rely on their support, but you are also aware that you are requested to keep on their pace. Then race-after-race everything becomes easier little by little, because after you start to better understand the dynamics everything runs smoother. One of the good things with our team is that it is a very assorted crew but we all feel like a family, working for the same purpose and supporting each other. Of course the riders are two of the people I work with most of the time and I found in Aleix and Maverick two professionals; they are both ambitious and the early results put them under the spotlight pretty soon, but they are always available to all media activities and this helped me in my daily job a lot.”

What about the upcoming 2016 season?

“The 2015 season was a fresh start for us. With Davide and Hatsumi – my colleague in the marketing department – we have set-up the basic plan and activities, which was a good start but now needs to improve in 2016. Let’s say that the communication office followed the same process as the technical development; a first year to start the engines and now it’s time to step up. Last season we got a lot of attention from the fans and media, which is a good thing, but also a challenge. It was nice to see the affection to the Suzuki brand and the interest in our riders, but this also means that now they are expecting even better performances from me. Pretty much all of our activities had many strengths but also some weaknesses and while the engineers in Japan are working on the technical evolution, here in Italy we are doing the same with the marketing and communication support.”